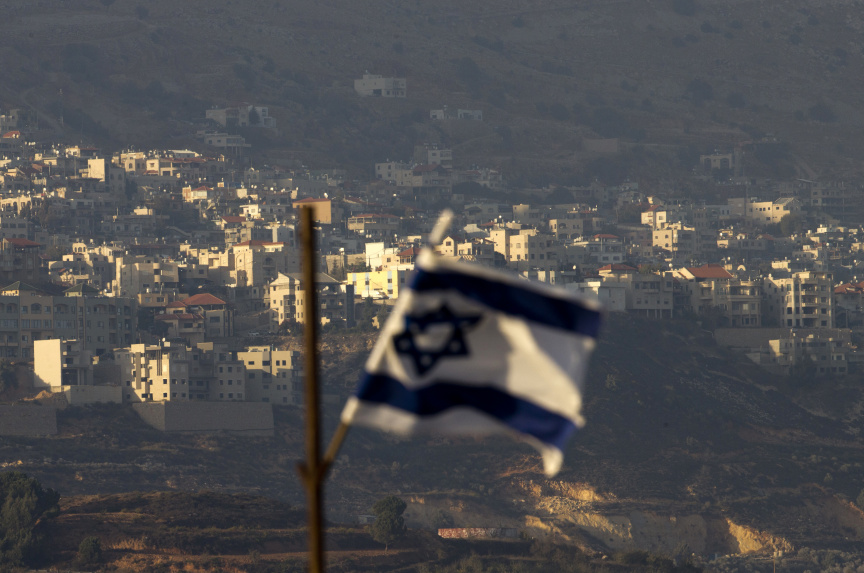 In this file photo dated Thursday, Oct. 11, 2018, an Israeli flag in front of the village of Majdal Shams in the Israeli-controlled Golan Heights.(AP Photo/Ariel Schalit, FILE)

DAMASCUS, Syria (AP) — From Syria to Turkey and beyond, President Donald Trump's abrupt declaration that Washington will recognize Israel's sovereignty over the Israeli-occupied Golan Heights drew strong condemnation on Friday.

The Syrian government called it "irresponsible" and a threat to international peace and stability, while Iran's foreign ministry said it plunges the region into a new crisis.

The Foreign Ministry in Damascus said Trump's statement confirms "the blind bias of the United States to the Zionist entity," referring to Israel, and added that it won't change "the fact that the Golan was and will remain Arab and Syrian."

Trump's announcement the day before was a major shift in American policy and gives Israeli Prime Minister Benjamin Netanyahu a political boost a month before what is expected to be a close election.

The administration has been considering recognizing Israel's sovereignty over the strategic highlands, which Israel captured from Syria in 1967, for some time and Netanyahu had pressed the matter with visiting U.S. Secretary of State Mike Pompeo this week.

Israel unilaterally annexed the Golan Heights in 1981. The U.N. Security Council resolution 497, issued after the annexation, refers to Israel as "the occupying power" and says Israel's attempt to "impose its laws, jurisdiction and administration in the occupied Syrian Golan Heights is null and void and without international legal effect."

"But if you're asking what the U.N. policy on the Golan Heights is, it's very clear," he said. "It's the policy reflected in the resolutions of the Security Council and the relevant resolutions as well of the General Assembly."

Syria's Foreign Ministry later announced that a letter was sent to the presidents of the U.N. Security Council and United Nations over Trump's "irresponsible and dangerous statements over the Golan." The statement urged the U.N. secretary-general to confirm the organization's stance regarding Israeli occupation of the Golan.

In a Friday tweet, Iranian Foreign Minister Javad Zarif took aim at the U.S., saying that if it believes that "persistently violating int'l law, bullying sovereign nations & milking its clients projects strength. It does not. Its recklessness just displays panic of an empire in decline."

Arab League chief Ahmed Aboul Gheit also criticized the American stance, saying it "comes outside the international legitimacy and no country, no matter how important it is, can make such a decision."

Turkish President Recep Tayyip Erdogan said Trump's "unfortunate" declaration has brought the region "to the brink of a new crisis and new tensions."

"We will never allow the legitimization of the occupation of the Golan Heights," Erdogan added.

Egypt also issued a statement, saying the Golan is occupied Arab territory and calling for respect for international resolutions.

"The very idea is not helping the goals of the Middle East settlement, quite the other way round," he said. "Right now, it's merely a declaration. Let's hope it will stay this way."

In Germany, government spokeswoman Ulrike Demmer said there was no change to Berlin's position on the Golan Heights, pointing to the 1981 U.N. resolution. She said Germany opposes "unilateral steps," but is well aware of the territory's significance to Israel.

"A peace settlement would have to take account of Israel's very justified security interests and of course stop once and for all the potential dangers to Israel from the Golan Heights," Demmer said. "But for the present, the tensions that already exist should not be deepened."

The U.S. will be the first country to recognize Israeli sovereignty over the Golan, which the rest of the international community regards as territory occupied by Israel whose status should be determined by negotiations between Israel and Syria. Attempts to bring Israel and Syria to the table have failed.

It was not immediately clear how a U.N. peacekeeping force that is in place in the Golan might be affected by the U.S. move. That force's mandate expires at the end of June.

There had been signals that a U.S. decision was coming. Last week, in its annual human rights report, the State Department dropped the phrase "Israeli-occupied" from the Golan Heights section, instead calling it "Israeli-controlled."