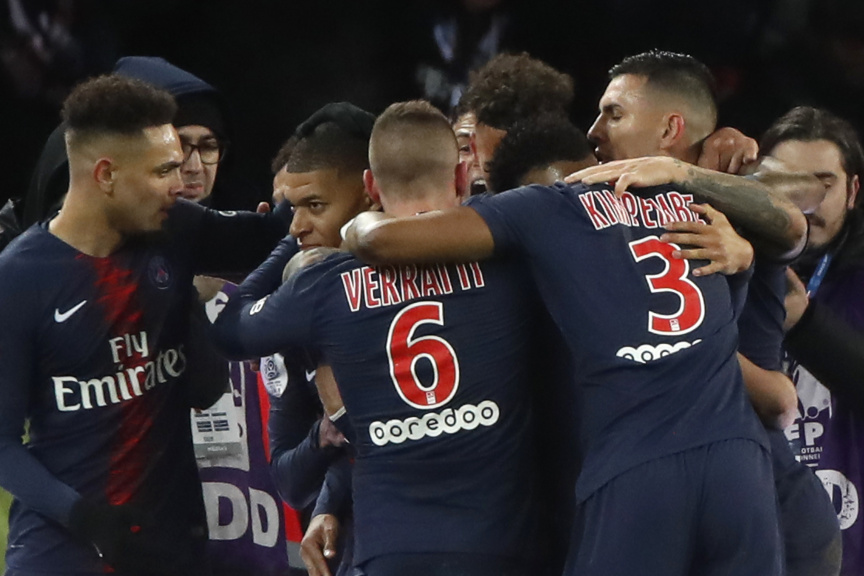 NYON, Switzerland (AP) — Paris Saint-Germain won an initial legal battle with UEFA on Tuesday over the monitoring of its spending on player transfers and wages, and sponsorship deals linked to the club's Qatari owner.

The Court of Arbitration for Sport upheld PSG's appeal against an attempt by UEFA investigators to reopen a previously closed investigation.

The judgment in favor of PSG is separate from another UEFA investigation of its finances in the 2017-18 season when the French champions, backed by Qatari sovereign wealth, signed Neymar and Kylian Mbappe.

The most severe punishment in that ongoing probe could see UEFA ban PSG from the Champions League. World soccer's most coveted club competition is key to building the club's global appeal and paid the French club 62 million euros ($70 million) last season in prize money alone.

The court said UEFA's panel of independent investigators and judges missed the deadline to challenge their own previous decision.

"The challenged decision was untimely and must be annulled," CAS said in a statement, announcing the ruling while PSG president Nasser Al-Khelaifi attended talks at UEFA headquarters about future changes to the Champions League.

Al Khelaifi, who is also a member of UEFA's executive committee representing European clubs, declined to comment to The Associated Press.

"The CAS decision does not put in doubt the objectives of the UEFA Club Licensing and Financial Fair Play system," UEFA said, repeating its statement issued in the Galatasaray case.

UEFA said its lawyers will analyze the CAS judgment and make "any clarifications or amendments to its rules" required.

PSG has long been a major target of UEFA's FFP project since the launch in 2011. It requires clubs to approach break-even business on soccer, such as on player transfers and wages, and also assesses the fair market value of sponsorship deals.

"The club emphasizes it has always respected the rules and always striven to reply calmly and transparently to repeated requests from UEFA and its club finance panel," PSG said in a statement Tuesday.

Critics say FFP protects storied clubs from being challenged by ambitious rivals with wealthy owners, though UEFA insists it aims to control club debts and over-inflation of the soccer market.

Since being bought by its Qatari owners in 2011, PSG has been suspected of using overvalued sponsor deals from the gas-rich emirate to balance its accounts and comply with UEFA rules.

The club forfeited 20 million euros ($22.8 million) of Champions League prize money in a 2014 settlement that avoided a more high-stakes legal fight. Manchester City, which is owned by Abu Dhabi's ruling family, got the same deal from UEFA.

In April 2017, UEFA released PSG and Man City from their settlement agreements for complying with three years of stricter monitoring.

PSG then spent heavily in that offseason, breaking soccer's transfer record to buy Neymar from Barcelona for 222 million euros (about $250 million). A loan deal was agreed with Monaco for Mbappe that became a 180 million euro ($205 million) purchase last year.

UEFA opened an investigation soon after the loan for Mbappe was completed in August 2017.