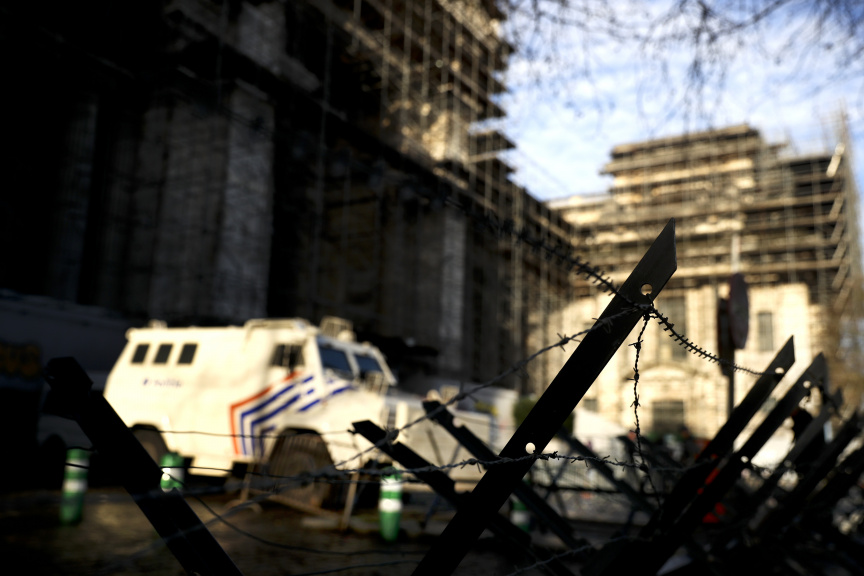 An armoured police vehicle and barbed wire fence block the way outside the Justice Palace during the trial of Mehdi Nemmouche in Brussels, Thursday, March 7, 2019. (AP Photo/Francisco Seco)

BRUSSELS (AP) — A French citizen suspected of working for the Islamic State group in Syria was convicted Thursday of murdering four people at a Jewish museum in Belgium's capital, an attack that crystalized fears in Europe that foreign fighters would return to sow terror at home.

Reading out the jury verdict at the Brussels criminal court, presiding Judge Laurence Massart, said, "Mehdi Nemmouche is guilty of committing four terrorist murders," in the slayings of an Israeli couple and two museum employees on May 24, 2014.

Nemmouche, 33, sat impassively in court while the verdict was read, three police officers wearing ski masks surrounding him. He faces up to 30 years in prison at a sentencing hearing set for Monday.

An alleged accomplice, Nacer Bendrer, was found "guilty beyond all reasonable doubt" of supplying the revolver and assault rifle used in the killings. Bendrer, 30, sat with his head bowed during the reading of the verdicts.

Defense lawyers had argued the killings were part of a conspiracy and Nemmouche was set up by security officials — perhaps from Iran or Lebanon — who shot the couple because the Israelis might have been members of Mossad, Israel's intelligence service.

Security camera video from the Jewish museum's entrance showed a man wearing a baseball cap and armed with a revolver shoot the man and woman in the back of the heads at point-blank range.

He then walked down a corridor and fired into offices at the two other victims, before pulling out an assault rifle to spray the area. It was over in 82 seconds and the killer strode away without looking back.

Nemmouche, who prosecutors claim fought alongside Islamic State extremists in Syria, was captured in France almost a week later in possession of the weapons used in the killing.

French authorities also allege he was one of the jihadists who kept four French journalists hostage until they were freed in April 2014 in Syria. Nemmouche still must face charges in France linked to the hostage-taking.

U.S. President Donald Trump has demanded that European countries take back their citizens who went to the Middle East to fight in Syria, but many countries have voiced concern over how to bring home-grown IS extremists to trial.

The question of what to do with such foreign fighters has been a conundrum for the Europeans for several years. IS prisoners could be tortured or executed if they remain in jail in Syria or Iraq, and the EU opposes the death penalty.

But few European countries have embassies in Syria or Iraq, let alone extradition treaties. Proving who is who and gathering solid evidence against suspects that would stand up in European courts is virtually impossible.

Then there is the question of what to do with the wives and children of European jihadis. The case of a British teenager who ran away to join IS, gave birth to a baby boy and tried to return to the U.K. ignited debate in Britain this month about how to deal with citizens trying to leave Syria as the extremist group collapsed.

Security experts have warned that dozens of convicted terrorists will walk free from European prisons over the next two years, many of them jihadis who trained or fought in Syria and Iraq but never faced serious charges due to insufficient evidence.