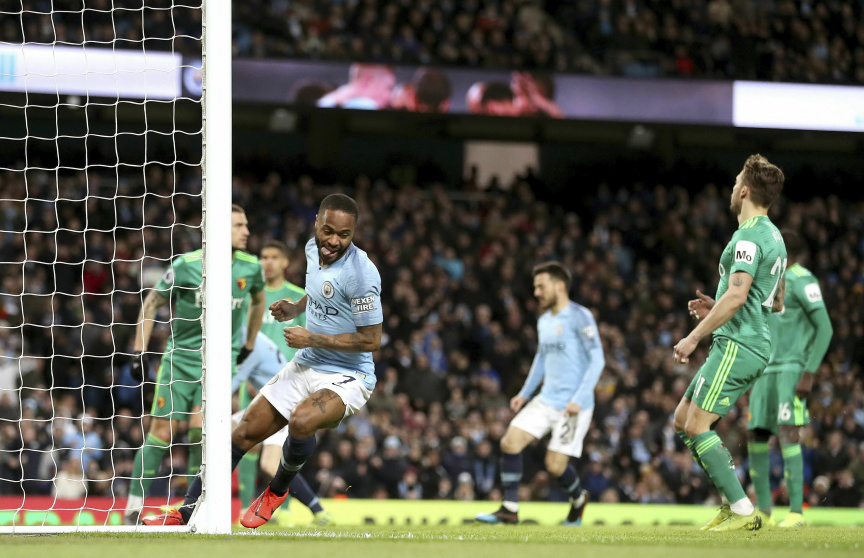 Tottenham's second-half collapse put Spurs in danger of not even finishing in the top four.

Man City upped the pressure on second-placed Liverpool by beating Watford 3-1 thanks to Sterling's goal spurt after the break. After the England winger benefited from a disputed offside decision to open the scoring, he completed his hat trick in just 13 more minutes at Etihad Stadium. That means Liverpool has to beat Burnley at home on Sunday to cut City's lead back to just one point, with another eight games remaining.

"The first half was difficult even for myself, it was hard to break them down," Sterling said. "But in the second half things opened up and we got the luck in the first goal and then took our chances really well."

Tottenham was just two points behind City and still in the title race at the start of February, but finds itself in a tight scrap just to hold on to a Champions League spot after falling to a third loss in four games. Spurs were stunned at relegation-threatened Southampton 2-1 after wasting a first-half lead, meaning its grip on a top-four place is suddenly extremely fragile.

Tottenham is just three points ahead of fourth-placed Manchester United ahead of its game at Arsenal on Sunday, with the Gunners just a further point back. Sixth-placed Chelsea, meanwhile, is five points behind Spurs with two games in hand.

Southampton's win meant the fight to avoid the last relegation spot also tightened. The gap between 13th place and 18th is just six points after Cardiff, Newcastle and Brighton also earned crucial victories, while Fulham and Huddersfield both look doomed after losing again.

Last-placed Huddersfield lost at home to Bournemouth 2-0 and was 16 points from safety, while Fulham remained just three points ahead in 19th after losing at Leicester 3-1.

Sterling's opening goal was hotly disputed as he was initially flagged offside, but referee Paul Tierney overruled the decision after a three-minute discussion with his linesman. Sterling was in a clear offside position when Sergio Aguero played him through on goal but Tierney apparently ruled the goal should stand because defender Daryl Janmaat then tried to clear the ball, which deflected off Sterling and into the net.

"I don't know exactly what it was, but I was praying and hoping that they gave it to us, and we were slightly fortunate," Sterling said.

There was nothing fortunate about the other two, though. The second goal was a simple tap-in from a yard out after City carved apart Watford's defense, with David Silva and Riyad Mahrez combining to tee up Sterling. The third was more impressive as Sterling collected a pass from Silva and went past two defenders before slotting the ball home.

Sterling was taken off shortly afterward, and Watford substitute Gerard Deulofeu pulled a goal back for the visitors just 17 seconds after going on, scoring with his first touch after Troy Deeney flicked a long ball into the box.

Harry Kane put Tottenham ahead with his 200th career goal for club and country as Spurs dominated the first half, but Southampton turned it around after the break through quickfire goals from Yan Valery and James Ward-Prowse.

It left Tottenham manager Mauricio Pochettino accusing his players of being arrogant and complacent.

"We showed a lack of aggressiveness, lack of the hunger that you need to kill the games and win," Pochettino said. "I am so, so, so disappointed. I am a little bit worried about this change from the first half to the second half — it's only one thing, it's mental. It's about complacency, it's about arrogance in a bad way."

Cardiff's hopes of staying up were boosted by a 2-0 win over West Ham, with Junior Hoilett and Victor Camarasa scoring in either half to end a run of three successive defeats. That put Cardiff just two points behind Burnley, which plays at Liverpool on Sunday, while the gap to Southampton also remained at two points.

Huddersfield and Fulham can probably begin planning for life back in the Championship next season.

Huddersfield fell to a 15th loss in its last 17 league games after Callum Wilson scored on his return from a knee injury for Bournemouth, which ended a nine-game losing streak in Premier League away matches. Ryan Fraser doubled the lead in the 67th.

Fulham also inched closer to the drop after Jamie Vardy reached 100 goals for Leicester by scoring twice in the second half.

Vardy made it 2-1 in the 78th minute to reach the century mark across all competitions and then netted his 101st goal eight minutes later to seal the win in new manager Brendan Rodgers' first home game in charge.

Solskjaer's unbeaten record at Man U ended by Arsenal