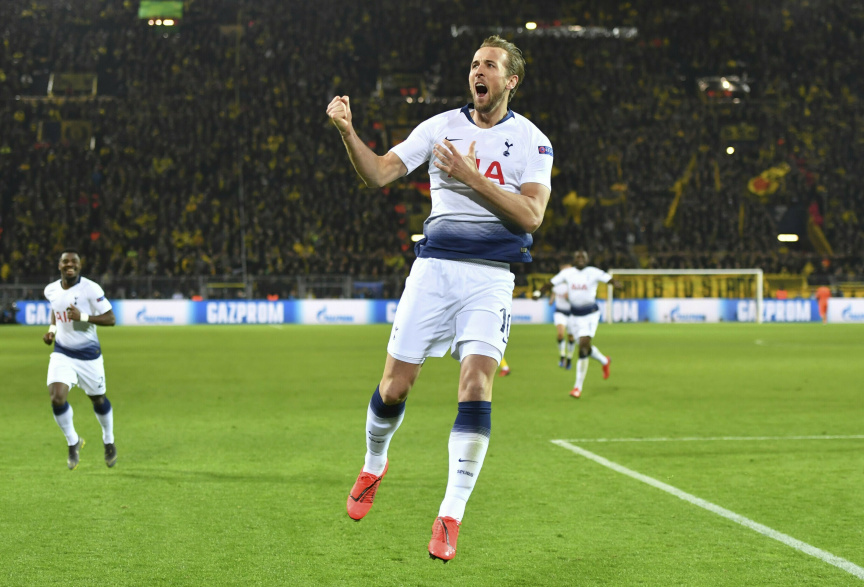 Tottenham forward Harry Kane celebrates after scoring the opening goal during the Champions League round of 16, 2nd leg, soccer match between Borussia Dortmund and Tottenham Hotspur at the BVB stadium in Dortmund, Germany, Tuesday, March 5, 2019. (Bernd Thissen/dpa via AP)

DORTMUND, Germany (AP) — Hugo Lloris and Harry Kane made sure there was no comeback for Borussia Dortmund as Tottenham reached the Champions League quarterfinals with a 1-0 win on Tuesday.

Kane's 49th-minute strike after Lloris had made a series of outstanding saves ensured the visitors completed a 4-0 win on aggregate after securing a comfortable lead in the first leg of their last-16 meeting.

Moussa Sissoko played the ball into Kane's path and the England striker, who missed the first leg with an ankle injury, picked his spot before dispatching an unstoppable effort past Roman Buerki in the Dortmund goal.

"Lloris was great. The mentality was good," Tottenham coach Mauricio Pochettino said. "We conceded more chances than we expected, but that is football. When you beat them 3-0 in the first leg, it's always difficult. There was nothing to lose for Borussia Dortmund, and they were taking a lot of risks."

In Tuesday's other game, Ajax knocked three-time defending champion Real Madrid out with a 4-1 away victory, progressing 5-3 on aggregate.

With Dortmund needing to overturn a three-goal deficit, the hosts duly dominated the game in terms of possession and chances, offering the visitors no respite.

Jan Vertonghen made a crucial interception to deny Marco Reus and Paco Alcacer went close before Lloris made a brilliant reflex save to thwart Reus' deflected shot.

Son Heung-min, who sparked Tottenham's win in the first leg, had the visitors' first big chance after half an hour played, but spurned the opportunity with Marius Wolf tracking back to put him off.

Dortmund responded with even more pressure. Julian Weigl, Reus, and Mario Goetze all went agonizingly close — the latter denied by a fingertip save from the outstanding Lloris.

It was the home side's ninth attempt on goal. By the time the first half ended, Dortmund was up to 11 — and still scoreless.

Reus flashed an effort across the face of goal as Dortmund started the second half in the same vein, but then Kane ended any remaining suspense.

It was the first goal Dortmund conceded at home in the competition this season.

United States international Christian Pulisic came on in the 62nd minute, his first appearance since injuring a thigh in the first leg on Feb. 13.

Dortmund, which has only one win from its last eight competitive games, has only the Bundesliga remaining. It still leads on goal difference from Bayern Munich, but only just after squandering what was once a nine-point lead.

"This should give us confidence for the championship," Zorc said of his side's remaining title ambitions.