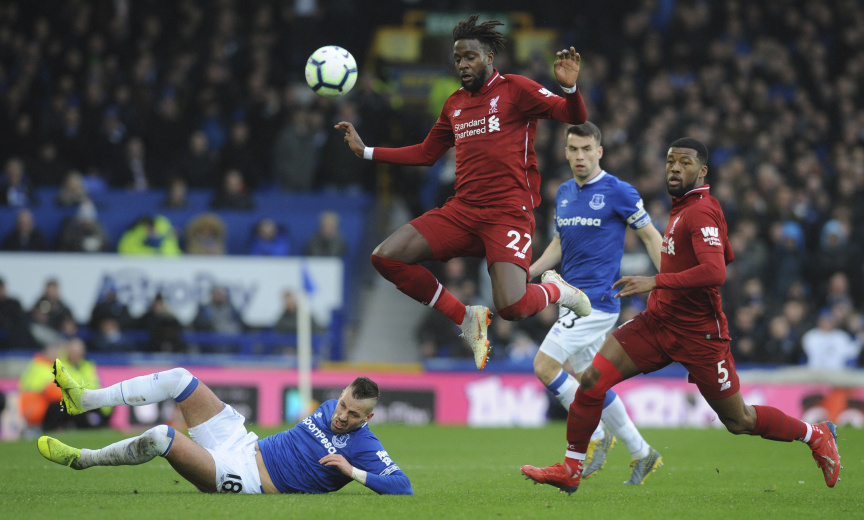 Two months after blowing the chance to go 10 points clear, Liverpool isn't even top of the Premier League any more.

With nine matches to go, it is advantage Manchester City. Retaining the title is in the hands of the champions.

City is a point ahead of Liverpool thanks to its 1-0 win at Bournemouth on Saturday and Juergen Klopp's side being held 0-0 by Everton on Sunday.

The stalemate wasn't a blip in Liverpool's quest to end a 29-year top-flight title drought, but the latest in a worrying trend for Klopp. His side has drawn four of its last six league matches to hand the initiative to Pep Guardiola's City.

Blame the weather, not the players, according to Klopp.

"(A) very, very difficult game for different reasons," Klopp told broadcaster Sky Sports. "A wild opponent and — I know people don't like it when I say this — the wind came from all different directions, you saw that in a lot of situations.

"It didn't help any football play, especially when the ball was in the air, which it was a lot. In a game that was difficult to control because of those things, we had I think three or four really big chances."

It's not only the title race that has been transformed in recent weeks. The race for third and fourth place is now looking more open.

Tottenham's grip on third spot has been weakened, with Manchester United three points behind.

And while Chelsea remains sixth, a 2-1 victory at relegation-threatened Fulham put Maurizio Sarri's team one point behind Arsenal and within two of United, with a game in hand.

"We were trying to involve Tottenham in the fight (for fourth) and I think that now they are involved. So, better two teams for four places than three for one place," Sarri said.

Kepa Arrizabalaga was back in Chelsea's goal after being dropped for Wednesday's 2-0 victory over Tottenham for refusing to be substituted in the League Cup final.

"The reaction today was really very good," Sarri said. "He paid with the club, with the team. Now the situation is closed."

Jorginho's winner in the 31st minute — the midfielder's first from open play since joining from Napoli last year— came within four minutes of Calum Chambers equalizing.

Fulham is now 10 points adrift of safety with nine games to go.

Five years after coming close to winning the title with Liverpool, Brendan Rodgers is back in the Premier League on a very different mid-table mission with Leicester.

And it was a miserable start for Rodgers after abandoning the bid for a third straight Scottish title with Celtic, losing 2-1 at Watford.

Leicester conceded after five minutes when Troy Deeney converted Gerard Deulofeu's free kick. Jamie Vardy leveled in the 75th but Andre Gray struck in the second minute of stoppage time to deliver a fourth win from five for eighth-placed Watford.