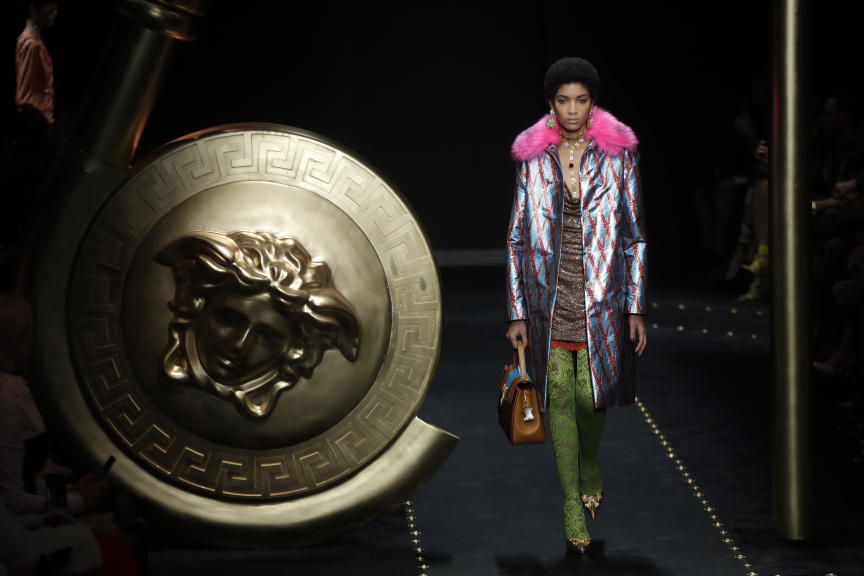 MILAN (AP) — Anna Wintour paid tribute Friday to Karl Lagerfeld's generosity and sense of humor as she presented a new fashion exhibition. Elsewhere in Milan, Versace unveiled its first womenswear collection since the Italian fashion house become part of a U.S. fashion group, and luxury brand Bottega Veneta's new creative director showcased a collection that draws on the house's heritage but pushed it toward a forward-dressing consumer.

The American Vogue editor-in-chief said that Lagerfeld, who died this week, "would have loved" the Costume Institute's upcoming exhibit "Camp: Notes on Fashion" at the Metropolitan Museum of Art, given his "wonderful sense of humor."

"Karl was the very best benefactor and collaborator, as erudite as he was generous," Wintour said.

Highlights from the third day of Milan Fashion Week previewing designs for the upcoming fall and winter:

Donatella Versace mixed luxury and grunge in a new collection that calls on the Italian fashion house's key iconographic details of past decades. It was the Milan fashion house's first womenswear show since becoming part of the Capri Holdings Limited owned by Michael Kors.

Versace said before the show that "grunge is an attitude, that time in life when people were more deep in the sense of thoughts, talking and thinking." She said there is need for more of that now.

Grunge came through in the purposely ravaged cashmere sweaters, held together by Versace hardware, including the Greek-head safety pin, like one that came with the invitation. The sweater paired perfectly with a tweed skirt with a colorful silk and lace slip peeking out.

Other looks were more eclectic, as if pulled from some 1970s magic trunk of slinky, colorful pieces that layered into fun, upbeat looks including a shimmery turquoise slip dress, to the lace tights and V-branded pink-and-green coat with an acid green fur collar. Versace also played with the house's bondage heritage, with bondage tops laying over ribbed turtlenecks for day or forming the bodice of an evening dress.

She closed on a series of black looks modeled by Gigi Hadid, her sister Bella Hadid, with iconic 1990s supermodel Stephanie Seymour closing the show.

"With this collection, I wanted to show that side of a woman that isn't afraid to step outside of her comfort zone because she knows that imperfection is the new perfection," Versace said in her notes.

An oversized weave on a red knitwear tunic emphasized the intreccio's inherent grace. The weave was left open on a leather skirt for a laser-cut effect, while a repeating tab technique created leather coats for him and her with a slight wave effect. Bags included molded leather in fresh geometric shapes.

In the combined men's and women's collections, Lee put a lot of emphasis on the female neckline, which scooped, dipped and performed other more complicated geometric tricks. A leather tuxedo shirt with a plunging neckline was paired with an ice-green quilted skirt with a puffer coat aesthetic.

For men, knitwear looks were overlapped with large open panels and modernized necklines. A man's coat had wide shoulders, and was kept short for an overall square silhouette, and worn over an all-leather biker ensemble.

Overall, the collection projected a hardness with ample leather and hardware, but the designer's softer side came through in knitwear and pieces like a mirrored coat for women that moved like silk.

Marni creative director Francesco Rizzo says his woman for next season is a vigilante pursuing her prey in an escape room that has no limits.

She is dressed for extremes as day turns to night, a little bit goth, a little bit huntress. The collection is an unusual yet sexy mix of satin, wool and leather. Each piece is an iteration of uniform that evolves. Panels of color reveal pleats, dresses twist and fold, pleated panels become trailing scarves on shirts, satin runs into plaid wool, edges are left unfinished. It is one big game of trompe l'oeil. A print looks like squares up close, only to reveal a woman's face or a bouquet of flowers at a distance, like a pixelated Mondrian.

Rizzo said the collection was also meant as a battle cry against censorship.

"It is very easy to censor at this moment," the designer said backstage. "We need to remember revolutionary moments when (Yves) Saint Laurent, (Helmut) Newton created revolutions with the freedom of body. Today Marni for me is about cerebral eroticism."

The inclusion of many pieces from recent runway collections in the upcoming Costume Institute exhibit focusing on "camp" is an indication of its relevance in the fashion world, the curator said.

Curator Andrew Bolton says camp has been used "as an escape but also a tool for political criticism."

"I think camp has this ... playful sort of approach to the Zeitgeist. ... It's a reaction and a reflection of the times we are living," he said.

The exhibit, sponsored by Gucci, will include pieces from creative director Alessandro Michele's fall and winter 2018-2019 collections, as well as recent looks from Viktor & Rolf and Palomo Spain. It runs from May 9 to Sept. 8 at the Metropolitan Museum of Art in New York.

"The exhibition in some ways belongs to the DNA of what I have done in these years," Michele said. "Camp isn't only a word created to explain how much you can be extravagant, exaggerated. It is that thing that hides the great power of clothes and the great power of appearance."

The show will also include a Lagerfeld creation — a 1987 Chanel look inspired by Versailles — among 120 that he donated to the Met's Costume Institute.

Presenting the exhibition in Milan, Wintour expressed her gratitude for Lagerfeld, whom she described as a "great friend and an important donor," her voice cracking as she spoke.

Celebs try to out-camp each other at wild Met Gala