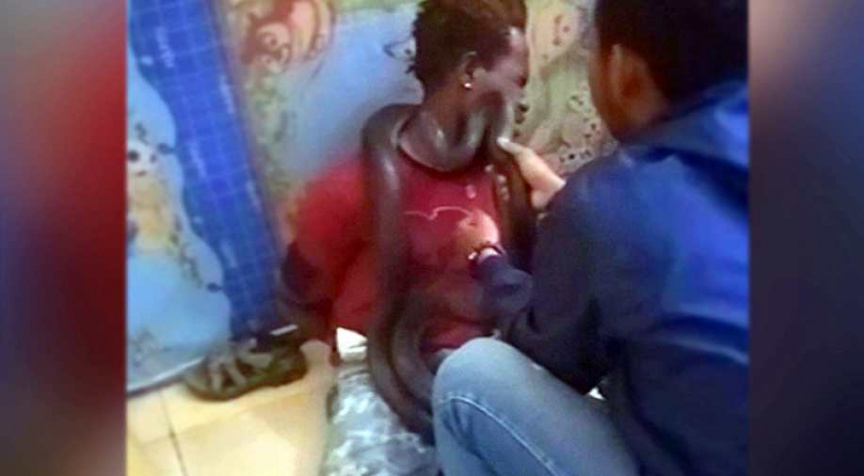 Screen grab from video of Indonesian police using snake during an interrogation.

JAKARTA, Indonesia (AP) — Indonesian police have acknowledged officers terrorized a Papuan man with a live snake after a video of the incident circulated online showing the man screaming in fear and his interrogator laughing.

Police in Indonesia's easternmost Papua region apologized but also attempted to justify the officers' actions by saying the snake was not venomous and that they hadn't resorted to beating the man, who was suspected of theft.

Human rights lawyer Veronica Koman said Sunday that the interrogation methods were torture and violated police policies as well as several laws. She said it was only the latest of several reports of police and military using snakes to terrorize Papuan detainees and symptomatic of a culture of racism against indigenous Papuans.

Sam Lokon, a member of the West Papua National Committee, which advocates for independence from Indonesia, was put in a cell with a snake and also beaten after being arrested in January, Koman said.

Police indicated the incident with the alleged thief happened recently, during a crackdown on petty crime in Jayawijaya district.

The spread of the video had forced police into a "very rare" apology, Koman said, while also criticizing the attempt to provide a justification.

The one minute and 20 second video shows the dark brown snake, at least two meters long, wrapped around the handcuffed suspect's neck and waist and an officer pushing its head into the man's face as he becomes increasingly hysterical.

Officers appear to be asking how many times he'd stolen cellphones.

Jayawijaya police chief Tonny Ananda Swadaya said in a statement the officers had been disciplined by being given ethics training and moved to other locations.

Papua province's police spokesman said the officers involved are being questioned by an internal affairs division of the national police.

"We apologize for the incident," Kamal told The Associated Press. "Institutionally we do not recognize such an unprofessional method of interrogation, and we guarantee that such an inhuman method will not happen again in the future."

The events are likely to further inflame tensions in the region where an insurgency has simmered since the early 1960s when Indonesia took control of the western half of the island of New Guinea, formerly a Dutch colony.

Police and military have carried out a sweeping crackdown on independence supporters after rebel fighters in December killed 19 people working on a construction site for the trans-Papua highway.

A Polish man who is being held in a Jayawijaya prison while on trial for treason said earlier this week he'd been assaulted by police officers visiting the prison as guards looked on.

20 killed, 70 hurt in protests in Indonesia

Indonesia to move capital from Jakarta to Borneo