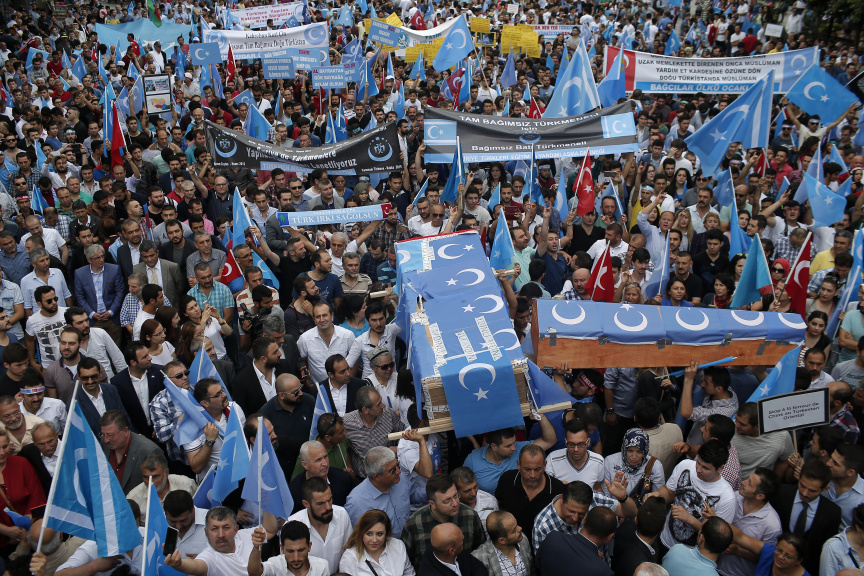 In this Saturday, July 4, 2015 file photo, Uighurs living in Turkey and their supporters, some carrying coffins representing Uighurs who died in China's far-western Xinjiang Uighur region, chant slogans as they stage a protest in Istanbul, against what they call as oppression by Chinese government to Muslim Uighurs in the province. (AP Photo/Emrah Gurel, File)

ISTANBUL (AP) — Turkey's foreign ministry has called China's treatment of its minority Uighurs "a great cause of shame for humanity."

In a statement Saturday, Foreign Ministry spokesman Hami Aksoy said it's "no longer a secret" that China has arbitrarily detained more than a million Uighurs in "concentration camps." He said the Turkic Muslim population faced pressure and "systematic assimilation" in western China.

Aksoy said Turkey has shared with China its position on "all levels" and urged authorities to close the detention facilities and respect human rights.

Turkish President Recep Tayyip Erdogan had once accused China of "genocide" but has since established closer diplomatic and economic relations with Beijing.

China has intensified a security crackdown on Uighurs that was put in place after a bloody 2009 riot. Droves of Uighurs have fled, many traveling to Turkey.