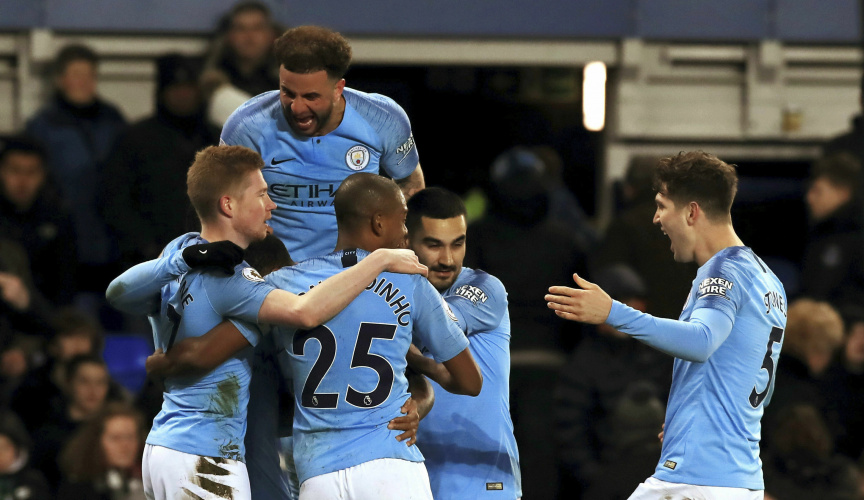 Aymeric Laporte and Gabriel Jesus scored for City during injury time in either half as the hosts went above Liverpool on goal difference — although Juergen Klopp's team has a game in hand. City's game at Everton, the only Premier League game played Wednesday, was rescheduled because of the English League Cup final on Feb. 24, when Pep Guardiola's team faces Chelsea at Wembley.

City trailed Liverpool by seven points at the start of the year but beat Klopp's side on Jan. 3 and is now level with the Reds on 62 points, five points ahead of third-place Tottenham.

"The reality is we could have been, one month ago, 10 points behind when we played Liverpool," Guardiola said. "A few days ago we could have been seven points behind. Now we are top of the league. That is the best advice. The lesson is never give up. That is a lesson for all athletes. Try to win the games, because life can change immediately."

The visitors struggled to create chances at Goodison Park but Laporte exploited Everton's weakness on set pieces by heading in the opening goal on the stroke of halftime, with City's first shot on target. It was the 12th Premier League goal — and 17th in all competitions — conceded from a set piece by Everton, the worst record in the top flight.

Under-pressure manager Marco Silva opted for a defensive-minded lineup by leaving out leading scorers Richarlison and Gylfi Sigurdsson — who have scored 19 of Everton's 36 league goals this season —which made the team difficult for City to break down in the first half. However, Ilkay Gundogan also had a shot deflected onto the crossbar and also had claims for a penalty waved away after a challenge by Andre Gomes.

Sergio Aguero's 58th-minute overhead kick could have sealed the win but it flashed wide. Everton brought on Sigurdsson and Richarlison in search for an equalizer but instead it was Jesus who doubled the advantage with a header with virtually the last touch of the game.

"It's a big frustration to concede after 47 minutes in first half, after 97 minutes in the second half," Silva said. "I don't want to talk more about set pieces. What I tell, I will tell to the players. I understand why you ask, but there is something inside the mind of our players. We have to work more."

City next hosts Chelsea on Sunday knowing that another win is probably necessary to stay ahead of Liverpool, which hosts Bournemouth on Saturday.

"Chelsea are an exceptional team who have had seven days to prepare. We have to prepare well. It really is a final for us this weekend. If we are able to take these points, it is a huge step forward," Guardiola said.

In the only other game in England on Wednesday, Glenny Murray scored twice in extra time to send Brighton into the fifth round of the FA Cup with a 3-1 win over West Bromwich Albion.