Barca optimistic about Messi, Madrid all fit for Copa semi 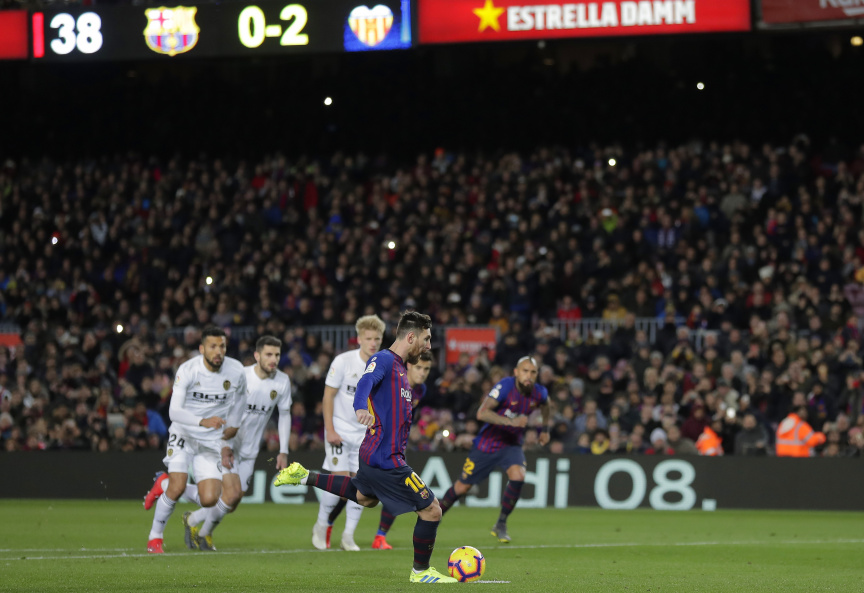 MADRID (AP) — While Lionel Messi gave Barcelona reason to feel optimistic about his ability to play in Wednesday's Copa del Rey semifinal, Real Madrid's main concern is who to leave out for the "Clasico" game.

Messi returned to training on Tuesday and was included in the squad for the first-leg match at Camp Nou Stadium, although it was still unclear whether he had fully recovered from a right leg injury.

"The most important thing is for the player to tell you that he is ready," coach Ernesto Valverde said. "Regardless of what the tests show and what the doctors say, if the player doesn't feel he is ready, you can't let him play."

Messi showed no signs he was bothered by the injury during the opening few minutes of the training session, which were open to media, as players warmed up and played keep-away.

However, Valverde said he will not take any risks with Messi or any other player.

"If it was the last match tomorrow, than it would be different," he said.

Barcelona has kept quiet about the full extent of Messi's injury since he was hurt in a Spanish league match on Saturday.

"It's always good to have the best players playing in every match," he said. "Whether he plays or not, it's not going to influence how we prepare for the game."

Madrid arrives for the match at Camp Nou enjoying its best period of the season and with nearly all of its players available. Solari has all of his best forwards, including an in-form Karim Benzema, the quickly maturing Vinicius Junior, and a fully fit Gareth Bale.

"It's harder when you have all the players available, because it means you have to leave someone out," Solari said. "It's one of the hardest parts of the job for a coach."

Bale is one of the many Madrid players who have recovered from injury in recent days, along with other forwards Mariano Diaz and Marco Asensio. Bale returned as a starter on Sunday alongside Benzema and Vinicius Junior as Alaves was beaten 3-0 in the Spanish league, the team's fifth consecutive win in all competitions.

Solari may not start Bale with Vinicius Junior on Wednesday as they usually play on the same part of the field and their presence could make the squad too unbalanced and more vulnerable defensively.

There is little doubt Benzema will start, as he has six goals in the last four matches. The French striker has 18 goals, six more than he had in all of last season.

It would also be hard to leave out Vinicius Junior, who has taken full advantage of Bale's absences to become a regular starter and a popular player with Madrid fans. The 18-year-old Brazilian has added flair to the attack.

Messi was hurt when Barcelona drew with Valencia 2-2 at home, a result that halted the team's eight-game winning streak in the Spanish league. The club has yet to release a full medical report on the injury, and he didn't practice with his teammates on Monday.

Messi has scored in nine straight games in all competitions, and is the league leading scorer with 21 in 22 matches.

He missed Barcelona's 5-1 league rout of Madrid in October because of a broken right arm. He was rested two weeks ago when Barcelona lost at Sevilla 2-0 in the Copa del Rey quarterfinals.

Valverde said his team won't change the way it plays if Messi is absent, and that his participation shouldn't be seen as a key factor.

"I don't think it (Messi playing or not) changes which team will be considered the favorite," he said. "I don't think there is a favorite in a semifinal between Barcelona and Real Madrid."

Ousmane Dembele, who had trained separately on Monday, also re-joined his teammates in Tuesday's practice, but he was not included in the squad list for Wednesday's game.

The first leg of the semifinal in the Copa del Rey is the first of three matches between the rivals in less than a month.