The Latest: How long will anthem be? How many Trump tweets? 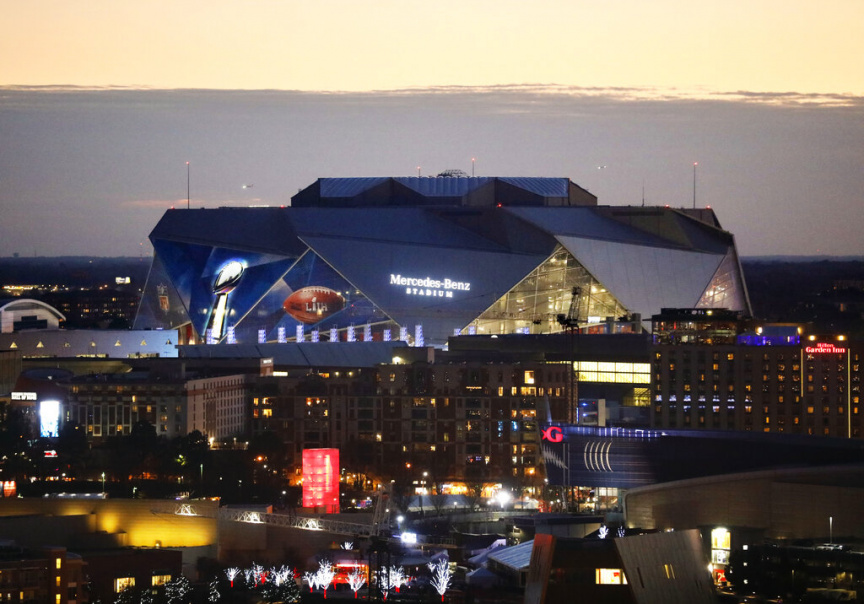 ATLANTA (AP) — The Latest on the Super Bowl (all times EST):

Is Gladys Knight going to hit some long notes today? If so, there could be money to be made.

The over-under for Knight's rendition of the national anthem is set at 110 seconds by Bovada — one of many side-action wagers available for today's Super Bowl, the most heavily bet event of the year.

The color of the first bag of Doritos featured during a Super Bowl commercial? The favorite is red at 3-2.

If you believe President Trump's tweet count will be higher than the number of Tom Brady touchdown passes, then you can wager $140 to win $100.

Los Angeles Rams owner Stan Kroenke got off to a losing start to Super Bowl Sunday.

Arsenal, the London soccer team owned by Kroenke since 2011, lost 3-1 at Manchester City in the Premier League.

The defeat could prove costly for Kroenke, with Arsenal down to sixth in the standings and three points adrift of the four spots to qualify for the lucrative Champions League European competition.

Arsenal has 13 games of the 38-match Premier League season remaining. Kroenke has faced criticism from Arsenal fans about the lack of investment in the team.

The NFL has announced plans for Mercedes-Benz Stadium's retractable roof to be open for the pregame show, including a flyover by the Air Force Thunderbirds, and then closed for the game.

NFL spokesman Brian McCarthy says the plan is to have the roof closed for the teams' pregame warmups on the field. The retractable roof then will open for the pregame ceremony.

McCarthy says the plan could be affected by a change in weather.

The Thunderbirds practiced the flyover with the roof open on Saturday night as close as possible to the planned time for Sunday's pregame show.

There was scattered rain in Atlanta on Sunday morning. The forecast called temperatures in the 50s for the start of the game at 6:30 p.m.

The city of Atlanta had to wait 19 years and build a $1.5 billion stadium to get its third Super Bowl.

Falcons President and CEO Rich McKay is confident it won't take nearly that long for the big game to return to the A-T-L for the fourth time.

McKay says the city and team made it clear that Mercedes-Benz Stadium was constructed with the idea of hosting multiple Super Bowls, not just a single title game.

He expects Atlanta to become a regular part of the Super Bowl rotation with cities that are warmer in the winter, such as Miami, New Orleans, Phoenix and perhaps Los Angeles. He points to all the downtown facilities that are within walking distance of each other, including the stadium, numerous hotels, the Georgia World Congress Center, State Farm Arena and Centennial Olympic Park. All played major roles in this week's Super Bowl activities.

Atlanta hosted the college football championship game last year, and the NCAA men's Final Four will be at Mercedes-Benz Stadium in 2020. The city is also expected to have a major role in soccer's 2026 World Cup.

McKay says: "On the big-event scale, we can be as good a host as anybody, because we have the airport and we have the footprint to really deliver. I hope that's what this week shows."

No matter what happens in today's Super Bowl, Patriots coach Bill Belichick will be on top of the record book.

If the Patriots lose, Belichick will also find himself sharing space the top of the 'L' column with his fourth loss. There are some pretty good names there, though: Don Shula, Bud Grant, Marv Levy and Dan Reeves.

The Los Angeles Rams will attempt to cap their remarkable two-year turnaround under coach Sean McVay with their franchise's first Super Bowl championship in 19 years.

The Rams had been through 13 consecutive non-winning seasons and hadn't won a playoff game in 12 years before they hired McVay, who was 30 at the time. The youngest head coach in modern NFL history immediately engineered a seven-game improvement last season.

He followed it up by taking them to the Super Bowl for the first time in 17 years. Now 33, McVay would be the youngest coach ever to win a Super Bowl.

Today's game between the Rams and Patriots marks the eighth rematch in Super Bowl history.

—Cowboys 30, Bills 13 in Super Bowl 38; a rematch of Dallas' crushing of the Bills the previous year.

No evidence parade-crash suspect knew anyone on route

About 80 thieves ransack US department store