FM: Climate change – the biggest threat to peace and security of Maldives 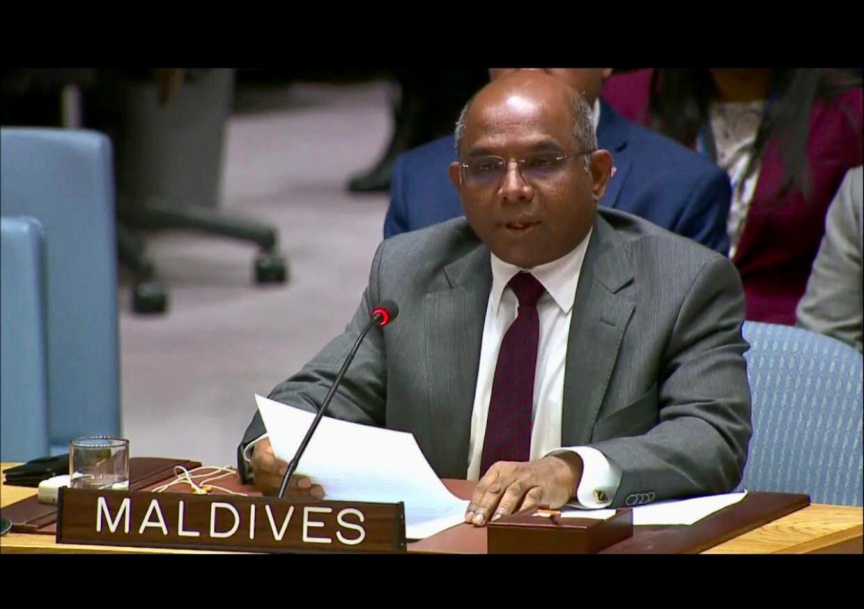 Minister of Foreign Affairs of Maldives, Abdulla Shahid speaks during the UN Security Council meeting on "the impacts of climate-related disasters on international peace and security" on January 25, 2019. (Photo/Twitter/Abdulla Shahid)

Climate change and rise in sea level is the biggest threat to the peace, security and future of Maldives, says Minister of Foreign Affairs of Maldives, Abdulla Shahid.

Shahid made the statement during his speech at the United Nations Security Council meeting on "the impacts of climate-related disasters on international peace and security" last Friday.

He stressed that climate change threatened the very existence of the Indian Ocean island nation.

Addressed @UN Security Council Debate on impacts of climate-related disasters on intl. peace & security. Stressed the need for urgent action to ensure that we deliver to our children a safe, secure and healthy future! Let's not extinguish the sparkle of hope in their eyes! pic.twitter.com/GyHu0YMdDx

Shahid had also been serving as Minister of Foreign Affairs of Maldives when the first UN Security Council meeting on "the impacts of climate-related disasters on international peace and security" was held in 2007 - during former Maldivian President Maumoon Abdul Gayoom’s administration.

Speaking during Friday’s meeting, Shahid highlighted on his statement at the first meeting in 2007.

“On 17th April 2007, when the Security Council held its first ever debate on the impact of climate change on peace and security, I spoke in this very room, on this very same matter. I reminded rhe council on that day that climate change is not only an everyday effect of life for the Maldivians, but an existensial threat. I reminded the council that a mean sea level rise of two meters would suffice to virtually submerge the entire Maldives under water. That would indeed be the death of a nation,” said Shahid.

“And yet today, in this council, 12 years later, I’m still repeating the same message. Prospects for this nation are far worse than we ever imagined.”

“Most importantly, climate change is going to take our homes away from us,” said Shahid.

Shahid noted that climate change was a problem not just for island nations, but for the entire world.

“While we are still busy trying to decide which forum of the United Nations must address which aspect of climate change, in our countries across the world; lakes are drying up depriving fresh water to tens of millions of people. Unseasonal droughts are leaving millions of people homeless. Hunger and displacement are leading to conflicts. And entire nations are sinking under water. What is a bigger security risk than this?” asked Shahid.

He said that Maldives was encouraged by the Paris Agreement and the Katowice Rulebook, but stressed that waiting and hoping was not enough for island nations such as Maldives which are under direct threat from climate change.

He stressed the need for a drastic reversal of the current trends in climate change through acknowledgement of the threat, funds to enable countries to build infrastructure to reduce risk of climate change induced disasters, strengthen the capacity of the UN to identify potential risks of climate change and related conflicts and take early measures to mitigate such issues.

“The countries that are on the first line of impact, such as the Maldives, cannot afford to wait. We cannot wait until we can all agree with the effects on the ground. That climate change is a threat to international peace and security.”