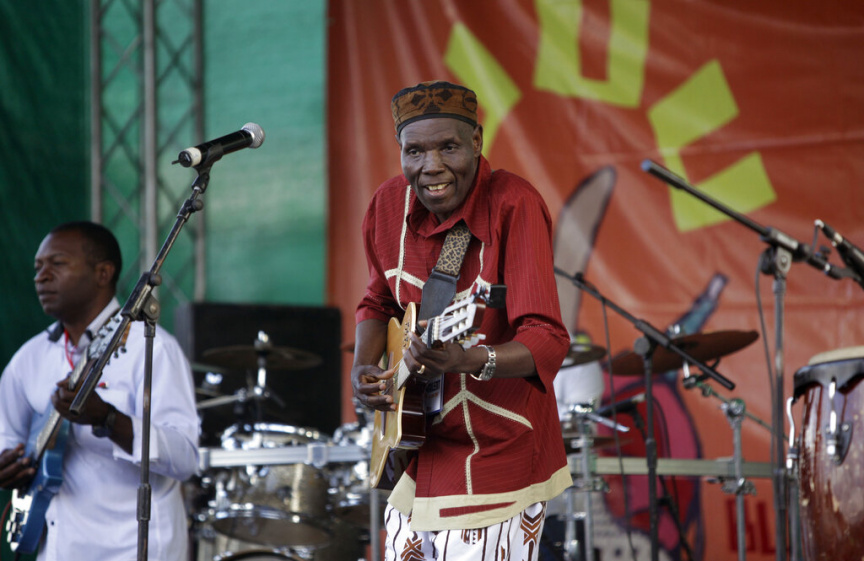 HARARE, Zimbabwe (AP) — One of Zimbabwe and Africa's most iconic musicians, Oliver Mtukudzi, died on Wednesday at age 66 after decades of rollicking, captivating performances won him devoted fans worldwide.

"It is difficult to accept, I have no words," said musician and poet Albert Nyathi, who joined several other mourners at the hospital in the capital, Harare, where the star passed away. "What is left is to celebrate his life."

Zimbabwe's state-run Herald newspaper reported that Mtukudzi had "succumbed to a long battle with diabetes."

With his distinctive husky voice, Mtukudzi had a career that stretched from white minority-ruled Rhodesia to majority-ruled Zimbabwe, producing a string of hits that spread his fame across Africa and eventually to an international audience.

Tuku, as he was widely known, avoided political controversy. The closest he came was with his 2001 song "Bvuma," which in the Shona language means "accept that you are old" and was taken as a message to longtime leader Robert Mugabe to retire.

Paul Mangwana, a senior official with Zimbabwe's ruling ZANU-PF party, praised Mtukudzi for remaining "apolitical," saying he supported calls for the singer to be buried at the national heroes' acre, a shrine that is a preserve of ruling party elites.

In a country where political tensions are high and party loyalties matter, Mtukudzi cut across the divide, singing at ruling party events but also performing at late opposition leader Morgan Tsvangirai's wedding and funeral.

"Today we said goodbye to a true patriot. Oliver Mtukudzi, your voice has given us comfort during difficult times, and will remain with us for posterity," President Emmerson Mnangagwa said.

One of Mtukudzi's biggest hits was "Neria," a mournful song about the tribulations of a woman who was thrown into poverty when her husband died because customary law did not allow her to inherit his property. It was the title song of a movie of the same name.

He sang, played guitar and danced while directing a tight band of guitarists, keyboards, percussionists and dancers. He released more than 60 albums and made several successful international tours, performing in neighboring South Africa late last year.

He also was known for mentoring young Zimbabwean musicians. "He was like a father figure," said MacDonald Chidavaenzi, a songwriter and producer.

Mtukudzi's company in a statement called him a "national icon" as well as "a father, brother, grandfather, uncle, and above all a husband to his loving wife Daisy Mtukudzi."

Mtukudzi wrote songs in a style that were a mix of Zimbabwean and South African rhythms that became known at "Tuku music."

Sundance is homecoming for Julianne Moore and husband