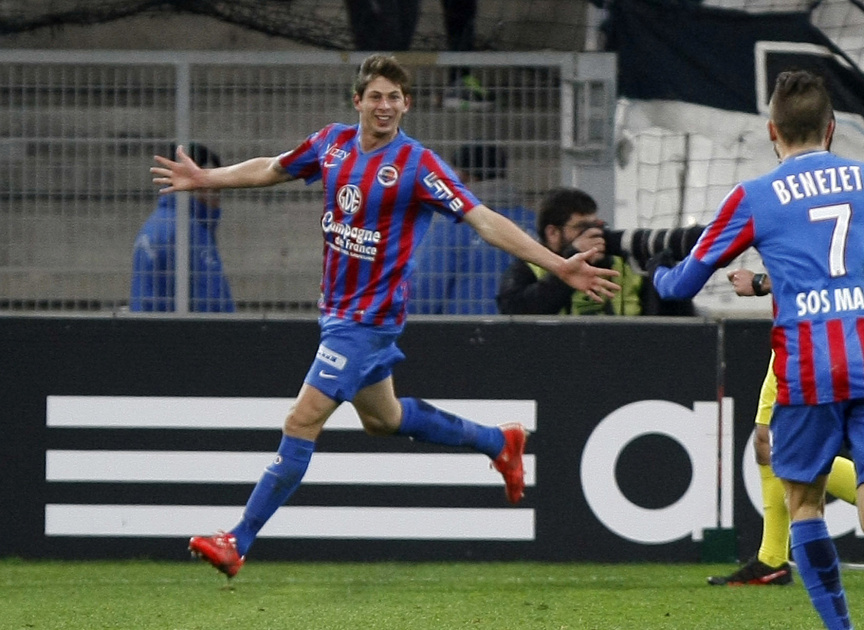 In this Friday, Feb. 27, 2015 file photo, Caen's forward Emiliano Sala celebrates scoring against Marseille during the League One soccer match between Marseille and Caen, at the Velodrome Stadium, in Marseille, southern France. (AP Photo/Claude Paris, File)

PARIS (AP) — The search for the missing plane taking Argentine soccer player Emiliano Sala to his new team in Wales was called off for the night on Tuesday with authorities not expecting to find any survivors in the English Channel.

Police said floating objects had been seen in the water but they were unable to confirm whether they were from the light aircraft that disappeared from radar Monday night off the coast of Guernsey as it made the journey from Nantes.

The 28-year-old Sala had spent the previous hours saying farewell to teammates at the French city's soccer team after Cardiff signed him for a club-record fee last week.

"After all this time, the weather's quite cold, the water is very cold out there ... I am not expecting anyone to be alive," Channel Islands Air Search chief officer John Fitzgerald told The Associated Press. "We just don't know how it disappeared at the end of yesterday. It just completely vanished."

Authorities have found no sign of those on board.

"If they did land on the water," Guernsey Police said, "the chances of survival are at this stage, unfortunately, slim."

Britain's Coastguard received an alert at 8:23 p.m. on Monday from air traffic control in Jersey, the largest of the Channel Islands, after it failed to make contact with the Piper PA-46 plane with two people on board, Guernsey police said. The French civil aviation authority confirmed Sala was one of the people.

Authorities have been searching for 15 hours in total. They suspended the search later Tuesday after the sun set.

In Sala's hometown of Progreso, Argentina, the player's father said he was running out of hope.

"I don't know what to think. ... The hours pass and I am just beginning to think the worst," Horacio Sala told media gathered outside the family home. "We were in touch on Sunday. He was so happy that he was going there, to an even bigger club."

Sala's last post on Instagram was a picture on Monday with Nantes players alongside a message which translates as "the last goodbye."

Cardiff announced it had signed Sala for a reported 15 million pounds ($19 million) through 2022. He was in Cardiff last week to finalize the transfer, which was awaiting international clearance. The Premier League did not respond to questions about whether the transfer had been completed.

"I can't wait to start training, meet my new teammates and get down to work," Sala said in a video posted on the club's website.

A powerful and direct player, Sala equaled his career-best total of 12 goals — achieved in the past two seasons with Nantes — in 19 league games this season. He is fifth highest scorer in the French league, one behind Paris Saint-Germain forward Neymar, who is the world's most expensive player.

"He was a polite, nice and adorable player who was loved by everybody," Nantes president Waldemar Kita told French TV channel CNews.

Nantes was due to play Entente Sannois in the French Cup on Wednesday but the third-tier club said it was postponed until Sunday "following the disappearance of the plane of former player Emiliano Sala."

"We continue to pray for positive news," Choo said.

Sala, who had not played for Argentina's national team, has also played in France for Bordeaux.

In Progreso, Sala's hometown, the president of the soccer club where the forward began his career told The Associated Press that these are "difficult hours" for all the locals.

"There's great sadness and lots of uncertainty," San Martin de Progreso president Daniel Ribero said. "He's an example for all youth. A humble kid. He would always return to Progreso."