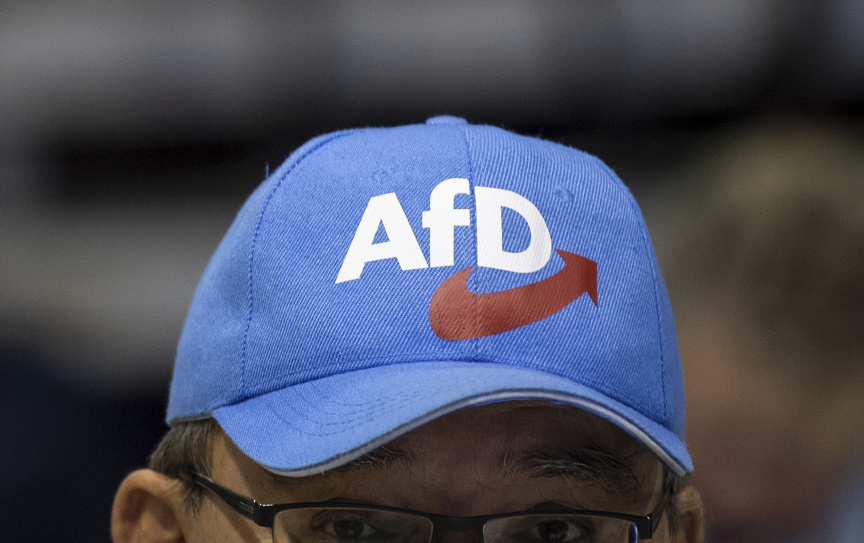 In this Sunday, Jan. 13, 2019 file photo a participant of the European election meeting of the Alternative for Germany party, AfD, wears a cap with the party's logo in the Saxony-Arena in Riesa, Germany. (Monika Skolimowska/dpa via AP, file)

BERLIN (AP) — Germany's domestic intelligence agency said Tuesday it was putting the far-right Alternative for Germany under increased observation amid concerns that it is flirting with extremism. It is the first time in the country's post-war history that a party represented in the national parliament has faced such scrutiny.

The domestic intelligence service BfV plans to examine public comments by Alternative for Germany members and its links to extremist groups, but stopped short of putting the party as a whole under covert surveillance, the agency's head, Thomas Haldenwang, told reporters in Berlin.

The party's youth section and a party faction linked to a prominent leader in eastern Germany, Bjoern Hoecke, will be scrutinized even more closely, including through the possible use of covert methods, Haldenwang said, adding that there was sufficient evidence to indicate they could be classified as "extremist organizations."

He cited the youth organization's stated goal of creating an ethnically pure country and efforts by Hoecke's faction — known as "The Wing" — to downplay Germany's Nazi past. The Wing has also suggested it might pursue "revolutionary" means to achieve its political aims, warranting scrutiny from the BfV, which is tasked with monitoring all extremist organizations in the country.

Alternative for Germany, which is also known by the German acronym AfD, has walked a fine line in recent years by promoting views far outside the country's political mainstream while insisting that it remains committed to law and order.

Its co-leader, Alexander Gauland, criticized the BfV's decision and claimed it was politically motivated, adding the party would take legal action steps against it.

"We maintain this decision of the BfV is wrong," Gauland said.

The BfV, whose name translates as Federal Office for the Protection of the Constitution, spent months collecting material on Alternative for Germany.

After reviewing 1,069 pages of publicly available material, including the party's program, websites and speeches by leading figures, the agency concluded there was enough evidence that elements of the party were working against some constitutional guarantees, including the dignity of all persons, Haldenwang said.

"It's too soon to conclude sufficiently whether these indications are characteristic for the aims and orientation of the entire party," he said.

The decision means authorities can start systematically collecting further material on the party. But it can only keep files on people associated with the youth arm and Hoecke's faction, said Haldenwang. The bar for collecting information on party members who have been elected to state or national parliaments is particularly high, he added.

German security officials, speaking on condition of anonymity, said other prominent party members who could face particular scrutiny include Andreas Kalbitz, a close ally of Gauland and AfD's leader in Brandenburg state, and Hans-Thomas Tillschneider, a regional lawmaker in the neighboring state of Saxony-Anhalt with ties to the extremist Identitarian Movement.

AfD, which is the largest opposition party after placing third in Germany's 2017 national election and is represented in all 16 state assemblies, has moved steadily to the right since it was founded six years ago as a vehicle for critics of the euro currency.

Several senior figures have quit in recent years, warning it was being taken over by far-right extremists.

Following reports about possible observation by the BfV agency last year, the party called on members to refrain from making comments that might be considered extremist.

But Hoecke, the party's leader in Thuringia state, avoided expulsion despite suggesting that Germany should end its tradition of acknowledging and atoning for its Nazi past.

"Sections of the party have direct links to the right-wing extremist scene and are clearly hostile to the constitution," Hoegl said.

"This is a step in the right direction," said its head, Josef Schuster.

Haldenwang didn't say how long his agency would monitor the party, but suggested it could influence future decisions by the way it behaves.

"It's at a crossroads and we will see whether it develops in one way or another," he said.

It's unclear whether the added scrutiny will help or hurt Alternative for Germany, he acknowledged.

In the past, the agency has monitored some members of the Left party — which has roots in East Germany's communist party — and the far-right National Democratic Party, or NPD.

An attempt by authorities to ban the NPD, which had a handful of seats at the regional level, was rejected by Germany's Constitutional Court in 2017. The party has since been sidelined by AfD.