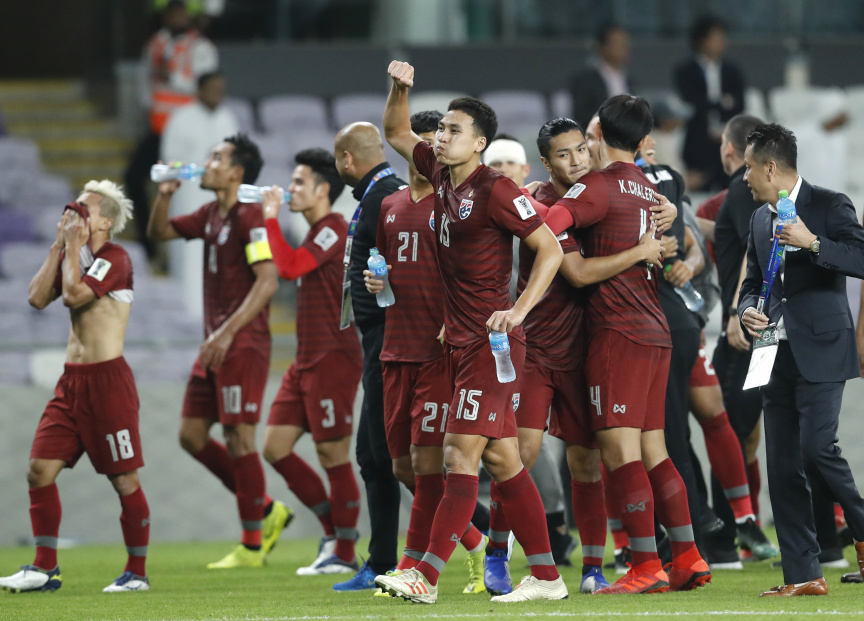 AL AIN, United Arab Emirates (AP) — Thailand's decision to change coaches continued to prove to be a masterstroke but there was last-minute heartbreak for India at the Asian Cup on Monday.

Thailand drew against host side United Arab Emirates 1-1 to qualify for the next round for the first time since reaching the semifinals in 1972.

UAE finished top of Group A and the pair could be joined in the round of 16 by Bahrain, which beat India 1-0 thanks to a last-gasp penalty and will likely progress as one of the best four third-placed teams.

It was a far cry from Thailand's first match in the tournament, a 4-1 loss to India that led to the firing of coach Milovan Rajevac and the appointment of his assistant, Sirisak Yodyardthai, as interim coach.

UAE started strongly and took the lead less than seven minutes in. Ismail Al Hammadi's attempted chip came back off the crossbar but Ali Mabkhout headed home the rebound.

Thailand started to get into the match and leveled four minutes before the break when Thitiphan Puangjan took advantage of panic in the UAE defense to bundle the ball past goalkeeper Khalid Eisa.

The War Elephants finished second, a point below UAE and above Bahrain thanks to a better head-to-head record, having won the match between them 1-0.

Bahrain, which hit the woodwork earlier in the match, was seconds away from going out of the tournament as India managed to fend off wave after wave of attack.

However, India captain Pronay Halder brought down Hamed Alshamsan in the penalty area and Jamal Rashed converted in stoppage time to send Bahrain into unbridled joy.

Kane set for 2 months out with ankle injury