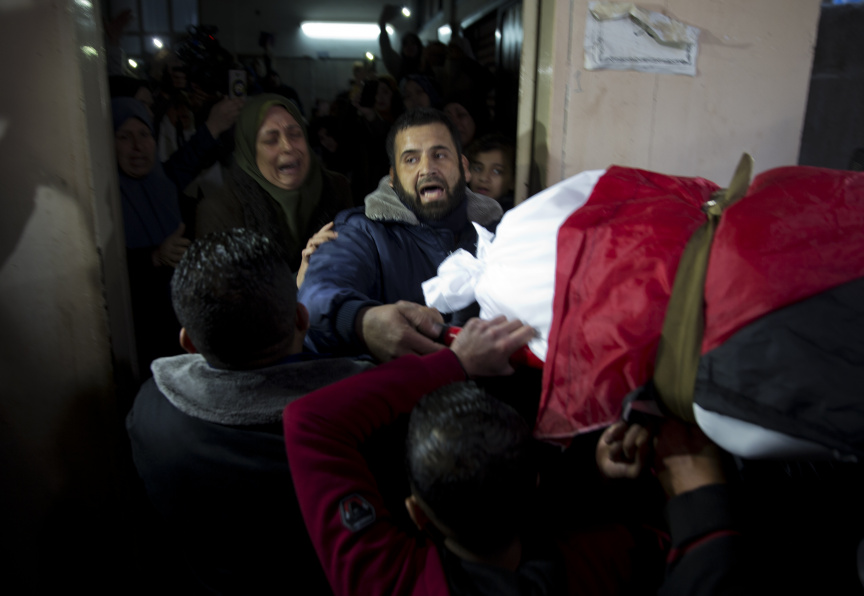 Mourners carry the body of Palestinian woman, Amal al-Taramsi, 43, who was killed by Israeli troops during Friday's protest at the Gaza Strip's border with Israel, into the family home during her funeral in Gaza City, Saturday, Jan. 12, 2019. (AP Photo/ Khalil Hamra)

GAZA CITY, Gaza Strip (AP) — Hundreds of Palestinians gathered Saturday for the funeral of a woman killed by Israeli forces during a protest near the perimeter fence, this year's first fatality from the weekly mass demonstrations, and Israeli aircraft struck two Hamas targets in response to rocket fire.

Amal al-Taramsi, a 43-year-old activist who had regularly attended the protests, was shot the day before. Al-Mezan, a Palestinian human rights group, said she was around 200 meters (yards) from the fence when she was shot in the head.

Of the 186 Palestinians killed since the protests were launched last spring, only three were women. A 21-year-old medic and a 14-year-old girl were killed last year. An Israeli soldier was also killed last year.

Amal's mother, Halima, sobbed as she sat in the corner of her home waiting for her daughter's body, which was wrapped with a Palestinian flag.

The Israelis "should leave our lands and let us alone to live in freedom," she said, urging Palestinian factions to unite against Israel and U.S. President Donald Trump.

Gaza's Hamas rulers have orchestrated the protests, in part to call for the lifting of a crippling decade-long Israeli and Egyptian blockade.

The demonstrations draw Palestinians of all ages, but most gather several hundred meters (yards) from the fence. It's usually young men who approach the barrier, hurling rocks and firebombs at Israeli forces on the other side, who respond with tear gas, rubber-coated bullets and live fire.

Israeli forces have shot and wounded thousands of Palestinians since the protests began. A number of fellow protesters attended Saturday's funeral in wheelchairs or walking with crutches.

Israel accuses Hamas of using the protests as a cover for attacks and says it only uses force to defend its borders. The military said some 13,000 people took part in Friday's demonstrations, with a few protesters briefly crossing into Israel through openings in the fence before returning.

Israeli aircraft struck two Hamas positions in response to the violence without inflicting any casualties.

Late Saturday, the Israeli military said a rocket fired from Gaza fell in an open area in southern Israel. There were no reports of injuries. No Palestinian group claimed responsibility for the attack.

In response, Israeli aircraft attacked two Hamas underground structures before midnight. "Hamas is responsible for all events that transpire in the Gaza Strip and emanate from it," the army said in a statement.

Egyptian mediators have visited Gaza in recent days to try and shore up a two-month-old cease-fire between Israel and Hamas, who have fought three wars since 2008 and were nearly embroiled in a fourth in November.

Israel has allowed Qatar to deliver $15 million in aid each month since November to pay the salaries of Hamas civil servants. The latest batch was delayed after a rocket attack earlier this month, but is widely expected to be delivered if the situation remains calm. The weekly protests have been more subdued since the understandings were reached.

Qatar has also bought fuel for Gaza's solo power plant, helping to reduce power outages. Electricity is still only available for a few hours every day, and the tap water in Gaza is undrinkable. The blockade has devastated the local economy in Gaza, where unemployment exceeds 50 percent.

Trump: Will hurt Turkey economically if it hits Kurds