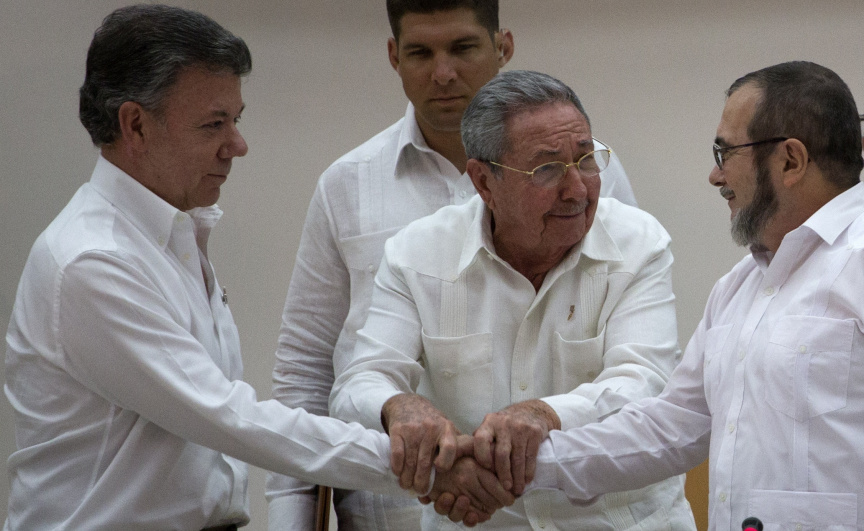 In this Sept. 23, 2015 file photo, Cuba's President Raul Castro brings together the hands of Colombian President Juan Manuel Santos, left, and Commander the Revolutionary Armed Forces of Colombia FARC) Timoleon Jimenez during a ceremony in Havana, Cuba, after Santos and the FARC overcame the last significant obstacle to a peace deal. (AP Photo/Desmond Boylan, File)

BOGOTA, Colombia (AP) — A former Colombian rebel leader has resurfaced in a video months after he turned his back on the peace process amid a U.S. drug-trafficking probe.

Luciano Marin says in the video that he regrets the decision by the Revolutionary Armed Forces of Colombia to hand over its weapons under the 2016 peace accord, accusing the government of betraying its commitments to the guerrillas.

The FARC's former chief peace negotiator, better known by the alias Ivan Marquez, does not reveal his location in the video published Saturday by the leftist Bolivarian Press Agency.

He hadn't been seen since August when he dismissed his government-provided bodyguards and gave up a seat in congress.

U.S. officials are investigating Marquez for alleged drug trafficking that took place after the peace deal was signed.

Trump calls report on FBI probe of him 'most insulting'