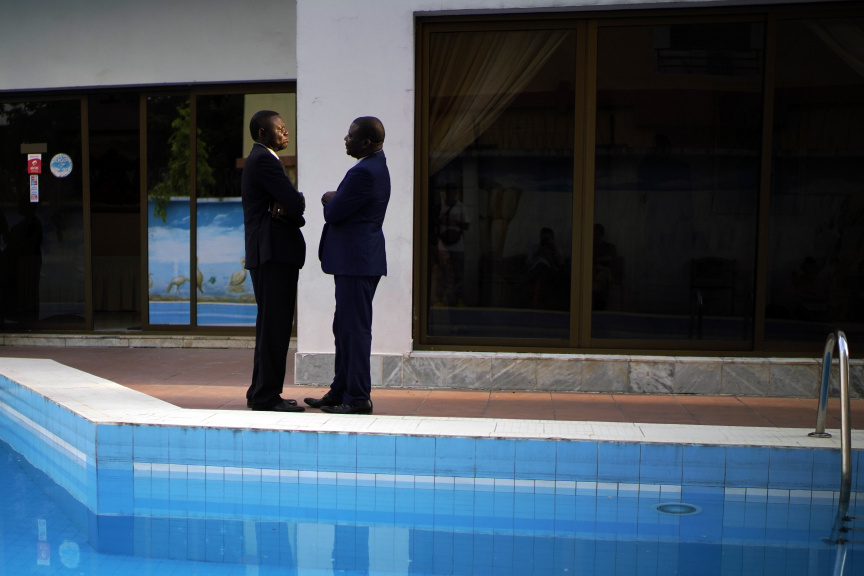 Members of the Congolese opposition coalition Lamuka, led by presidential candidate Martin Faluyu, have a conversation while waiting for a statement to be issued on the timing of the release of the presidential election results in Kinshasa, Congo, Saturday Jan. 5, 2019. (AP Photo/Jerome Delay)

Congo faces what could be its first democratic, peaceful transfer of power since independence from Belgium in 1960, but election observers and the opposition have raised concerns about voting irregularities as the country chooses a successor to longtime President Joseph Kabila.

The first results are expected on Sunday, and the United States and the African Union, among others, have urged Congo to release results that reflect the true will of the people. The U.S. has threatened sanctions against those who undermine the democratic process. Western election observers were not invited to watch the vote.

While Congo has been largely calm on and after the Dec. 30 vote, Trump's letter to House Speaker Nancy Pelosi said about 80 military personnel and "appropriate combat equipment" had deployed to nearby Gabon to support the security of U.S. citizens and staffers and diplomatic facilities. More will deploy as needed to Gabon, Congo or neighboring Republic of Congo, he wrote.

The U.S. ahead of the vote ordered "non-emergency" government employees and family members to leave the country.

The Catholic church, an influential voice in the heavily Catholic nation, caused surprise on Thursday by announcing that data reported by its 40,000 election observers deployed in all polling stations show a clear winner. As regulations say only the electoral commission can announce election results, the church did not give a name.

The electoral commission on Friday said the church's announcement could incite an uprising. The church on Saturday, in a letter to the commission seen by The Associated Press, replied that releasing untrue results could cause the uprising instead.

Leading opposition candidate Martin Fayulu, a businessman and lawmaker, has accused Congolese authorities of impeding his campaign. His campaign manager, Pierre Lumbi, on Saturday accused the electoral commission of being "in the process of postponing the publication of the results."

The commission's rapporteur, Jean-Pierre Kalamba, said "we will see tomorrow" and that 44 percent of the results had been compiled.

At stake is a vast country rich in the minerals that power the world's mobile phones and laptops, yet desperately underdeveloped. Some 40 million people were registered to vote, though at the last minute some 1 million voters were barred as the electoral commission cited a deadly Ebola virus outbreak. Critics said that undermines the election's credibility.

The vote took place more than two years behind schedule, while a court ruled that Kabila could stay in office until the vote was held. The delay led to sometimes deadly protests as authorities cracked down, and Shadary is now under European Union sanctions for his role in the crackdown as interior minister at the time.

Kabila, who took office in 2001 after his father was assassinated, is barred from serving three consecutive terms but has hinted that he could run again in 2023. That has led many Congolese to suspect that he will rule from the shadows if Shadary takes office.

Internet and text messaging services were cut off the day after the election in an apparent effort by the government to prevent social media speculation about the results. The United States has urged that internet service be restored, and a United Nations human rights spokeswoman has warned that "these efforts to silence dissent could backfire considerably when the results are announced."

UN: At least 890 killed in December clashes in Congo