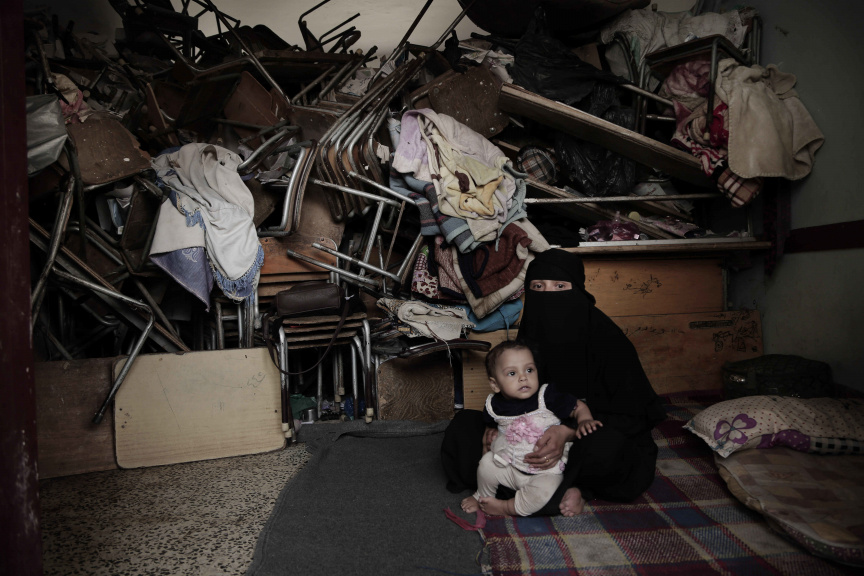 A woman sits with her baby inside a shelter for displaced persons in Ibb, Yemen, in this Aug. 3, 2018 photo. (AP Photo/Nariman El-Mofty)

CAIRO (AP) — The U.N. food agency on Monday threatened to suspend some aid shipments to Yemen if the Houthi rebels do not investigate and stop theft and fraud in food distribution, warning that the suspension would effect some 3 million people.

The World Food Program's ultimatum was an unprecedentedly strong warning, pointing to how corruption has increased the threat of famine in Yemen, where a four-year civil war has created the world's worst humanitarian crisis.

In a letter sent to rebel leader Abdul-Malek al-Houthi, WFP director David Beasley said that a survey carried by the agency showed that aid is only reaching 40 percent of eligible beneficiaries in the rebel-held capital, Sanaa. Only a third are receiving aid in the rebels' northern stronghold of Saada.

"If you don't act within 10 days, WFP will have no choice but to suspend the assistance ... that goes to nearly 3 million people," the letter said. "This criminal behavior must stop immediately."

The Iran-aligned Houthis, who control much of northern Yemen, have been at war with a U.S.-backed and Saudi-led coalition for nearly four years. The stalemated conflict has driven the Arab world's poorest country to the brink of famine, with millions suffering from extreme hunger.

The Associated Press reported Monday that armed factions on both sides of the conflict are stealing much-needed food aid, diverting it to their fighters or reselling it for profit. Some groups are blocking deliveries to communities they view as their enemies.

The WFP is helping around 8 million hungry people in Yemen and has been working to increase its scope to reach a total 12 million. It wants an overhaul of the relief system, including biometric registration, but says the rebels resist such measures.

Biden ending US support for offensive in Yemen