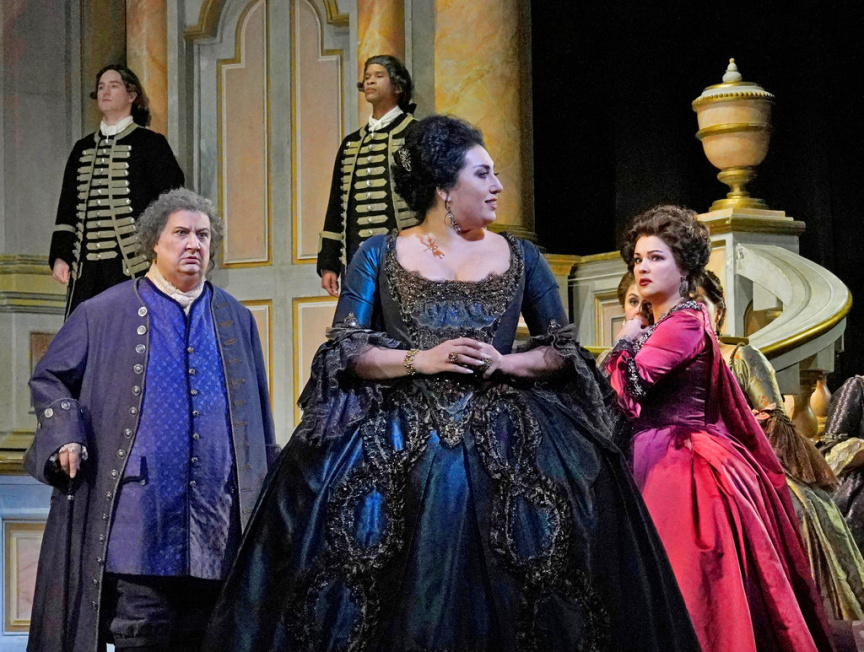 NEW YORK (AP) — The fireworks start early this New Year's Eve at the Metropolitan Opera, where two jealous divas locked in a deadly rivalry will be setting off sparks in a new production of Francesco Cilea's "Adriana Lecouvreur."

Russian soprano Anna Netrebko stars as the title character, loosely based on a real-life 18th-century French actress. Anita Rachvelishvili, a mezzo-soprano from the Republic of Georgia, plays the evil Principessa di Bouillon. The women compete for the dashing Maurizio and, in keeping with legend, the Principessa dispatches Adriana by sending her a bouquet of poisoned violets.

The David McVicar production, which also stars tenor Piotr Beczala as Maurizio, will be broadcast live in HD to movie theaters worldwide on Jan. 12.

"Adriana" marks the second time this season the divas have squared off at the Met over their love for the same man. In Verdi's "Aida," Netrebko sang the title role, while Rachvelishvili portrayed the Egyptian princess Amneris. The Associated Press sat down with them following a rehearsal last week, and here are edited excerpts from the conversation:

AP: You had never appeared together before this season, but you've known each other awhile. How did you meet?

Netrebko: I first saw Anita when she was rehearsing for her first-ever 'Carmen' at La Scala. She was a baby (25 years old, in 2009), with a very grown-up voice and an already grown-up personality artistically.

Rachvelishvili: Of course I knew who she was, and she comes in and I was shocked. I was like, oh my god, Anna Netrebko is in my rehearsal. It was a really beautiful feeling because I was a student who was starting. Now after just nine years of my career I'm here singing next to her. I have to be a lucky person.

AP: What's it like playing romantic rivals when you're friends off-stage?

Rachvelishvili: Knowing Anna, how she is as a person, it's very difficult to look at her with the hate the Principessa must look at her with. I think we are both emotional people so that helps a lot.

Netrebko: We both love music, we're passionate about what we're doing, we have experience on the stage and we love our work.

AP: What are the differing challenges of the two operas?

Netrebko: Aida for me is very hard. Vocally it's a killer. And her personality is not very interesting. I mean, I did what I could from that. But Adriana is more acting, of course, more fun for me personally, and there's more scenes together, the big fighting.

Rachvelishvili: In 'Aida' there's not that much hate between them. Amneris loves her as a sister, it's just that something comes between them (their rivalry for Radames) and she never wants her to die, it just happens and that's all. But in 'Adriana,' my character is really mean, she's really bad, she's a cold-blooded killer.

Netrebko: But it's so cool.

Rachvelishvili: Yeah, it's really cool to play. And I was thinking a lot about how I'm going to do it because it's not in me at all. Amneris could be me as a person. Because I could hate someone who takes my man, and you know be jealous of them and wanting that person to disappear from my life, but not die.

AP: The climax of the opera comes in Act 3 after Adriana learns her rival's identity. She recites a monologue from Racine's 'Phedre' and — just as she reaches the final line about a shameless adulteress — she points her finger at the Principessa. Does Adriana realize she's risking her life when she does this?

Netrebko: I think at that moment she doesn't think anything. She just comes into this kind of trance of speaking this. It's just coming out for her, all this energy because of the stress of what happened a few minutes before. You can sing the monologue if you want, the notes are written. But I choose to speak it, like many others before me. Because she's a dramatic actress and it's a way to show her declamation. It's very exciting.

Rachvelishvili: As someone who sits there onstage and listens to her, it is very emotional, very beautiful, and that's the most difficult moment for me to be hating her. And this really happened. She came to the party and insulted the Principessa in front of everybody.

AP: Why do you think mezzos are so often the villain?

Rachvelishvili: (Laughs.) A soprano, with those soft high notes, doesn't really sound like a mean person. So with all the chest voice, a mezzo can sound more like someone really bad. The challenge in this role is to bring out the cruelty without going too much into the chest. You can't be vulgar because you have to stay a Principessa.