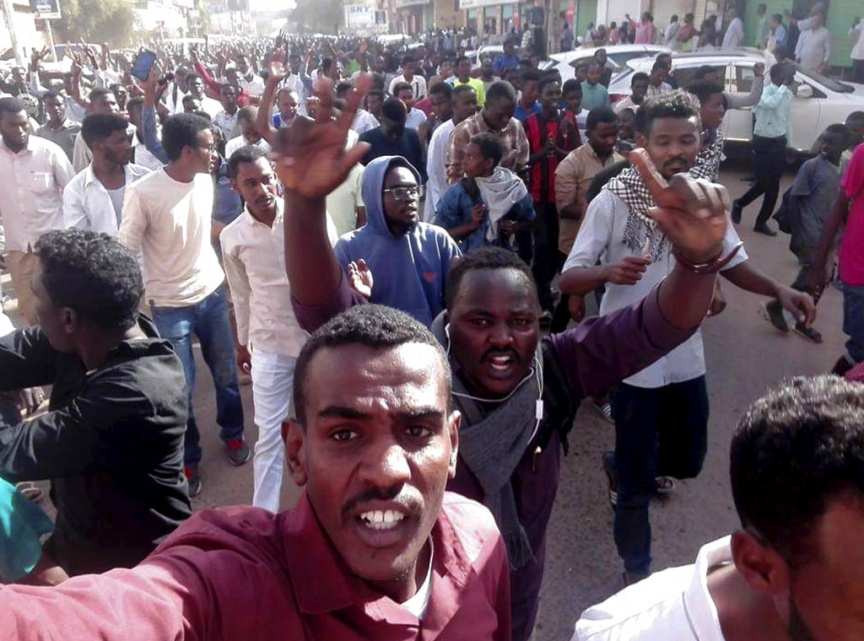 In this Thursday, Dec. 20, 2018 handout photo provided by a Sudanese activist, protesters chant slogans during a demonstration, in Khartoum, Sudan. The protest was one in a series of anti-government protests across Sudan, initially sparked by rising prices and shortages. (Sudanese Activist via AP)

CAIRO (AP) — Police used tear gas and fired in the air Tuesday to disperse thousands of protesters attempting to march on the presidential palace to demand that Omar Bashir, Sudan's president of 29 years, step down, according to activists and video clips posted online.

The clips purported to show crowds of several hundred each gathering on side roads and headed toward the palace on the bank of the Blue Nile in the heart of Khartoum.  They sang patriotic songs and chanted "freedom," ''peaceful, peaceful against the thieves" and "The people want to bring down the regime." The latter was the most popular slogan of the 2010 and 2011 Arab Spring revolts.

Large numbers of security forces were deployed across much of Khartoum Tuesday in anticipation of the march, with soldiers riding in all-terrain vehicles. Police fired in the air, used tear gas and hit demonstrators with batons to disperse them, only for the crowds to assemble again and try and continue their march in pitched battles. There were no immediate reports of casualties.

The protest was called by an umbrella of independent professional unions and supported by the country's largest political parties, the Umma and Democratic Nationalist. The organizers want to submit a petition demanding that Bashir, in power since he seized power in a 1989 military coup, step down.

Tuesday's march follows nearly a week of protests initially sparked by rising prices and shortages of food and fuel, but which later escalated into calls for Bashir to go. The Sudanese leader was in the al-Jazeera region south of Khartoum on a previously scheduled visit Tuesday. Live TV coverage showed him addressing supporters there in a rally and the country's state news agency said he inaugurated a road and a girls' school there.

The petition presented by the protesters demands that the general-turned-president hand over power to a "transitional government of technocrats with a mandate agreed upon by all segments of Sudanese society."

"We are asserting that we will continue to exercise all popular and peaceful options, including general strike and civil disobedience, to bring down the regime," it warned.

The march followed a joint statement late Monday by the United States, Britain, Norway and Canada, which said they were concerned by "credible reports" that Sudan's security forces have used live ammunition against demonstrators. They urged all parties to avoid violence or the destruction of property while affirming the right of the Sudanese people to peacefully protest to express their "legitimate grievances."

The London-based rights group Amnesty International meanwhile said it had "credible reports" that Sudanese police have killed 37 protesters in clashes during the anti-government demonstrations.

An opposition leader said over the weekend that 22 protesters were killed. The government has acknowledged fatalities without providing any figures.

The military vowed Sunday to rally behind Bashir and emphasized in a statement that it was operating in harmony with the police and Sudan's feared security agencies. Also Monday, Bashir said his government would introduce measures to remedy the economy and "provide citizens with a dignified life."

He also warned citizens against what he called "rumor mongers."

The protests over the past week have been met with a heavy security crackdown, with authorities arresting more than a dozen opposition leaders, suspending school and university classes, and imposing emergency rule or nighttime curfews in several cities. There has also been a near-total news blackout on the protests and tighter than usual censorship of newspapers.

Bashir, in his mid-70s, overthrew an elected but ineffective government when he seized power in 1989. He is wanted by the International Criminal Court for committing crimes against humanity and genocide in the western Darfur region, where disgruntled ethnic African tribesmen revolted for a larger share of the nation's resources and to end discrimination by the Arabized and mostly Muslim north.

Bashir has ordered the use of force against protesters in the past — including in the last round of unrest in January — successfully crushing them to remain one of the longest-serving leaders in the region. Although his time in power has seen one crisis after another, he is seeking a new term in office, with loyal lawmakers campaigning for constitutional amendments that would allow him to run in the 2020 election.

Sudan lost three quarters of its oil wealth when the mainly animist and Christian south seceded in 2011 after a long and ruinous civil war against the Khartoum government. More recently, a currency devaluation earlier this year caused prices to surge and a liquidity crunch forced the government to limit bank withdrawals, leading to long lines outside ATMs.