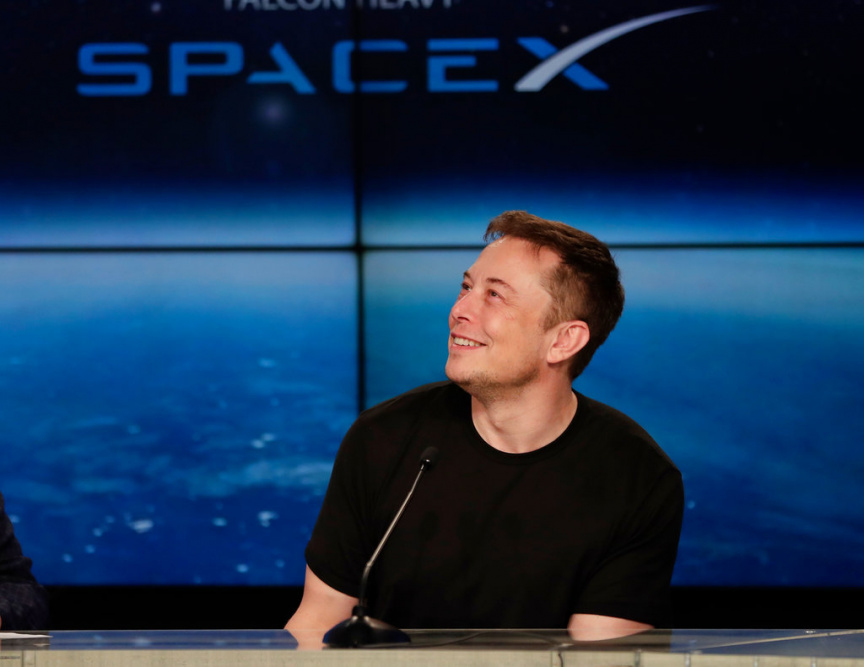 FILE - In this Feb. 6, 2018, file photo, Elon Musk, founder, CEO, and lead designer of SpaceX, speaks at a news conference from the Kennedy Space Center in Cape Canaveral, Fla. Musk is set to unveil an underground transportation tunnel that could move people faster than subways. Musk plans to unveil the test tunnel Tuesday, Dec. 18, 2018, as well as the autonomous cars that will carry people through it. He's also set to show off elevators he says will bring users' own cars from the surface to the tunnel. (AP Photo/John Raoux, File)

Musk also plans to show off the autonomous cars that will carry people through the test tunnel, which runs about 2 miles (3.2 kilometers) under the streets of Hawthorne, California, Musk's SpaceX headquarters. He's also planning to unveil elevators he says will bring users' own cars from street level to the tunnel.

Tuesday's reveal comes almost two years to the day since Musk announced on Twitter that "traffic is driving me nuts" and he was "going to build a tunnel boring machine and just start digging."

"I am actually going to do this," he added in response to initial skepticism.

So began The Boring Company, tongue in cheek intentional. Since the announcement, Musk has revealed a handful of photos and videos of the tunnel's progress.

The tunnel, meant to be a "proof of concept," is being used to help Musk and The Boring Company conduct research and development for a broader system in traffic-plagued Los Angeles and beyond.

One, known as the Dugout Loop , would take Los Angeles baseball fans to Dodger Stadium from one of three subway stations. Another would take travelers from downtown Chicago to O'Hare International Airport. Both projects are in the environmental review phase.

The Boring Company canceled its plans for another test tunnel on Los Angeles' west side last month after a neighborhood coalition filed a lawsuit expressing concerns about traffic and disruptions from trucks hauling out dirt during the boring process.

Musk has described a system in which vehicles would descend via elevators into tunnels and move on electrically powered platforms called skates. Up to 16 pedestrians and bicyclists could board autonomous vehicles also traveling on the skates as fast as 150 mph (240 kph).

"Once fully operational (demo system rides will be free), the system will always give priority to pods for pedestrians & cyclists for less than the cost of a bus ticket," Musk tweeted in May.

For the privately funded test tunnel, Musk acquired a tunnel-boring machine that had been used in a San Francisco Bay Area project and put it down a shaft in a parking lot at the SpaceX headquarters.

Musk's vision for the underground tunnels, known as loop, is not the same as another of his transportation concepts known as hyperloop. That would involve a network of nearly airless tubes that would speed special capsules over long distances at up to 750 mph (1,200) kph), using a thin cushion of air, magnetism and solar power.

The loop system is designed for shorter routes that wouldn't require the elimination of air friction, according to The Boring Company.

The company says on its website that the reason such a system hasn't been done before is that tunnels can be as expensive as $1 billion a mile to dig. But by using the skates to transport cars, which reduces the size of the tunnels needed by about half, thus reducing the cost to build them by up to four times, the company says.

Huawei calls on US to show proof of security risk