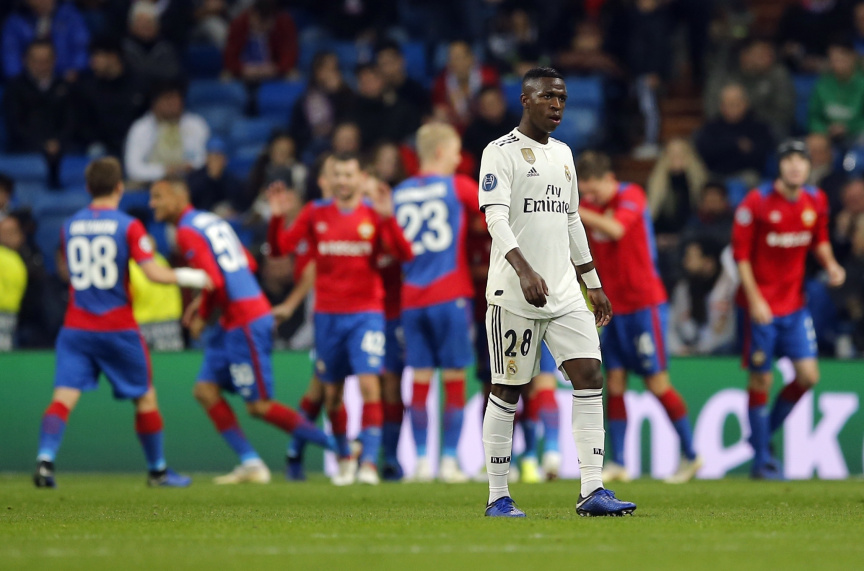 Two of European soccer's grandest clubs paid the price for fielding weakened teams on the final night of Champions League group play, with Real Madrid slumping to a record home loss and Manchester United squandering a surprise opportunity to top its group.

On an evening when Lyon celebrated becoming the 16th and last team to qualify for the knockout stage, Madrid's players were jeered off the field at the Santiago Bernabeu after a 3-0 defeat to CSKA Moscow — its heaviest loss in more than 250 home games in European competition.

"It's a painful result," Madrid left back Marcelo said.

At least that embarrassing loss didn't stop the defending champions from topping their group. United didn't have that luxury.

Like Madrid, United selected a largely second-string lineup with qualification secure, even though Jose Mourinho's team still had a chance of climbing above Juventus to first place with a win.

With Cristiano Ronaldo's Juventus surprisingly losing 2-1 at Swiss club Young Boys, United could have finished top — only to lose by the same score line at the Mestalla. Adding to United's misery, Phil Jones scored an own-goal from outside his own area and Paul Pogba missed a great chance from around four yards out.

"Tonight, it is job done in a difficult group," said Mourinho, whose team is now assured of facing one of the following group winners: Barcelona, Real Madrid, Bayern Munich, Borussia Dortmund, Porto or Paris Saint-Germain.

United was one of four English teams to reach the knockout stage for the second straight season. This was the first year when 16 group-stage places were guaranteed for the Big 4 leagues in Europe — Spain, England, Germany and Italy. The four countries put 12 teams in total into the round of 16, the draw for which is on Monday.

With the Club World Cup only a week away, Madrid coach Santiago Solari rested most of his key players and used several others who hadn't started much this season, including Francisco "Isco" Alarcon and Marco Asensio.

There was no intensity to Madrid's play CSKA capitalized, completing a home-and-away double over the titleholders that still didn't lift the Russian team off last place. Viktoria Plzen beat Roma 2-1 to finish in front, with CSKA needing to better Plzen's result in the Czech Republic.

Fedor Chalov and Georgi Schennikov scored late in the first half for CSKA, and Arnor Sigurdsson added another after the break.

Mourinho might also have had one eye on an upcoming game, with United playing great rival Liverpool in the Premier League on Sunday.

His understrength team still featured Pogba, France's World Cup-winning midfielder who has fallen out of favor with Mourinho and started on the bench for the last two Premier League games.

Pogba's chances of getting back in the starting lineup for the weekend won't have been helped by his bad miss when the score was 0-0, prodding the ball wide from inside the six-yard box.

Carlos Soler put Valencia in front with a driven first-time finish after latching onto Jones' clearing header in the 17th, and the United center back made an even bigger error for the second goal in the 47th. Jones slid in to clear the ball as he chased down Valencia striker Michy Batshuayi, but only succeeded in slotting it past Sergio Romero from 20 meters with the goalkeeper having come off his line.

Marcus Rashford pulled a goal back in the 87th for United.

Ronaldo played the whole game for Juventus, which was undone by goals from veteran Young Boys forward Guillaume Hoarau in the 30th and 68th minutes. Paulo Dybala cut the deficit in the 80th.

Only one qualification place was up for grabs on the final night of group play and it was a straight shootout in freezing sleet between Lyon and Shakhtar Donetsk, which was forced to play its home game in Kiev after it was relocated due to martial law in various regions of Ukraine.

Shakhtar dropped into the Europa League

Bayern Munich's wild 3-3 draw at Ajax — featuring four goals from the 82nd minute, including an equalizer for Ajax five minutes into stoppage time — earned the German champion first place in Group E above the Dutch team. Both sides had already qualified.

Benfica was already assured of third place and a Euroa League spot before beating AEK Athens 1-0.