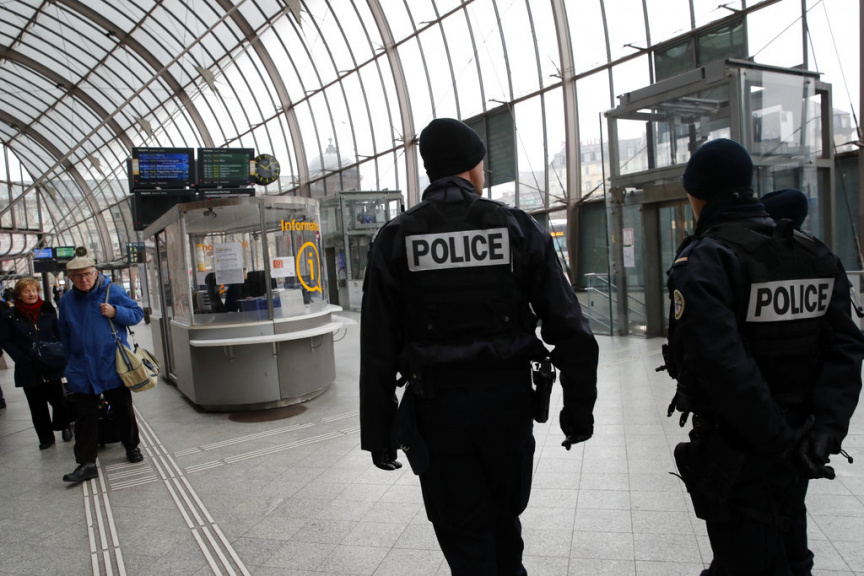 Police officers patrol in the railway station of the city of Strasbourg following a shooting, eastern France, Wednesday, Dec. 12, 2018. A man who had been flagged as a possible extremist sprayed gunfire near the city of Strasbourg's famous Christmas market Tuesday, killing three people, wounding 12 and sparking a massive manhunt. France immediately raised its terror alert level. (AP Photo/Christophe Ena)

STRASBOURG, France (AP) — The Latest on a shooting attack at a Christmas market in France (all times local):

A minute's silence will be held at all soccer stadiums in the French first and second division this weekend following Tuesday night's deadly Christmas market attack in Strasbourg.

Authorities say two people were killed, one left brain dead and 12 others injured in the shooting rampage.

Three matches in the first division have been postponed this weekend at the request of authorities, with police resources stretched.

A young Italian radio journalist who was in Strasbourg to cover a session of the European Parliament is in critical condition after being shot in the Christmas market attack.

The news agency ANSA said Wednesday that 28-year-old Antonio Megalizzi was struck by a bullet at the base of his cranium. ANSA says his parents, sister and girlfriend have traveled to France to join him.

Megalizzi is a journalist with the Europhonica radio consortium linked to universities. Italian daily La Repubblica reports that he traveled Strasbourg on Sunday to follow the European Parliamentary session. Megalizzi is from the northern city of Trento, and is working on a masters focusing on European institutions.

Europhonica has posted a Facebook message saying it cannot confirm any news about his health.

French lawmakers have held a minute's silence at the National Assembly for victims and their families following Tuesday night's deadly Christmas market attack in Strasbourg.

Interior minister Christophe Castaner has paid tribute to three people who tried to stop the gunman in streets near the famous market, including a woman who suffered stab wounds.

He said Wednesday their actions highlighted "our compatriots' ability to be heroic." Lawmakers from all parties applauded his comments.

Socialist and far-left lawmakers have asked to postpone a no-confidence vote against the government linked to its handling of the Yellow Vest protests, saying they want to preserve the nation's unity at difficult times. The vote had been scheduled for Thursday

A Thai Foreign Ministry spokeswoman says the country's embassy in Paris has confirmed that a Thai national, 45-year-old Anupong Suebsamarn, was killed in a deadly Christmas market shooting in the French city of Strasbourg.

Anupong had been traveling with his wife.

The English-language website of the newspapaer Khao Sod said Anupong was the owner of a noodle factory in Chachoengsao province, east of Bangkok, and also sold clothes in the Thai capital's garment district.

It quoted his uncle as saying the couple had originally planned to be in Paris, but the yellow vest protests there caused them to change plans and go to Strasbourg instead.

A judicial official says that the father and two brothers of the man suspected of attacking the Strasbourg Christmas market are among four people in custody in the investigation.

The suspected gunman himself, identified by police union officials as 29-year-old Cherif Cherkatt, is at large.

He was on a police watch list for radicalism before Tuesday's attack. The judicial official says that other members of Cherkatt's family are also known for radical views.

The official was not authorized to be publicly named speaking about an ongoing investigation.

Authorities say two people were killed, one left brain dead and 12 others injured in the shooting rampage.

The German government says it has stepped up controls on the country's border with France following Tuesday night's attack in Strasbourg, but sees no change to the threat level in Germany.

Interior Ministry spokeswoman Eleonore Petermann said there's no reason to stay away from Christmas markets in Germany. A Christmas market in Berlin was targeted in a deadly attack two years ago.

Petermann and Germany's justice ministry said that German authorities had no information on links between the suspected attacker, who previously spent prison time in Germany for robbery, and Islamic extremists.

The suspect, who killed at least two and injured about a dozen others Tuesday, was convicted in Germany in 2016 and reportedly deported to France in 2017. Petermann said, however, that his freedom of movement within the European Union had been removed.

French President Emmanuel Macron is holding an emergency security meeting at the presidential palace in Paris following Tuesday's attack in the eastern city of Strasbourg that killed at least two and injured about a dozen others.

The defense council is taking place in the presence of top military officials and government members, including the prime minister, interior, defense and foreign affairs ministers.

They will discuss the progress of the investigation and other security measures as the government raised the alert level nationwide and sent police reinforcements to Strasbourg in a manhunt for the suspect.

Interior minister Christophe Castaner was back Wednesday in Paris after travelling to Strasbourg overnight to supervise police operations.

Neighbors of the man suspected of attacking Strasbourg's Christmas market have described him as destabilized by his time in prison.

"You can just tell," said one of the young men from the apartment block where suspected gunman Cherif Chekatt lived, lightly touching the side of his head. They feared being publicly named because the gunman is still being hunted by police.

A neighbor, who also asked not to be named, said he was rarely home. She said she last saw him Monday from her window, which looks out on a common hallway, and he was with another man.

The lock of the door is broken at the suspect's apartment. Police were guarding the building where the gunman was believed to have lived, in an outer neighborhood of Strasbourg.

Hundreds of police and soldiers are hunting for Chekatt, 29, who opened fire near Strasbourg's Christmas market Tuesday, killing two and leaving one brain dead.

A French prosecutor says witnesses heard the suspected gunman shout "God is great" in Arabic during the shooting spree in Strasbourg that killed two people and left another brain dead.

Prosecutor Remy Heitz said the suspected gunman was shot in the arm during an exchange of fire with French soldiers in the city center and then took a taxi to another part of the city during the rampage on Tuesday night.

He said the man was armed with a handgun and a knife, using them to attack his victims. He also left 12 people injured.

He also said police found a grenade, a rifle and four knives during a search Tuesday morning of the 29-year-old's house. They had wanted to take him into custody as in an investigation for suspected murder.

The official said his apartment was searched by police on Tuesday morning — hours before the shooting — in an investigation for attempted murder. He was not at home at the time.

The two officials spoke anonymously because they were not allowed to speak publicly on an ongoing investigation.

The suspect was still on the run on Wednesday after he fired gunshots near the famous Christmas market of Strasbourg, killing three and wounding at least 13.

The European Parliament is planning a minute of silence at noon to remember the victims of the Strasbourg shooting, which happened only a few kilometers (miles) from the legislature.

European Parliament Antonio Tajani called the shooting "a criminal attack against peace, against democracy, against our model of life."

He said that even as the Parliament went into a lockdown late Tuesday, legislators continued their work until midnight. "We have to go forward and not change our ways," Tajani said.

The suspected Strasbourg gunman was convicted of robbery in Germany in 2016 and sentenced to two years and three months in prison for breaking into a dental practice and a pharmacy.

The verdict from a district court in Singen, obtained by The Associated Press, says he was also sentenced to prison in France in 2008 and in Basel, Switzerland in 2013 for various robberies. News agency dpa reported that he was deported to France in 2017.

According to the verdict, the suspected attacker grew up with six siblings in Strasbourg, worked for local authorities after leaving school and had been unemployed since 2011. He said he had been traveling a lot and had already spent four years in prison. The German robberies took place in Mainz, near Frankfurt, in 2012 and in Engen, near the Swiss border, in 2016.

A senior French government official says that five people have been detained as police hunt for the man who attacked the Strasbourg Christmas market, but the gunman remains at large.

Laurent Nunez, secretary of state for the interior ministry, said Wednesday on France-Inter radio that the attacker could have fled to neighboring Germany.

He said that three people were killed and 13 injured, eight of them seriously. He denied reports of a police intervention at the city's famed cathedral but said the search for the attacker is constantly evolving.

Nunez said the assailant had been identified as a suspected extremist during his past stays in prison but said the motive for the attack remains unclear. A terrorism investigation was opened.

France is hunting for a suspected extremist who sprayed gunfire near the famous Christmas market in the eastern city of Strasbourg, killing three and wounding at least 11.

The government raised the security alert level and sent police reinforcements to Strasbourg where some 250 security forces are searching for the assailant.

The attacker is a 29-year-old with a police record in France and neighboring Germany who had been flagged for extremism. A terrorism investigation was opened.

While authorities urged people in the area to stay inside, Strasbourg Mayor Roland Ries told BFM television Wednesday that "life must go on" so that the city doesn't cede to a "terrorist who is trying to disrupt our way of life."

Strasbourg is considered one of Europe's capitals. It's home to the European Parliament.