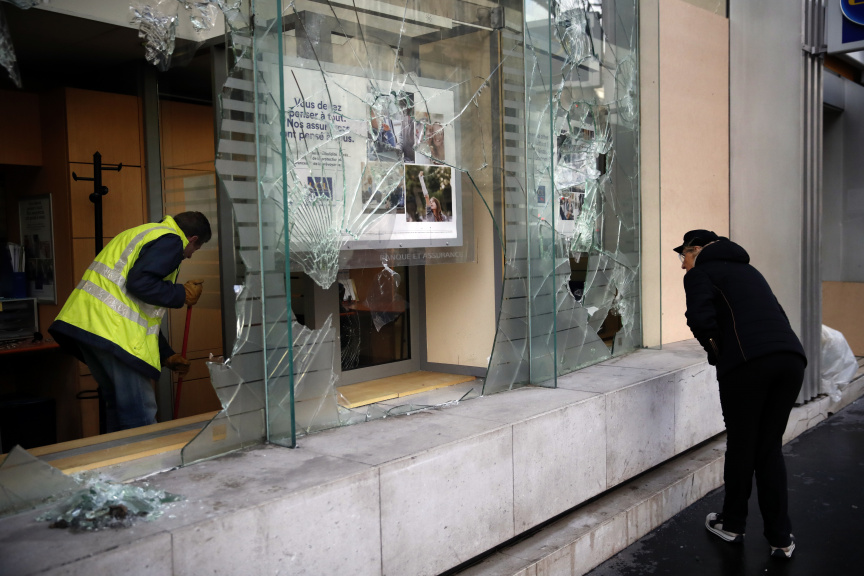 A worker clears debris in a bank as a man watches through smashed windows, in Paris, Sunday, Dec. 9, 2018. (AP Photo/Christophe Ena)

PARIS (AP) — Pressure mounted on French President Emmanuel Macron to announce concrete measures to calm protests marked by violence when he addresses the nation Monday evening, and breaks a long silence widely seen as aggravating a crisis that has shaken the government and the whole country.

The president will consult in the morning with an array of national and local officials as he tries to get a handle on the ballooning and radicalizing protest movement triggered by anger at his policies, and a growing sense that they favor the rich.

Macron will speak from the presidential Elysee Palace at 8 p.m. (1900 GMT), an Elysee official said. The official wasn't authorized to speak publicly and requested anonymity.

Government spokesman Benjamin Griveaux said earlier on LCI TV station he was "sure (Macron) will know how to find the path to the hearts of the French, speak to their hearts." But, he added, a "magic wand" won't solve all the problems of the protesters, known as "yellow vests" for the fluorescent safety vests they often wear.

Last week, Macron withdrew a fuel tax hike — the issue that kicked off protests in mid-November — in an effort to appease the protesters, but the move was seen as too little too late.

For many protesters, Macron himself, widely seen as arrogant and disconnected from rank-and-file French, has become the problem. Calls for him to resign were rampant on Saturday, the fourth weekend of large-scale protests.

"Macron is there for the rich, not for all the French," 68-year-old retiree Jean-Pierre Meunuer said Saturday. Retirees are among the categories to be punished by his policies.

Labor Minister Muriel Penicaud dampened any notion that the minimum wage would be raised, telling LCI that "there will be no boost for the Smic (minimum wage)," because "it destroys jobs."

Paris tourist sites reopened Sunday, while workers cleaned up debris from protests that left widespread damage in the capital and elsewhere. At least 71 were injured in Paris on Saturday.

The economy minister, meanwhile, lamented the damage to the economy.

"This is a catastrophe for commerce, it's a catastrophe for our economy," Bruno Le Maire said Sunday while visiting merchants around the Saint Lazare train station, among areas hit by vandalism as the pre-Christmas shopping season got underway.

After the fourth Saturday of nationwide protests by the grassroots movement with broadening demands, officials said they understood the depth of the crisis. Le Maire said it was a social and democratic crisis as well as a "crisis of the nation" with "territorial fractures."

However, the president must also speak to protesters' pocketbooks. Among myriad demands was increased buying power.

French media reported 136,000 protesters nationwide on Saturday, similar to the previous week. However, the number of injured in Paris and nationwide was down. Still, TV footage broadcast around the world of the violence in Paris neighborhoods popular with tourists has tarnished the country's image.

Several tourists questioned at the Eiffel Tower, which reopened Sunday after closing Saturday, said they were avoiding the Champs-Elysees, Paris' main avenue that is lined with shops and cafes and normally a magnet for foreign visitors.

"Yes, we're very concerned with security ... but we couldn't cancel the trip," Portuguese tourist Elizabet Monteero said. But, she added, "We don't go to dangerous zones like the Champs-Elysees."

Foreign Minister Jean-Yves Le Drian politely chastised U.S. President Donald Trump for mocking France in tweets over the 2015 Paris climate accord, which the U.S. is leaving and which Macron has championed worldwide.

"We don't take part in American debates. Let us live our own national life," Le Drian said in an interview on the LCI TV station. He said Macron had told Trump the same thing.

Trump tweeted twice on the issue over the weekend, saying in one that "the Paris agreement isn't working out so well for Paris," referring to Macron's predicament.

Nearly 1,000 people, almost 100 of them minors and most without police records, were being held in custody after the Saturday protests in the French capital, Paris chief prosecutor Remy Heitz said, adding that most of those in custody were men under 40 from various regions who came to Paris to protest. Most were taken in for carrying weapons, like knives, or objects that could be used to cause injury, including petanque balls or tear gas.

Courts were working overtime to process the cases, he said.

France deployed around 89,000 police but still failed to deter the determined protesters. More than 125,000 "yellow vests" took to the streets Saturday around France with a bevy of demands related to high living costs and a sense that Macron favors the elite and is trying to modernize the French economy too fast.

It won't be enough to announce negotiations, he said in an interview with The Associated Press. People want change and "concrete, immediate, right now" measures.

Even if Macron withdraws his signature slashing of the wealth tax, "half of the yellow vests will go home, the other half will want him to resign and will stay in the streets," Valette predicted. "Because the movement isn't controllable."

There was also damage in other cities, notably Marseille, Toulouse and Bordeaux.

Seventeen of the injured were police officers. Jean-Claude Delage of the Alliance police union urged the government on Sunday to come up with responses to France's "social malaise." He told BFM television that working class protesters were deliberately targeting high-end shops in Paris that were selling goods they couldn't afford.

Luxury shops on the posh Avenue Montaigne were totally boarded up on Saturday.

In a knock at Macron, graffiti on the wall of one read: "You don't cross the street, you take it," mocking the president's response to a young unemployed gardener that he can "cross the street" to find a job.

Knifeman in France kills 2 in attack

France closes the Louvre as virus spreads to new fronts