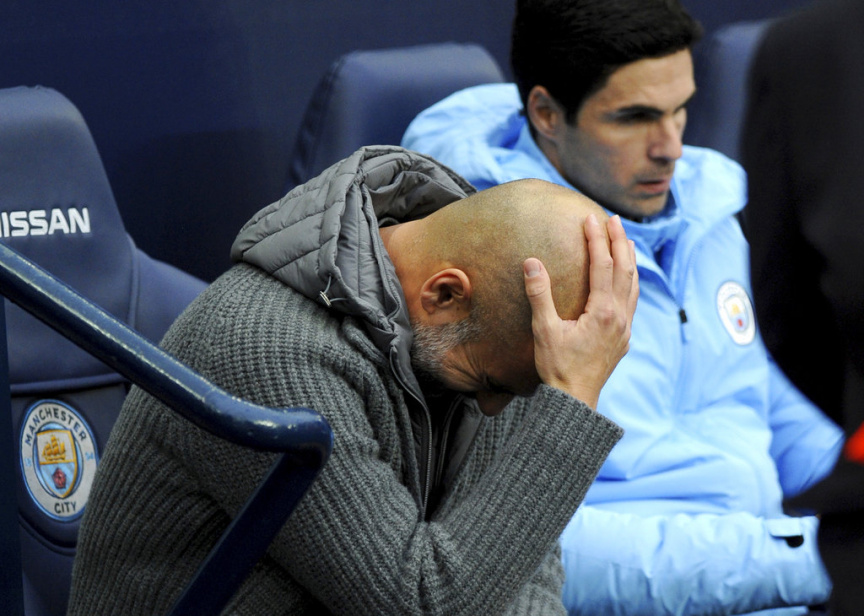 LONDON (AP) — European soccer's leadership has an initial conclusion on leaked Manchester City correspondence: The club has been misleading UEFA over its finances.

With the power to ban clubs from the Champions League, the consequences from UEFA could be severe for the Premier League champions.

UEFA discovered from reading internal emails from City, which were published by German media outlet Der Spiegel last month, the extent of schemes by the club to allegedly cover up the true source of income in a bid to comply with Financial Fair Play regulations, a person with direct knowledge of the situation told The Associated Press. The person spoke on condition of anonymity because they were not authorized to discuss the situation publicly while UEFA conducts a review of the City case.

City has been transformed into an English soccer power in the decade since being bought by Sheikh Mansour bin Zayed Al Nahyan, a deputy prime minister of the United Arab Emirates and a member of Abu Dhabi's royal family, winning the Premier League three times since 2012. But unfettered spending on players has been restricted by European soccer's governing body — regardless of the owners' wealth.

City has already been punished by UEFA for violating FFP, striking an agreement in 2014 that saw the team fined rather than banned from the Champions League for inflated sponsorship deals with companies linked to the club or its ownership.

UEFA publicly said last month that evidence from "Football Leaks" could lead to past cases being re-opened. The person with knowledge of the situation said it was more feasible to use the leaks to re-assess the candor of club executives and as a basis to judge City's compliance with FFP in the current three-year assessment period.

That covers 2015 when Der Spiegel said emails were being sent internally at City showing the manipulation of sponsorship revue from Etihad Airways, the state-owned airline from Abu Dhabi, which is the naming rights sponsor of City's stadium and training campus as well as appearing on jerseys. The sponsorship was said to generate 67.5 million pounds (about $85 million) annually for City. But City's holding company — the state-backed Abu Dhabi United Group — channeled 59.9 million pounds back to Etihad, according to Jorge Chumillas, the club's chief financial officer, in an internal email to club director Simon Pearce.

City has not disputed the authenticity of any emails published by Der Spiegel over the last month. Given the fresh insight into City's financial dealings, UEFA President Aleksander Ceferin has said there was a "public interest" in the correspondence being leaked, while questioning how it was obtained.

"We are assessing the situation. We have an independent body working on it," Ceferin said Monday. "Very soon you will have the answers on what will happen in this concrete case."

FFP was the flagship policy of Michel Platini, Ceferin's predecessor as UEFA president, and introduced at the height of the global financial crisis in attempt to prevent clubs from becoming unsustainable.

Since July 2011, UEFA has monitored the accounts of all clubs entering its two club competitions. The first period UEFA assessed clubs for compliance with FFP was 2011-13, when owners were allowed to cover losses up to 45 million euros.

The leaks showed how City allegedly tried to artificially raise its revenue, in one case by 30 million euros, according to emails from 2013 reported by Der Spiegel. Abu Dhabi United Group was alleged to be sending cash to a shell vehicle which was created to supposedly buy the right to use players' images in marketing campaigns.

There were further examples that Sheikh Mansour could have been the source of sponsorship revenue for Abu Dhabi state-owned companies like investment firm Aabar. Der Spiegel cited a 2010 email to Aabar from Pearce, the City director who also works for Abu Dhabi's Executive Affairs Authority.

"As we discussed, the annual direct obligation for Aabar is GBP 3 million," Pearce wrote. "The remaining 12 million GBP requirement will come from alternative sources provided by His Highness."

Seeing internal City correspondence has given UEFA a greater insight into the conduct of the club and its officials. A 2014 email from City lawyer Simon Cliff to a colleague showed the death of UEFA's lead FFP investigator being celebrated: "1 down, 6 to go."

UEFA is examining whether to open disciplinary cases against individuals at City involved in attempts to provide a misrepresentation of club finances to the governing body's FFP accessors, another person with direct knowledge of the situation said. The person, who did not identify any individuals, spoke to the AP on condition of anonymity because they were not authorized to publicly discuss the City case.

A challenge for UEFA is getting City to provide information from related companies in Abu Dhabi that the leaks show are central to compliance with FFP.

City has repeatedly declined to respond to the specific allegations in the leaks, dismissing a month of negative headlines by saying: "The attempt to damage the club's reputation is organized and clear."

But City has had no such qualms using its website to cast aspersions on the reputations of other clubs over their ability to comply with FFP. City has used the media watch section on its website to cite unsubstantiated news reports, including a claim in 2016 that "Inter Milan are looking to circumnavigate FFP" and speculation this year that if Paris Saint-Germain "are found to have broken FFP regulations they face being booted out of the Champions League." Those pages were deleted from its website after City was approached for comment by the AP.