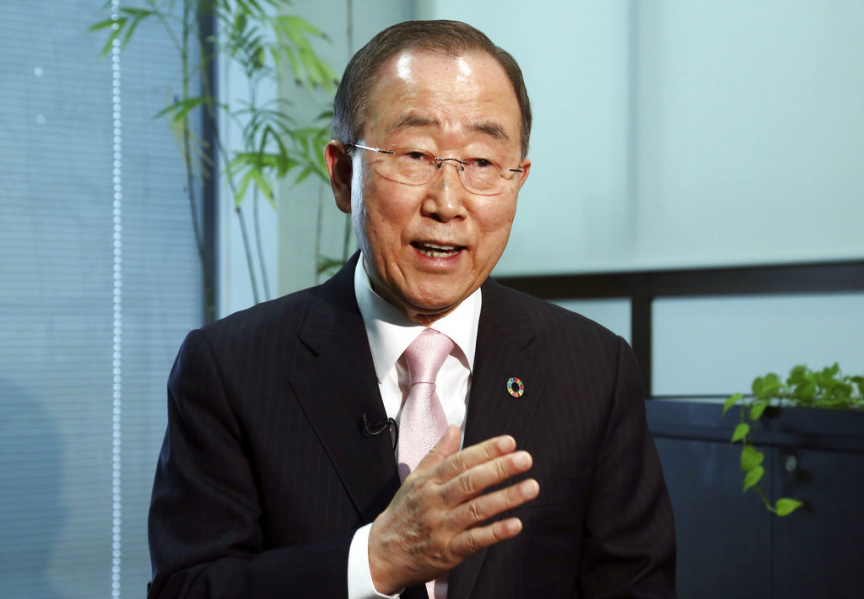 Ban, a former South Korean foreign minister, said "this is the time" to achieve North Korea's denuclearization after nearly a quarter century of unsuccessful efforts, and that the North and the world should not lose this opportunity.

"I'd like to really advise the North Korean leader that the world is ready" to help his country, Ban told The Associated Press, specifically citing South Korea, the U.S., China, Japan and Russia. He said denuclearization is important for a better future for the two Koreas, including reconciliation and reunification.

"I hope this is the time — please do not lose this opportunity," he said.

Kim sharply raised tensions with nuclear and missile tests last year, but suddenly reached out to South Korea and the United States this year with a vague nuclear disarmament pledge.

North Korea is seeking security guarantees from the U.S. and relief from international sanctions.

U.S. President Donald Trump and South Korean President Moon Jae-in say tensions have eased significantly since then, but Ban, who is in Tokyo for an event organized by a business group, said the crisis is not over and that North Korea should fully disclose its nuclear weapons inventory to a trusted international organization such as the International Atomic Energy Agency.

"The crisis is still continuing because of North Korea's development of nuclear, missile and weapons program and materials," Ban said. "It is North Korea which should clearly state and show by taking actions, then I am sure that there will be no reason why the Security Council of the United Nations will continue to impose the sanction on North Korea."

Moon has facilitated a series of high-level talks between the U.S. and North Korea, including a summit between Trump and Kim in June, and has met Kim three times this year. After their third meeting in North Korea's capital of Pyongyang in September, Moon said Kim agreed to make a reciprocal visit to Seoul this year. If that happens, he would be the first North Korean leader to do so since the end of the 1950-53 Korean War, though the plan is still unclear.

Trump recently said he is likely to hold a second summit with Kim in January or February. Ban said he hopes the summit will occur at a time when the international community feels confident about North Korea's commitment to denuclearization.

This story has been corrected to say Ban was in Tokyo to attend an event organized by a business group, not the World Bank.