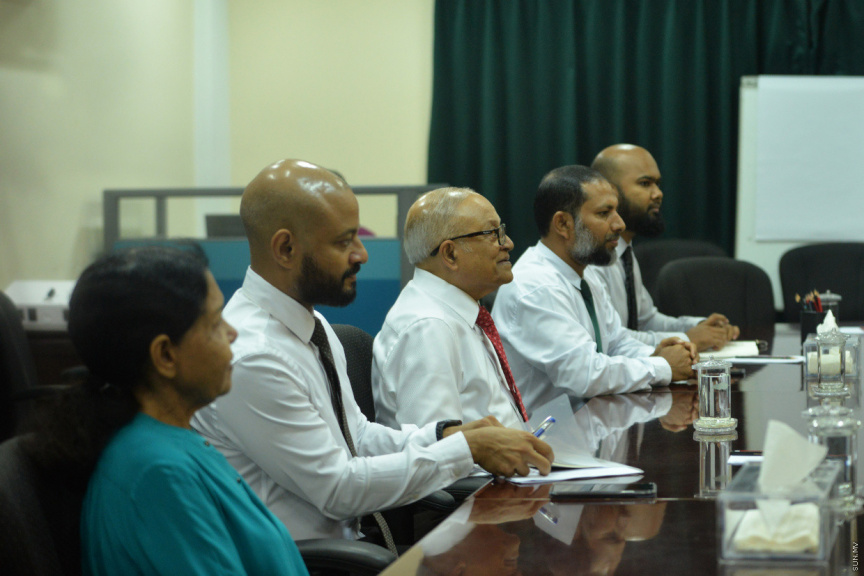 Former Maldivian President Maumoon Abdul Gayoom (C) at meeting of the leaders of government coalition to make a decision on Parliamentary Elections 2019 at the MDP headquarters on November 29, 2018. (Sun Photo/Ahmed Awshan Ilyas)

Former Maldivian President Maumoon Abdul Gayoom has made his first ever visit to the headquarters of Maldivian Democratic Party (MDP) – the party instrumental in de-seating him.

Maumoon, along with the other leaders of the government coalition convened at the MDP headquarters this Thursday morning to negotiate and reach a decision on the upcoming parliamentary elections.

Maumoon was escorted to the meeting by members of the Maumoon Reform Movement (MRM) – his son Dhiggaru MP Ahmed Faris Maumoon and Aneesa Ahmed – a former Cabinet minister during his administration.

Maumoon, former Maldivian President and Leader of MDP Mohamed Nasheed, Leader of Jumhoory Party and Speaker of Parliament Qasim Ibrahim, and Leader of Adhaalath Party and Minister of Home Affairs Sheikh Imran Abdulla are expected to reach a decision on how the coalition will approach the parliamentary elections during Thursday’s meeting.

Former rivals Maumoon and Nasheed are now allies, and were instrumental in the campaign to de-seat former Maldivian President Abdulla Yameen Abdul Gayoom.