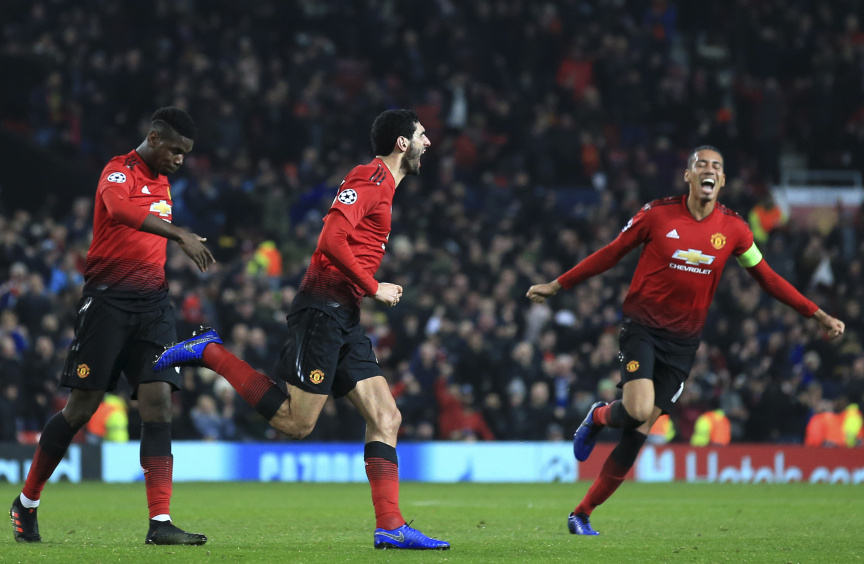 After Fellaini sent a shot on the turn into the bottom corner to secure a 1-0 win over Young Boys at Old Trafford on Tuesday, Mourinho let out a guttural roar as he picked up a basket of water bottles and threw them forcefully to the ground in his technical area.

Mourinho gave Fellaini a big hug as the Belgium midfielder walked off the field after the game. Fellaini might split opinion among fans — United tends to use a direct, long-ball approach when he is in the team — but he remains a firm favorite of his coach and a go-to player for his teammates in the latter stages of matches.

Without Fellaini's goal, United would have faced a tricky trip to Valencia on the final match day in a bid to seal qualification.

Instead, the English club advanced from Group H along with Juventus, which stayed in first place thanks to a 1-0 win over Valencia.

And Mourinho certainly enjoyed it.

"For some of my lovers," he said, "I just want to say for the ones that like statistics: 14 seasons in the Champions League, 14 times qualify through the group phases.

"The season I didn't play Champions League, I won the Europa League"

This, however, was another underwhelming display against a team United swatted aside in a 3-0 win in Switzerland at the start of group play.

Indeed, United needed a superb reflex save from goalkeeper David De Gea, who clawed away Ulisses Garcia's deflected shot, to keep the home side level heading into the final 20 minutes.

"It looks a phenomenal save," Mourinho said, "a save the best goalkeeper in the world does, and gives his team the possibility to win the match."

Mourinho talked up the significance and difficulty of this match against the runaway leader of the Swiss league, yet decided to drop his two most-expensive signings — Romelu Lukaku and Paul Pogba, worth a combined $210 million — in something of a statement following a lackluster 0-0 draw with Crystal Palace in the Premier League on Saturday.

Marcus Rashford started as the lone striker in place of Lukaku, and caused Young Boys constant problems in the first half with his pace and movement. The 21-year-old Rashford lacked an end product, though, with one of his three good chances seeing him lift a finish over the crossbar when played clean through.

Mourinho, who has been publicly critical of his young players in recent days, responded by turning his back to the field, crossing his arms and shaking his head.

Young Boys was dangerous on the counterattack and really took the game to United in the second half, with Garcia's chance coming amid its best spell of the game.