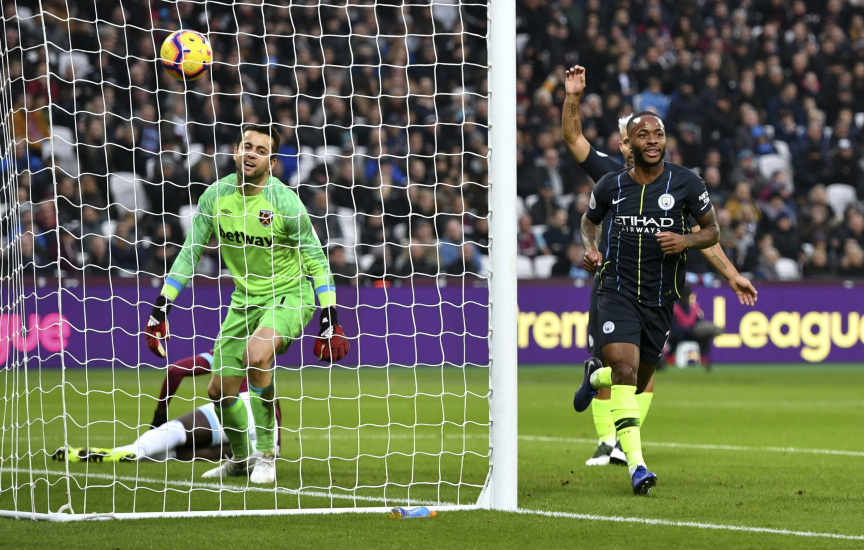 LONDON (AP) — Manchester City wingers Leroy Sane and Raheem Sterling produced dazzling displays in a 4-0 win over West Ham in the Premier League on Saturday as the leaders picked up where they left off before the international break.

Sterling's deflected cross fell into the path of David Silva to turn in the opener in the 11th, and the winger tapped in at the far post from Sane's low center to make it 2-0 in the 20th.

Sterling turned provider again for the best goal of the game, cushioning a volley across the box for Sane, who controlled the ball, span a defender and tucked home a finish from close range in the 34th.

Sane then drove in a powerful finish from substitute Gabriel Jesus' cross in the third minute of injury time at the Olympic Stadium.

The win kept City top by two points and took its average goal-per-game tally in the league this season to above three. It came at the expense of a team managed by Manuel Pellegrini, the coach who was replaced at City by Pep Guardiola in 2016.

City had periods of attacking brilliance under Pellegrini, particularly in the first of his three seasons in charge, but it is relentless under Guardiola.

Sterling, in particular, has been reinvented under the Spanish coach and has now scored seven goals in the Premier League this season, to follow on from his 18 from last season.

This could also be a period where Sane blossoms, now that left back Benjamin Mendy is out for up to three months because of a knee injury sustained in the 3-1 win over Manchester United before the international break. That should mean Sane gets more starts as the player offering genuine width on the left and the quality of his goals will have impressed Guardiola.

City didn't have to really hit top form, three days before it heads to Lyon looking for a win to clinch a place in the Champions League knockout stage.