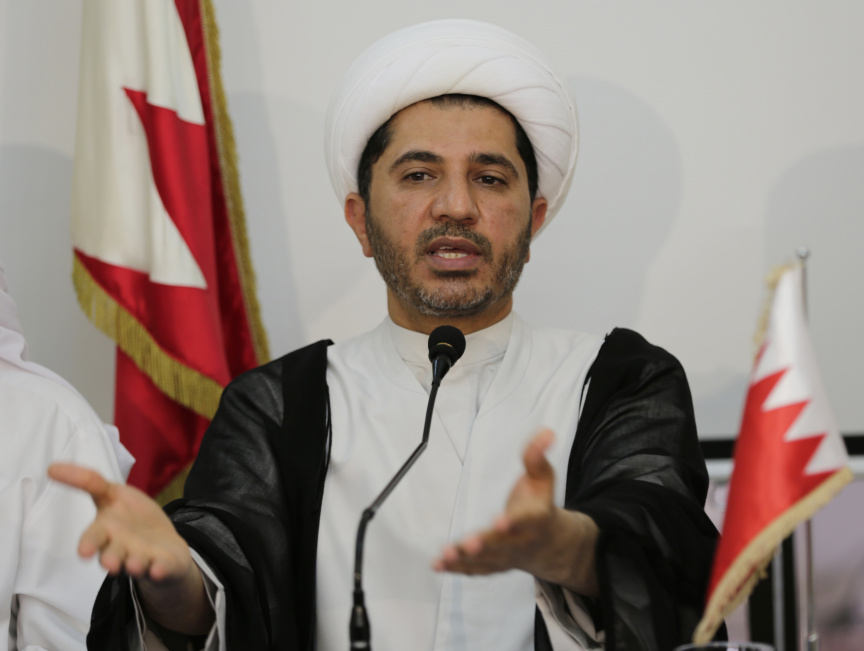 In this Oct. 11, 2014 file photo, Sheikh Ali Salman, leader of the main Shiite opposition group Al-Wefaq, explains why his and other opposition groups are refusing to participate in upcoming elections at a press conference in Manama, Bahrain. Salman, a Shiite cleric who was a central figure in Bahrain's 2011 Arab Spring protests was sentenced to life in prison Sunday, Nov. 4, 2018, on spying charges. (AP Photo/Hasan Jamali, File)

DUBAI, United Arab Emirates (AP) — A Shiite cleric who was a central figure in Bahrain's 2011 Arab Spring protests was sentenced to life in prison Sunday on spying charges.

The ruling by the Supreme Court of Appeals came after Sheikh Ali Salman was acquitted of the charges by a lower court in June. Human rights groups and activists say the charges against him are politically-motivated and related to his work as a leading opposition figure.

The verdict was issued just weeks before parliamentary elections are set to take place without the Al-Wefaq political group Salman once led. Al-Wefaq, which was the tiny Gulf nation's largest Shiite opposition bloc, was ordered dissolved in 2016 as part of a crackdown on dissent in the kingdom, which has a Shiite majority but is ruled by a Sunni monarchy.

Bahrain is one of four Arab countries that have been boycotting Qatar for over a year as part of a wider diplomatic dispute.

A government-sponsored report on the 2011 protests and unrest noted Bahrain's opposition had accepted an idea for mediation by Qatar during the uprising, but Bahrain's government had rejected it. Salman's supporters say calls to Qatar were related to those efforts and that recordings were edited to suggest otherwise.

Bahrain is home to the U.S. Navy 5th Fleet. The 2011 uprising there was quelled with help from Saudi and Emirati forces.

Salman, in his early 50s, has long been targeted by Bahrain's government. In 1994, he was arrested, allegedly tortured and detained for months without trial before being deported and forced to live in exile for over 15 years, according to the United Nations.

He is currently serving out a four-year sentence in another trial on charges he insulted the Interior Ministry, which oversees police, incited others to break the law and incited hatred against naturalized Sunni citizens, many of whom serve in Bahrain's security forces.

Brian Dooley, a senior adviser at Human Rights First, said Sunday's ruling "confirms there is now no tolerance for any dissent in Bahrain."

Amnesty International described the verdict as a "travesty of justice" and said Salman is being held "solely for peacefully exercising his right to freedom of expression."