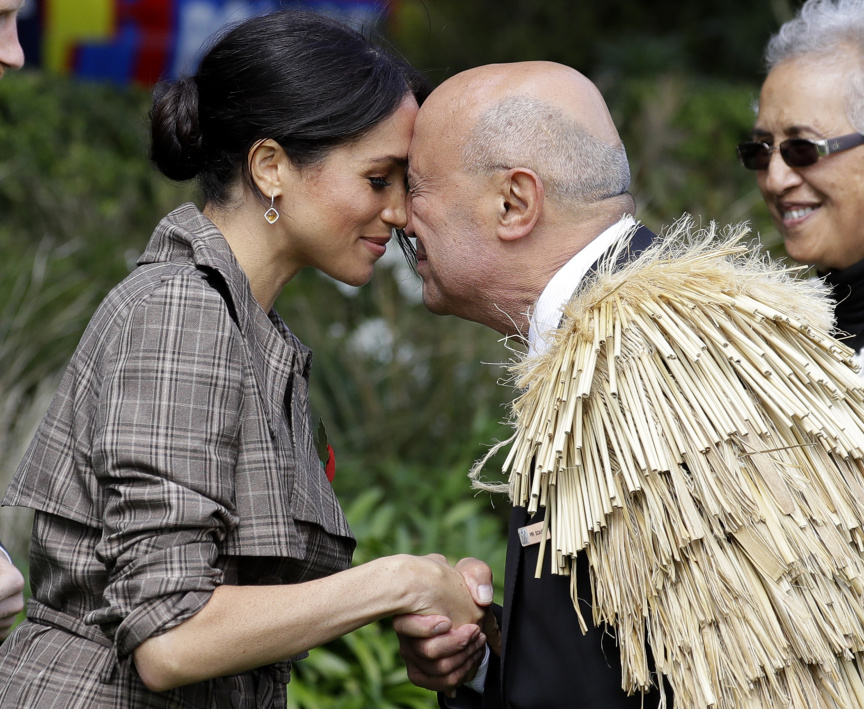 WELLINGTON, New Zealand (AP) — The Duke and Duchess of Sussex were greeted in New Zealand with a traditional Maori welcome on Sunday afternoon on the final leg of their 16-day tour of the South Pacific.

Prince Harry and wife Meghan each performed a "hongi" with indigenous Maori elders, in which they pressed noses together to share a breath. They were welcomed with traditional haka performances and a 21-gun salute at Government House in the capital, Wellington.

The couple are scheduled to spend four days in New Zealand, where they will meet with Prime Minister Jacinda Ardern, go for a trail walk in a national park, meet young people training to be part of the film industry, and visit a hatchery for the national bird, the kiwi.

At Government House, a group of children got to meet Harry and Meghan. Asked what sports they played, the kids listed them off: cricket, rugby, hockey, netball, basketball.

Nate Kearins, a 13-year-old from Kairanga School in Palmerston North, said he asked Harry if he'd heard of Steven Adams, a New Zealand-born NBA player. He said Harry had no idea, and clearly didn't know much about basketball.

Minnie Newman, an 11-year-old from Kelburn Girl Guides, said she was impressed with Meghan.

"I love her dress and she was really pretty," Newman said. "She seems really nice and kind and would be good for royalty."

Greta Crowe, 11, said she told the couple that the best part of being a girl guide was getting to meet them. She said Harry responded: "What, waiting around at Government House in the cold?" and the couple both laughed.

Hundreds of people gathered outside barriers at the Pukeahu National War Memorial, hoping to catch a glimpse of the couple on their only public walkabout in the capital.

Harry and Meghan earlier arrived on the same plane as a number of competitors returning from Sydney's Invictus Games, which Harry founded in 2014. The games give sick and injured military personnel and veterans the opportunity to compete in sports such as wheelchair basketball.

As well as Australia and New Zealand, the couple has also visited Fiji and Tonga on their tour.

'Halloween' carves up another $32 million in box office