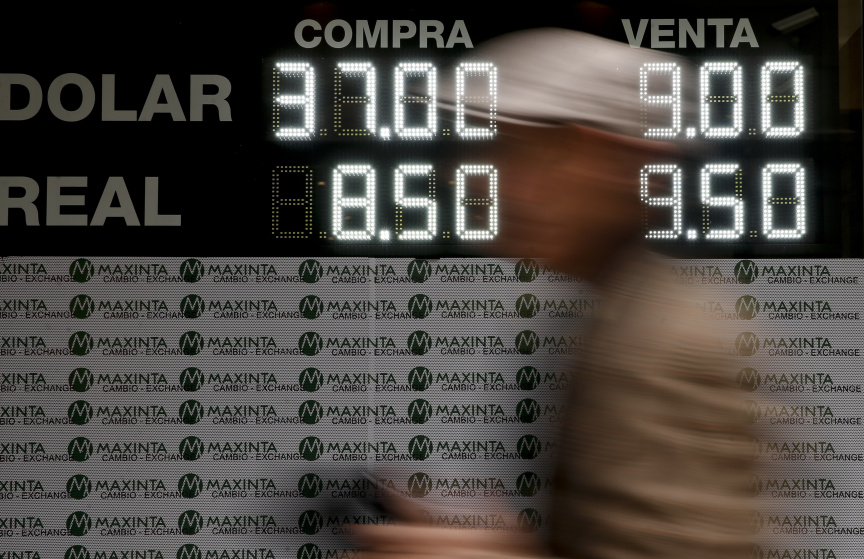 A man walks past a sign announcing the price of U.S. dollar and Brazilian real, in exchange for Argentine pesos, at an exchange house in Buenos Aires, Argentina, Monday, Sept. 3, 2018. (AP Photo/Natacha Pisarenko)

BUENOS AIRES, Argentina (AP) — Argentina's President Mauricio Macri announced new taxes on exports and the elimination of several ministries on Monday in a bid to halt economic turmoil that has sent the peso to record lows.

Macri said in a televised statement that he will also allocate more economic aid and strengthen food plans for Argentines who suffer from poverty and have been affected by skyrocketing inflation running at more than 30 percent this year.

"To start building the country we want, we have to balance our accounts with a state that spends less than what it receives," he said.

In recent weeks, the currency crisis in Argentina has intensified, forcing the government to ask for the early release of a credit line from the International Monetary Fund under a $50 billion backup financing arrangement approved earlier.

Macri, a pro-business conservative who took office in 2015, promised to trim Argentina's fiscal deficit, reduce poverty and curb inflation, but has struggled under the weight of the country's economic problems.

The latest moves come as he seeks to calm markets and restore confidence to Argentines who continue to lose purchasing power.

The peso closed at 37.4 pesos per greenback on Friday and tumbled an additional 4 percent to 39.3 pesos per dollar after the president spoke, suggesting the announcement had done little to reassure investors.

The government will now undertake a so-called 'deficit zero' plan intended to balance the budget in 2019 and staunch the currency's steep devaluation.

"These were the worst five months of my life since I was abducted," the president said, referring to the early '90s when he was kidnapped for 12 days by a criminal gang that demanded several million dollars in ransom.

He said that he will ask more of exporters because they "have more capacity to contribute" and had benefited from the devaluation.

He also acknowledged that a tax on exports is "very bad," but said that it was necessary because there was an "emergency" situation.

At a press conference later in the morning, Argentina's Economy Minister Nicolas Dujovne said that a tax of four pesos (10 cents) would be levied for each dollar of primary exports and services, and an additional tax of three pesos (7 cents) would be put on other exports.

The number of ministries will also be reduced by nearly half, although no additional details were immediately available. As part of the changes, Dujovne himself takes the reins of the Economy Ministry and the treasury department will now cease to exist.

Dujovne said austerity policies would enable the government to liquidate its fiscal deficit in 2019, allowing it to meet requirements of the financing deal with the IMF earlier than expected.

He said the government now intends to have a fiscal surplus of 1 percent of GDP in 2020.

But such measures are likely to garner pushback from farmers who already had the poorest harvest in at least a decade due to drought.

Argentina is the world's largest exporter of soy meal, and farming is the economy's main engine. High or low prices for soy and other commodities can either help sustain or bust government investment plans.

The economic situation worsened further in the first quarter of 2018 due to adverse international conditions, such as an increase in the price of oil and interest rate hikes in the United States, which lured investors to pull greenbacks out of Argentina.

Many Argentines have reacted with disdain to Macri's arrangement with the IMF, blaming the body for its role in the country's record debt default of more than $100 billion in December 2001.

Cinthia Gotlib, a lawyer, said she didn't have faith in the latest announcements.

"The truth is that every time he makes a speech, we end up worse off," she said. "The market goes crazy and the people despair because they don't know what to do, what to believe."

But Gregorio Martinez, a journalist outside of the Casa Rosada government house in Buenos Aires, said the measures are what the country needed.

"We are coming off the back of 12 years of utter destruction to this country and what we need right now is a serious path," he said. "I believe President Macri will take that path between now and 2023."

Argentina, IMF reach deal to boost financing to $57B