Halo on car protects Leclerc after crash in Belgian GP 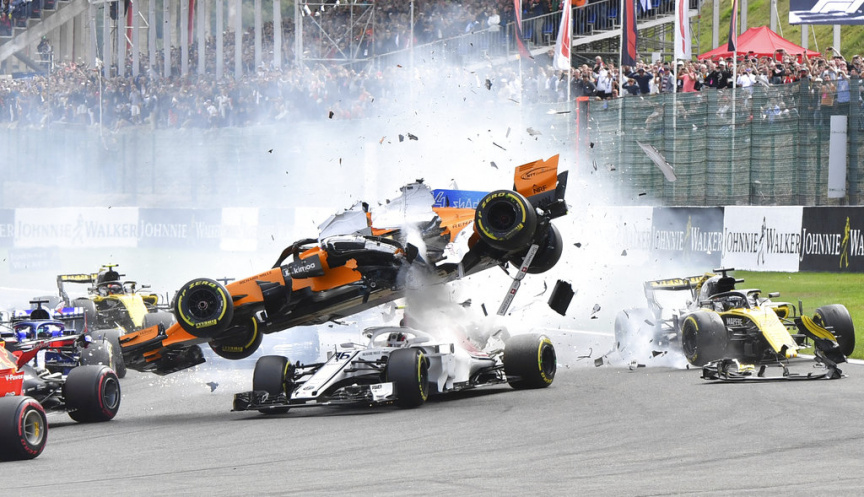 The car of Mclaren driver Fernando Alonso of Spain, center top, is involved in a crash along with Sauber driver Charles Leclerc of Monaco. center bottom, during the Belgian Formula One Grand Prix in Spa-Francorchamps, Belgium, Sunday, Aug. 26, 2018. (AP Photo/Geert Vanden Wijngaert)

Both Formula One drivers walked away unscathed, with the "halo" protective device surrounding Leclerc's cockpit appearing to save him from a serious head injury.

"I don't know how it would have ended up without it. I am happy it was there," said Leclerc, a 20-year-old driver from Monaco. "It all happened very quickly. At the time, I knew there was an orange car, I thought it was Fernando. I felt the impact, but it wasn't that big in the car. I was lucky."

Motorsport governing body FIA made the head protective device mandatory in F1 this year in order to protect drivers from potentially fatal impacts such as loose tires barreling at high speed, other flying debris and — in this case — one car landing on another.

"What is clear is the significant tire marks on the chassis and the halo," FIA race director Charlie Whiting said. "It doesn't take much imagination to think the tire marks could have actually been on Charles' head."

The FIA has been looking at ways to improve cockpit protection and limit the risk of head injuries, after French F1 driver Jules Bianchi — who was a close friend of Leclerc's — died in July 2015 and British IndyCar driver Justin Wilson died a month later.

In Sunday's crash, Leclerc's head would most likely have been hit, if not for the halo.

"(Alonso's car) would probably have made contact with his head," Whiting said.

Wickens' car flew into a fence and darted back toward the exposed head of another driver, Ryan Hunter-Reay — who ducked down and escaped unharmed.

Video footage from Hunter-Reay's in-car camera provided a terrifying glimpse at just how close Wickens' car came to striking Hunter-Reay's head in what would have almost surely been a fatal blow.

Whiting says the FIA is sharing all of its halo information with IndyCar.

"We are talking to them," he said.

Alonso, who was sent airborne by Nico Hulkenberg's Renault ploughing into the back of his car, was thankful no one was harmed.

"On the positive side we are all OK, with Charles, with the halo. It's good news all three of us are OK," Alonso told television broadcaster Sky. "It's good proof (for the halo). We didn't need any proof, but it's a good thing."

The halo forms a semi-circular barrier around the driver's helmet in the front half of the cockpit, protecting the head without completely closing the cockpit. When first tested ahead of 2016, drivers were split as to whether they liked it with some — such as four-time F1 champion Lewis Hamilton — criticizing it on aesthetic grounds.

Others, like two-time F1 champion Alonso and four-time champion Sebastian Vettel were outspoken in backing its usage.

Former F1 champion Nico Rosberg tweeted: "We can end the HALO discussion now. It will save lives."

Bianchi and Leclerc were childhood friends. Bianchi grew up in Nice, Leclerc in nearby Monaco, and their fathers were firm friends. Bianchi died at the age of 25, several months after massive head injuries sustained at the Japanese GP in October 2014.

Bianchi's accident at Suzuka occurred at the end of the race in rainy, gloomy conditions, when his Marussia team car slid off the track and ploughed into a crane picking up the Sauber of German driver Adrian Sutil, who had crashed at the same spot one lap earlier.

Wilson died in August 2015, a day after being hit on the helmet by debris from another car at Pocono Raceway. In 2011, British IndyCar driver Dan Wheldon died of a head injury at Las Vegas when his car flipped cockpit-first into the fence and his head struck a pole.