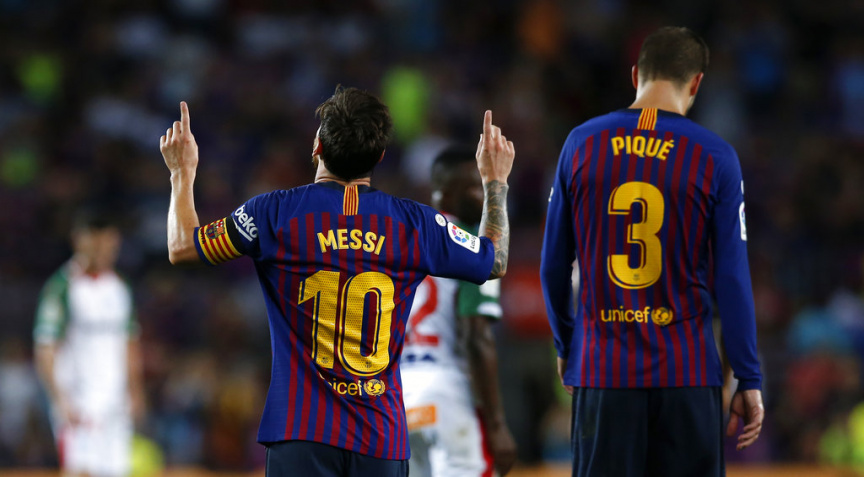 Lionel Messi started the Spanish league right where he left off last season, and that's not a good sign for Real Madrid's weakened squad.

Madrid doesn't have Cristiano Ronaldo to try to match Messi's achievements for the first time in nearly a decade, and dethroning the defending league champions will be that much harder if the Argentine playmaker dominates again.

Messi, the league's top scorer last season, opened this year's campaign by scoring two goals in the team's 3-0 win over Alaves at Camp Nou on Saturday. His first goal was a clever free-kick shot underneath the wall, breaking the game open after Barcelona had struggled to get past the Alaves defense.

Substitute Philippe Coutinho added to the lead late in the game and Messi closed the scoring in injury time.

Madrid was likely feeling Ronaldo's absence off the field as well, as a relatively small crowd of 48,446 was at the Bernabeu for Sunday's 10:15 p.m. start (local time), marking the team's worst attendance since before Ronaldo arrived in 2009, according to Spanish media.

With Ronaldo gone to Juventus, Gareth Bale has been gaining a more prominent role with Real Madrid. And he got off to a good start by playing well in the team's league opener against Getafe.

Bale scored and helped set up Dani Carvajal's goal in the 2-0 win in the Madrid derby at Santiago Bernabeu Stadium. He also struck the crossbar with a first-half header.

"Bale had a very good match," Madrid coach Julen Lopetegui said. "He gives us many solutions."

It is the third straight season Bale has scored in Madrid's opener in the Spanish league.

He hadn't had many chances as a starter under coach Zinedine Zidane, who quit before Ronaldo departed in the offseason.

Lopetegui has been keeping Keylor Navas in goal despite the signing of star goalkeeper Thibaut Courtois. Navas was the starter when Madrid won its last three Champions League titles.

The Spanish league has introduced the video assistant referees, leaving the English Premier League as the only leading domestic competition in Europe without the review technology. On VAR's first weekend in Spain, it was used twice in Sevilla's 4-1 win at promoted Rayo Vallecano on Sunday.

It awarded Sevilla a goal that had been initially disallowed because of offside, and gave Rayo a penalty kick after a foul that had been originally called outside the area.

To get fans familiarized to it, pamphlets explaining how the system is supposed to be used were distributed before some matches. The VAR was also explained by an announcer before Real Madrid's match against Getafe at the Santiago Bernabeu Stadium.

"We will get used to is," Atletico Madrid coach Diego Simeone said.

Huesca — which had never played in the first division — had the best start among the promoted clubs, winning 2-1 at Eibar.

Valladolid earned a good draw at Girona on Friday, while Rayo Vallecano lost 4-1 at home to Sevilla on Sunday.

Valladolid and Rayo had been regulars in the top flight in the past, but not Huesca, the small club based in northeastern Spain.

Huesca had played a total of only eight seasons in the second division before earning its promotion last season.

Messi’s back: Spanish league set to resume in June