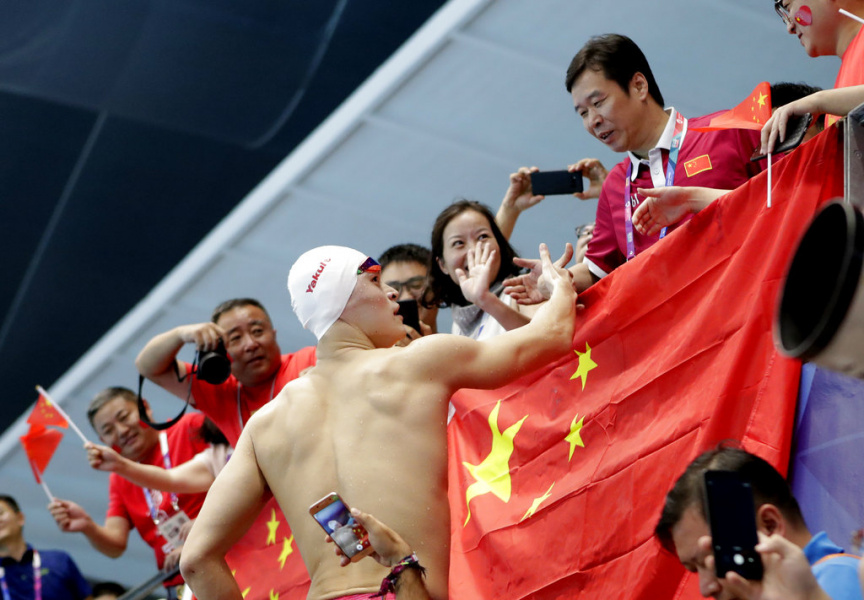 JAKARTA, Indonesia (AP) — Sun Yang thought he'd seen it all in his glittering swimming career. That was until Sunday's opening night of swimming finals at the Asian Games.

In an embarrassing technical blunder for games organizers, the flag hoist collapsed during the playing of the Chinese national anthem as Sun stood atop the podium after winning the 200-meter freestyle final.

Officials picked the flags up off the pool deck and hastily reattached them to the broken metal hoist but were unable to raise them again while the anthem was played for a second time, to the bemusement of Sun and spectators watching in the stands.

Diplomatically, Sun played down the incident when quizzed by reporters, saying he was just relieved to finally win the 200 freestyle title which had eluded him in the two previous editions of the Asian Games.

Even though he is the reigning Olympic and world champion, Sun had never won the four-lap race at the Asian games, finishing runner-up to South Korea's Park Tae-hwan in 2010 and second again to Japan's Kosuke Hagino four years ago.

"I've waited eight years for this title," Sun said. "It also gives me a golden grand slam of Olympic, world and Asian titles. It's a perfect result, a dream. It's unbelievable."

Officials held the flags up in their hands for the subsequent medal ceremony before locating a replacement hoist for the remaining presentations. By the end of the night, China edged Japan 4-3 in the first seven finals decided.

He was outside his best but with a busy program the 26-year-old did enough to win comfortably and celebrated in animated fashion, clenching his fists and punching the air in delight.

He reached the wall in 52.34 to equal the games record and deny Japan's Ryosuke Irie a third straight win in the event.

China won the first golds decided in the pool but Japan hit back by winning the next three, setting the stage for an intense six-day contest to determine Asia's top swimming nation in the lead up to the 2020 Tokyo Olympics.

Satomi Suzuki secured her first major title when she broke the games record to win the 100 breaststroke in 1:06.40, and Daiya Seto retained his 200 butterfly crown in a time of 1:54.53 after trailing for the first three laps.

"I got a bit frantic in the last 25 meters, but I got the job done," he said. "It gives me a lot more confidence going into next year's world championships and the 2020 Tokyo Olympics."

Japan finished off the night with yet another games record to win the women's 4x100 freestyle relay.

20 killed, 70 hurt in protests in Indonesia