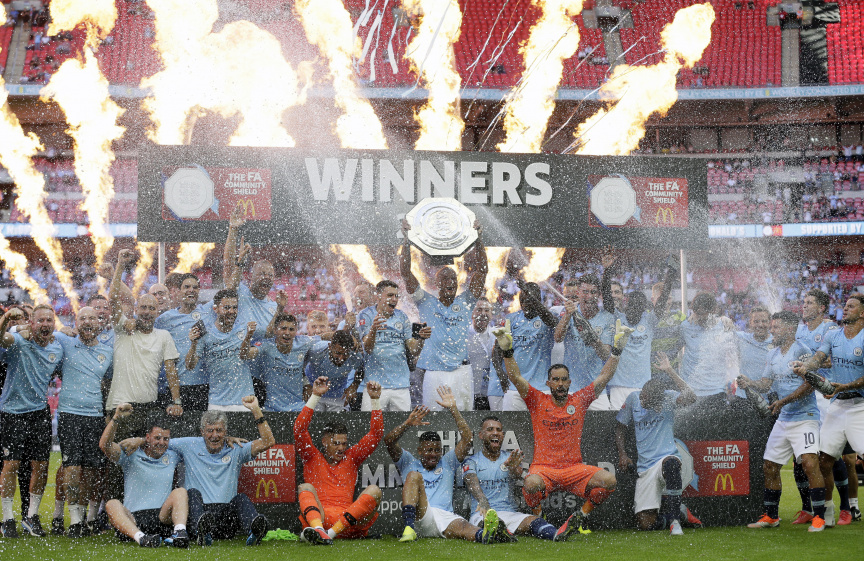 LONDON (AP) — Despite the tight turnaround after the World Cup, Manchester City's attacking ruthlessness has not been blunted by fatigue or the English heatwave. Winning the Community Shield demonstrated that beyond any doubt on Sunday.

Three weeks after the World Cup finished, the Premier League champions opened the new season by collecting more silverware. Sergio Aguero scored twice — once in each half for his record-extending 200th and 201st goals for City — as FA Cup holder Chelsea was beaten 2-0 in the traditional curtain raiser to the English season at Wembley Stadium.

"The heat today was so tough," City manager Pep Guardiola said. "So demanding."

While it has been a summer of continuity at City after a record 100-point Premier League haul, Chelsea has gone through more turmoil in recent weeks.

"Our preseason until now has been crazy," Chelsea manager Maurizio Sarri said. "So we have to work."

The former Napoli coach has had only a couple of weeks to work on his new Chelsea squad after the protracted firing of Antonio Conte, abandoning his fellow Italian's preferred 3-4-2-1 formation for 4-3-3.

Although Conte won the FA Cup at Wembley in May, he paid the price for Chelsea's slump from league winners to fifth place, leaving the 2012 Champions League winners out of Europe's elite competition this year. City finished 30 points ahead of Chelsea.

AGUERO AT THE DOUBLE

City had already wrapped up its third Premier League title in six years when Aguero underwent surgery on his left knee in April. The striker was fit for the World Cup, but Argentina was eliminated in the round of 16, ensuring he left Russia two weeks before the tournament ended.

"He arrived (back at City) so sharp, so good," Guardiola said. "With him and Gabriel (Jesus) we are good in that position."

Aguero's second goal against Chelsea completed a counterattack in the 58th minute. John Stones gained possession inside his own half, Ilkay Gundogan advanced with the ball and Bernardo Silva then threaded a pass through to Aguero, who netted his 201st goal.

Although England missed out on World Cup glory in Russia — losing in the semifinals to Croatia — the country still did win a World Cup in the last year. Two of the 2017 under-17 world champions are finally getting game time with their clubs and seized their opportunities at the national stadium.

When Chelsea did threaten City's goal it often owed much to winger Callum Hudson-Odoi creating danger on the left flank. And midfielder Phil Foden helped to create City's opener, surging forward in the 13th minute before squaring for Aguero, who struck into the bottom corner.

"Now he is more mature and he is part of the first team," Guardiola said of the 18-year-old Foden. "It's good because he is a Manchester City fan and people love him."

Resolving the managerial situation hasn't ended uncertainty around Chelsea. Both goalkeeper Thibaut Courtois and midfielder Eden Hazard are still on their breaks after helping Belgium to finish third at the World Cup. It's unclear if they will play for Chelsea again, with the duo linked with moves to Real Madrid.

Courtois' agent was quoted as saying over the weekend that the goalkeeper, who was sent to Atletico Madrid on loan for three years, now wants to move back to the Spanish capital to be close to his children.

Sarri wants to hear the message directly from Courtois.

"I am not interested in the agent," Sarri said. "If Courtois will tomorrow tell me the same, I will have to speak to my club of course. I want only players with a high level of motivations. I have (nothing) to answer to the agent."

Premier League clubs have until Thursday to sign players after the close of the transfer window was brought forward to before the season opens. The summer trading period for most European leagues still closes on Aug. 31 as usual.

City has already broken its transfer record, signing Riyad Mahrez last month for 60 million pounds (then $80 million). The former Leicester winger played 68 minutes against Chelsea but will take time to settle in the side.

Chelsea opens its campaign at Huddersfield on Saturday, and City is back in London next Sunday to face Unai Emery's Arsenal.