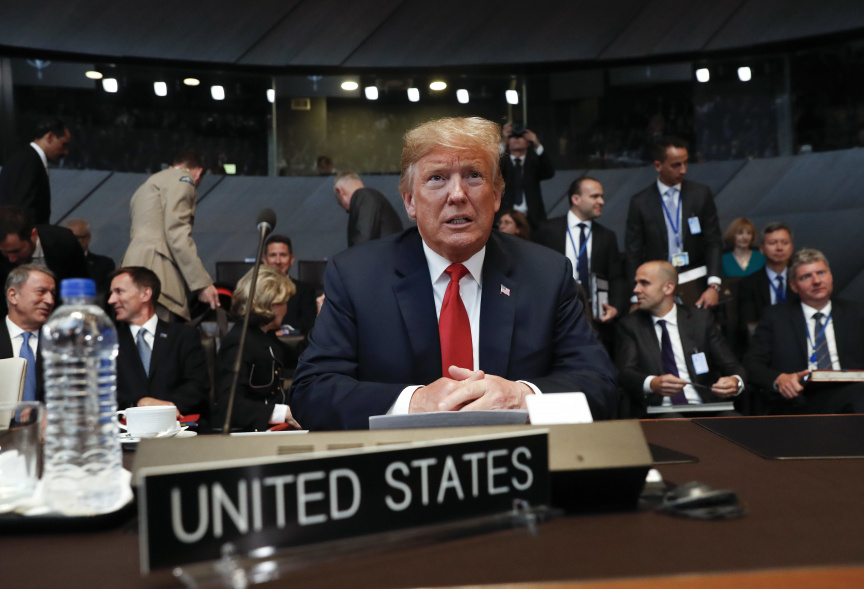 BRUSSELS (AP) — President Donald Trump tore into this week's NATO summit questioning the value of a military alliance that has defined decades of American foreign policy, torching an ally and proposing a massive increase in European defense spending.

Under fire for his warm embrace of Russia's Vladimir Putin, Trump on Wednesday turned a harsh spotlight on Germany's own ties to Russia, declaring that a natural gas pipeline venture with Moscow has left Angela Merkel's government "totally controlled" and "captive" to Russia.

The attack against a core ally comes just days before Trump is set to meet one-on-one with Putin. With scorching language, Trump questioned the necessity of the alliance that formed a bulwark against Soviet aggression, tweeting after a day of contentious meetings: "What good is NATO if Germany is paying Russia billions of dollars for gas and energy?"

He demanded via tweet that members "Must pay 2% of GDP IMMEDIATELY, not by 2025" and then rattled them further by privately suggesting member nations should spend 4 percent of their gross domestic product on defense — a bigger share than even the United States currently pays, according to NATO statistics.

It was the most recent in a series of demands and insults that critics fear will undermine a decades-old alliance launched to counterbalance Soviet aggressions. And it comes just days before Trump sits down with Putin in Finland at the conclusion of his closely watched European trip.

Trump has spent weeks berating members of the alliance for failing to spend enough of their money on defense, accusing Europe of freeloading off the U.S. and raising doubts about whether he would come to members' defense if they were ever attacked.

He described the current situation as "disproportionate and not fair to the taxpayers of the United States."

However, a formal summit declaration issued by the NATO leaders Wednesday reaffirmed their "unwavering commitment" to the 2 percent pledge set in 2014 and made no reference to any effort to get to 4 percent.

Merkel, who grew up in communist East Germany, shot back that she had "experienced myself a part of Germany controlled by the Soviet Union, and I'm very happy today that we are united in freedom as the Federal Republic of Germany and can thus say that we can determine our own policies and make our own decisions and that's very good."

Amid the tumult, British Prime Minister Theresa May sounded a call for solidarity among the allies, saying, "As we engage Russia we must do so from a position of unity and strength - holding out hope for a better future, but also clear and unwavering on where Russia needs to change its behavior for this to become a reality. And, as long as Russia persists in its efforts to undermine our interests and values, we must continue to deter and counter them."

From Brussels, Trump heads to England, where May's government is in turmoil over her plans for exiting the European Union.

Although administration officials point to the long-standing alliance between the United States and the United Kingdom, Trump's itinerary will largely keep him out of central London, where significant protests are expected. Instead, a series of events — a black-tie dinner with business leaders, a meeting with May and an audience with Queen Elizabeth II — will happen outside the bustling city, where Mayor Sadiq Khan has been in a verbal battle with Trump.

Demonstrators mock Trump; protest his visit to the UK