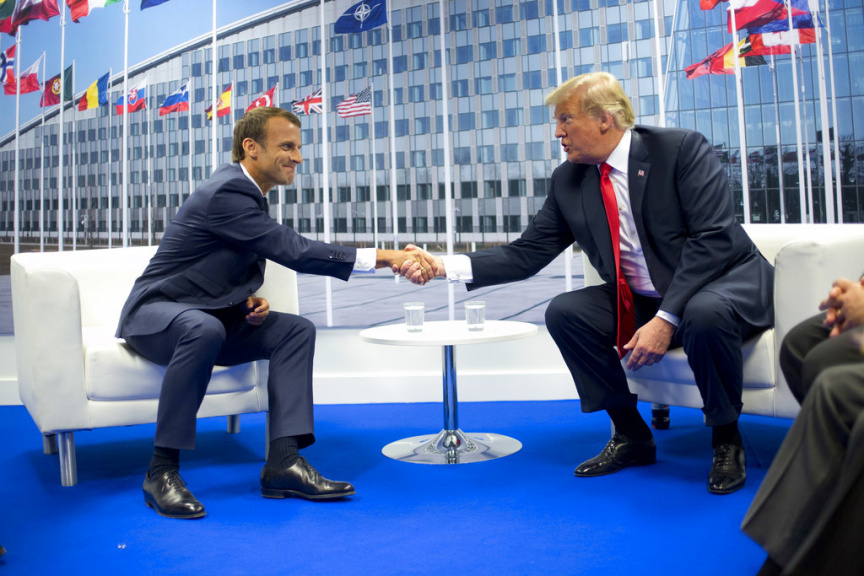 House Speaker Paul Ryan is defending NATO as "indispensable" after President Donald Trump roiled a gathering of the alliance by sharply criticizing Germany.

The Wisconsin Republican says Trump is right to push NATO members to meet their obligations. But he adds that the military alliance is "as important today as it ever has been."

Trump lashed out at German Chancellor Angela Merkel at a summit in Brussels. He claims that Germany is "totally controlled" by and "captive to Russia" because of an oil and gas pipeline.

Ryan was asked if he agreed with Trump about that, and said he believes lawmakers should not criticize the president when he is overseas.

Hatch met with German Chancellor Angela Merkel when he traveled to Berlin last week. In Washington on Wednesday, he says: "I have the highest opinion of her. I think she's one of the great leaders of this world."

Trump was openly critical of Germany as a NATO summit opened in Brussels, objecting to a pipeline that would bring Russian natural gas directly to Germany and calling on the NATO ally to increase its spending on defense.

French President Emmanuel Macron says he disagrees with President Donald Trump's assessment that Germany is "totally controlled" by Russia because of an oil pipeline.

Macron was asked about Trump's assertion Wednesday as the leaders sat down for talks while both are attending a NATO summit in Brussels.

Trump has been hammering France and other European countries over their defense spending, as well as over trade deals he says are unfair to the U.S.

But Trump told reporters in the room for part of the meeting that he and Macron have a "tremendous relationship" and that it was an "honor to be with a friend of mine." He added that "hopefully in the end it will all work out."

President Donald Trump and German Chancellor Angela Merkel have met after the U.S. leader publicly lambasted the longtime ally over its spending on national defense and a Russian oil pipeline.

Sitting down in Brussels, where both are attending a NATO summit, Trump described it as a "great meeting."

He says they discussed defense investment and trade, adding: "We have a tremendous relationship with Germany."

Merkel said she raised issues of migration and economic development with Trump.

Trump asserted earlier Wednesday that Germany is "totally controlled" by and "captive to Russia" because of a pipeline project. Trump told reporters that the pair discussed the pipeline during their meeting. He did not elaborate.

U.S. first lady Melania Trump is visiting a music academy near the Belgian capital as her spouse and other world leaders attend a NATO summit.

Trump, who is accompanying President Donald Trump on a weeklong trip to Europe, stopped Wednesday at the Queen Elisabeth Music Chapel in Waterloo, near Brussels.

The 48-year-old Trump wore a navy blue Calvin Klein calf-length dress with white and green detail on the lapel and white Louboutin heels with their trademark red soles.

The spouses were welcomed to the music center by Amelie Derbaudrenghien, the partner of Belgian Prime Minister Charles Michel, and Ingrid Schulerud, the wife of NATO Secretary-General Jens Stoltenberg. They toured the center and attended a piano and violin concert.

Other participating first ladies include Brigitte Macron of France and Emine Erdogan of Turkey.

President Donald Trump says he's thinking about American farmers even as he meets with NATO allies in Brussels.

Trump says in a two-part tweet Wednesday that he's "in Brussels, but always thinking about our farmers."

But Trump says "Farmers have done poorly for 15 years" and blames "Other countries' trade barriers and tariffs" for "destroying their businesses." He's pledging to open "things up, better than ever before" but says "it can't go too quickly."

Trump says "I am fighting for a level playing field for our farmers, and will win!"

The tweet came as Trump attended a closed-door meeting of the North Atlantic Council. Staffers often send tweets for the president.

President Donald Trump is participating in a welcome ceremony with fellow NATO leaders at what's expected to be a fraught meeting of the military alliance.

But he appeared to steer clear of German Chancellor Angela Merkel hours after claiming her country was controlled by Russia. He also walked far behind the leaders of the U.K. and Canada during a walking tour of NATO headquarters.

NATO Secretary General Jens Stoltenberg (yehnz STOHL'-tehn-burg) is stressing the need for the allies to stick together, saying, "We owe our success to our unity."

President Donald Trump is set to meet Wednesday with German Chancellor Angela Merkel, hours after he publicly claimed that the longtime U.S. ally is "totally controlled" by and "captive to Russia."

White House press secretary Sarah Sanders says Trump will reiterate his public criticism of Merkel during their pull-aside on the margins of the NATO summit in Brussels.

Trump fumed during a Wednesday meeting with NATO Secretary-General Jens Stoltenberg that a Russian natural gas pipeline project in Germany is "very inappropriate" as he criticized European countries' contributions to the mutual-defense alliance.

Buckingham Palace says Queen Elizabeth II will welcome President Donald Trump and his wife Melania at Windsor Castle where they will watch a military march before having tea on Friday.

The palace said Wednesday the president will be greeted by an honor guard formed of the Coldstream Guards and will receive a royal salute before the U.S. national anthem is played.

Trump and the queen will review the honor guard before watching a military parade. Trump and his wife will then have tea with the queen inside the castle.

The palace did not specify if the queen's husband Prince Philip would attend. The 97-year-old Philip has retired from public duties but sometimes appears in public with the queen.

The visit is part of Trump's first trip to Britain since becoming president.

President Donald Trump is asserting that Germany is "totally controlled" by and "captive to Russia" over a pipeline project during a testy breakfast with NATO Secretary-General Jens Stoltenberg (yehnz STOHL'-tehn-burg).

Trump is taking issue with the U.S. protecting Germany when the European nation is making energy deals with Russia.

The president appeared to be referring to the Nord Stream 2 pipeline that would double the amount of gas Russia can send directly to Germany, skirting transit countries such as Ukraine. The project is opposed by the U.S. and some other EU members.

Trump says of Germany: "We're supposed to protect you against Russia" and yet you make this deal with Russia.

Stoltenberg pushed back, stressing that NATO members have been able to work together despite their differences.

President Donald Trump is pressing NATO allies to bolster their defense spending as he opens talks with leaders of the military alliance. Trump says the disproportionate defense spending an "unfair burden on the United States."

Trump says at the start of his meeting with NATO Secretary-General Jens Stoltenberg that "because of me" NATO has raised more than $40 billion in defense spending.

Trump says, "So I think the secretary general likes Trump. He may be the only one but that's OK with me."

The U.S. president has called upon NATO allies to meet commitments to spend 2 percent of their GDP on defense.

Stoltenberg says "a strong NATO is good for Europe."

President Donald Trump is meeting with NATO Secretary-General Jens Stoltenberg (yehnz STOHL'-tehn-burg) at the start of a summit of the military alliance.

Trump is expected to continue questioning wary NATO allies about their military spending during talks in Brussels.

He tweeted en route from Washington that European counties "want us to happily defend them through NATO, and nicely pay for it. Just doesn't work!"

Trump's day will include a welcome ceremony, a meeting of the North Atlantic Council and a working dinner with some of the same leaders he berated over trade during his last world leaders' summit in Canada last month.

Brussels is the first stop of a weeklong European tour that will include stops in the United Kingdom and a meeting in Helsinki with Russia's Vladimir Putin.