Trump's attacks on NATO raise questions about its future 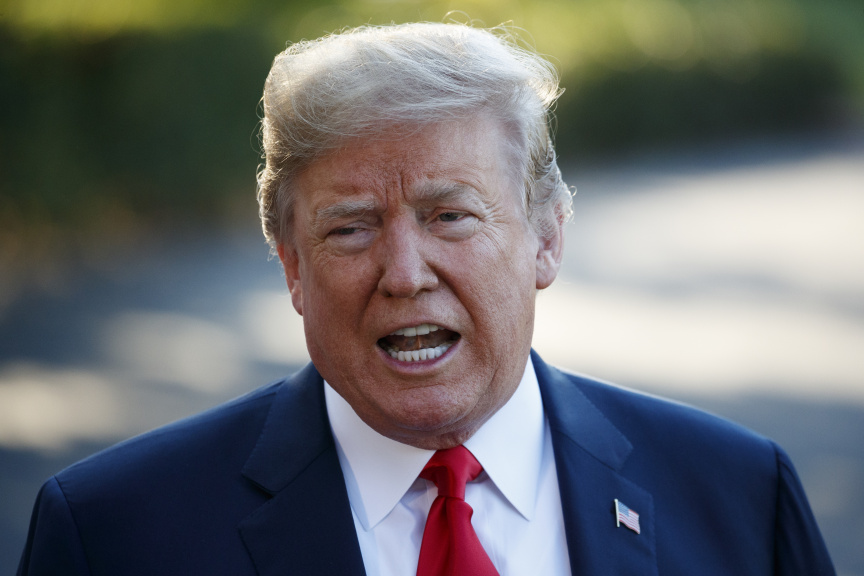 President Donald Trump speaks with reporters before boarding Marine One on the South Lawn of the White House, Tuesday, July 10, 2018, in Washington. (AP Photo/Evan Vucci)

WASHINGTON (AP) — President Donald Trump's repeated tongue lashings of NATO allies and his friendly overtures to Russian President Vladimir Putin are stirring questions at home and abroad about Trump's commitment to an Atlantic alliance that has been a pillar of U.S. security policy for more than half a century.

Might a reordering, or even a reduction, of U.S. forces in Europe be in the cards? Clues may come when Trump gathers Wednesday with NATO leaders in Brussels. The official agenda includes a plan for increasing the number of land, air and sea forces capable of reacting quickly in a European crisis, but overshadowing it are tensions generated by Trump's view that the Europeans are slackers leaning unfairly on the U.S. military.

At the risk of deepening the rift with traditional allies, Trump will then hold a summit in Finland with Putin. On his departure from Washington on Tuesday, the president remarked that he "can't say right now" if Putin is a friend or foe, but he predicted that his first summit with the Russian leader "may be the easiest" of all his meetings in Europe.

Such comments have stirred unease not just in Europe, but in Washington. A bipartisan resolution, set to be endorsed by the Senate Foreign Relations Committee on Tuesday, pointedly voices support for NATO as strategically important for the collective security of the trans-Atlantic region.

"Although the Atlantic alliance has weathered many crises over its lifetime, I now am concerned that the alliance will not survive Donald Trump," said Elizabeth Sherwood-Randall, who served as senior director for European affairs on the National Security Council during President Barack Obama's first term.

"Because he isn't arguing with allies about policy. He's questioning the fundamental value of NATO to the United States. This antagonistic approach is generating an unprecedented debate in Europe and in Canada about whether the United States should be treated as friend or foe," she said.

The demise of the Soviet Union in 1991 prompted a partial drawdown of U.S. forces from Europe, but every administration since then has concluded that keeping a U.S. military presence there was important for wider U.S. security, political and economic interests, and as a sign of solidarity with Europe. NATO has been a key part of the long U.S. military involvement in Afghanistan, for example, and it is expected to agree this week to take a bigger training role in Iraq.

Trump, who has also questioned the U.S. military presence in Asia, is challenging those assumptions. That has been most plain in his antagonistic approach to Germany, the main host of U.S. forces in Europe. He has criticized the Germans for not spending enough on their own defense and has castigated the country for what he calls an overly liberal immigration policy. He also has placed Germany at the center of his complaints about a U.S.-European trade imbalance.

Derek Chollet, executive vice president of the German Marshall Fund of the United States, a think tank, says there is a clear connection between Trump's criticism of German defense spending and reports that the Pentagon has undertaken a review of the cost of keeping troops in Europe.

"You cannot read this any other way" than looking at whether a U.S. troop reduction "is a feasible option for punishing them for their apparent lack of will," said Chollet, who was the Pentagon's assistant secretary for international security affairs during Obama's second term.

He questions whether Trump fully understands the global significance of the U.S. military presence in Germany, including its hosting of the headquarters of U.S. Africa Command, which leads U.S. counterterrorism efforts in North Africa. Stuttgart also is headquarters for U.S. European Command. Among many other facilities, Germany hosts a U.S. military hospital at Landstuhl, the largest American hospital outside the United States.

In addition, NATO has proposed creating a new command in Germany to improve the way the alliance would move troops and equipment in a military crisis. Kay Bailey Hutchison, the U.S. ambassador to NATO, told reporters this plan will be approved at the Brussels summit.

Notwithstanding Trump's grumbles about America shouldering the defense burden of Europe, his administration plans to boost spending to support it.

In the aftermath of Russia's annexation of the Crimea region of Ukraine in 2014 and its subsequent military incursion into eastern Ukraine, the Pentagon ramped up joint exercises in eastern and central Europe and spent billions on what it calls the European Deterrence Initiative aimed at Russia. After spending $3.4 billion on that initiative last year, the Trump administration has proposed boosting it to $6.5 billion in the 2019 budget year.

Trump's Pentagon chief Jim Mattis is a former NATO commander and a leading advocate for sustaining the alliance, although he also has been pressuring allies to spend more on defense. Some of Mattis' predecessors were even stronger in their criticisms. Robert Gates, for example, said in Brussels in 2011 that European penny-pinching and distaste for front-line combat in Afghanistan was putting the future of the alliance at risk. Gates said NATO faced a "dim if not dismal" future, not least because of what he called a diminishing patience in Congress for spending on Europe's defense.

Trump, however, has taken this a step further by asserting that the Europeans are freeloaders taking advantage of American generosity.

In a new assessment of the NATO spending and burden-sharing issues, the Center for Strategic and International Studies called Trump's language "uniquely divisive" and said NATO members' contributions should be measured by more than simple budget numbers. The think tank was referring to the pledge at NATO's 2014 summit meeting that members would "aim to move toward" spending at least 2 percent of gross domestic product on defense by 2024. By its count, only four of NATO's 29 member countries met the 2 percent goal in 2017. They were the U.S., Greece, Britain and Estonia.

The report said a wider range of metrics should be used to measure an ally's contributions to collective defense. It cited as an example Denmark, which has not met the 2 percent goal in recent years but has made important contributions in other ways, including with troop deployments to Afghanistan and by sacrificing significant trade with Russia by complying with sanctions.