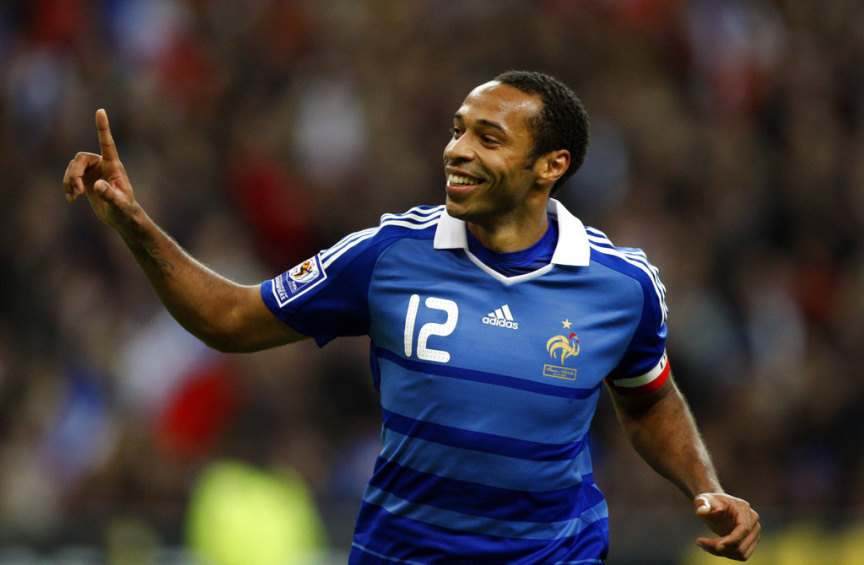 FILE - In this Wednesday Oct. 14, 2009 file photo, France's Captain Thierry Henry celebrates after scoring a penalty against Austria during their World Cup 2010 qualifying soccer match at Stade de France, in Saint Denis, north outskirts of Paris, France. Kylian Mbappe and Thierry Henry are seemingly linked by destiny. While Henry is France's leading scorer with 51 goals and among the greatest forwards of the modern era, the 19-year-old Mbappe is the new French sensation tipped to become perhaps even the world's best. (AP Photo/Francois Mori, file)

MOSCOW (AP) — If only France's young players had an outstanding ex-pro they could turn to for advice about how to beat Belgium in the World Cup semifinals, someone who won the World Cup himself in 1998 and who scored more goals than anyone in his stellar career with Les Bleus.

Not only is Thierry Henry already taken but the team that hired France's record scorer as an assistant coach is, yes, you guessed it ... Belgium.

France striker Olivier Giroud is turning Henry's presence on the opposing side into an extra source of motivation for Tuesday's semifinal, which is France's first since 2006 and only the second ever for Belgium.

"I would be proud to show Titi that he chose the wrong camp," Giroud said Sunday, referring to Henry by his nickname. "It is true that it is strange to have him against us for this match. I think it will be a peculiar match for him. As long as we win, that's fine with me."

Henry was part of the 1998 team that won the World Cup on home turf, scoring three goals in his first major tournament and converting a penalty in a nerve-rattling shootout against Italy in the quarterfinals. Henry did not play in the 3-0 final victory for Les Bleus over Brazil.

Belgium coach Roberto Martinez brought Henry into the Belgium setup two years ago to impart not just his knowledge of goal scoring — he is France's all-time top scorer with 51 goals in 123 appearances, and Arsenal's with 228 — but also his experience of winning with a team weighed down by great expectations.

Giroud said Henry could coach France in the future and that working with Belgium will help the 40-year-old gain experience in his new career as a coach.

"He is lucky to be with a team with a fine generation of players. He is there to learn," Giroud said. "I would have preferred that he was with us and that he was giving his advice to me or to the other attackers. But we mustn't be jealous or anything about that. It doesn't shock me at all."

Previously, as a TV pundit, Henry suggested Giroud wasn't good enough, saying in 2015 that Arsenal couldn't win the Premier League with him in attack and needed "a top, top-quality striker."

Giroud, now with Chelsea, says he bears no hard feelings.

For TV work, Henry "needed to be a bit incisive," he said. "I am not at all bitter about that."

"It's been a few years now that he said certain things in the media before going back on his words or at least changing them," Giroud said. "There is a lot of respect between us."