Thais work to salvage sunken boat; search on for 14 missing 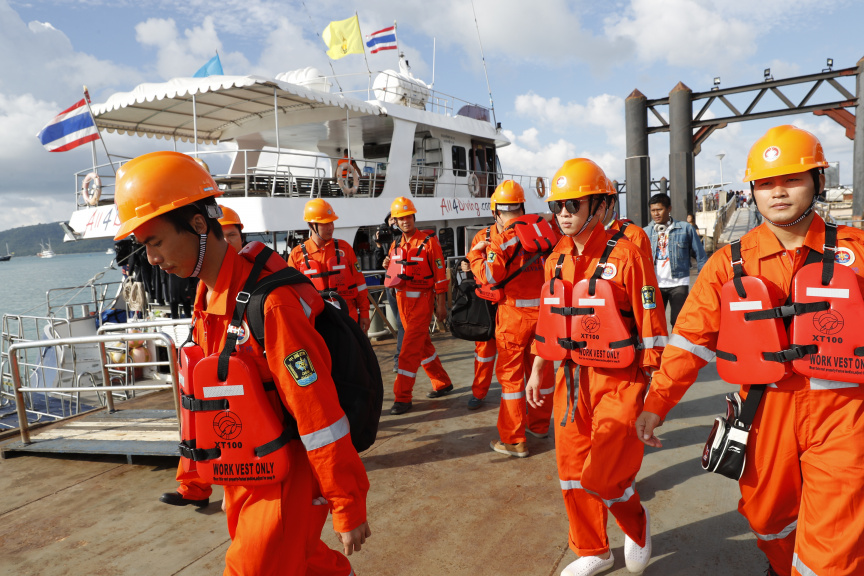 Chinese rescue team arrive at Chalong pier in Phuket in Phuket, Thailand, Sunday, July 8, 2018. The death toll from Thursday's tragedy climbed to dozens, in Thailand's biggest tourist-related disaster in years. It was not clear how many of the dead and missing were Chinese. (AP Photo/Vincent Thian)

PHUKET, Thailand (AP) — Thai authorities on Sunday began operations to salvage a tour boat that sank in a storm off the southern resort island of Phuket, killing 41 people, as they search for another 14 missing tourists, most of them Chinese.

French diver Laurent Couleau said that a pair of legs were seen dangling from beneath the hull when he and other divers entered the wreck of the double-decker Phoenix on Saturday.

He said authorities were lifting the boat up to shore in a bid to retrieve the body.

A navy official, Rear Adm. Charoenpol Kumrasri, told reporters that there were no more bodies inside the wreck. He said divers will continue to search areas surrounding the site while helicopters will scour the sea for the missing.

Police have said they may file negligence charges soon against the captain of the boat.

Chinese President Xi Jinping has called for all-out search and rescue efforts, telling the Ministry of Foreign Affairs and Chinese diplomats in Thailand to take greater measures, and also urging Thai authorities to spare no efforts.

Many of the victims had been on group tours, booked in Phuket and China.

4 rescued from Thai cave; 9 remain inside