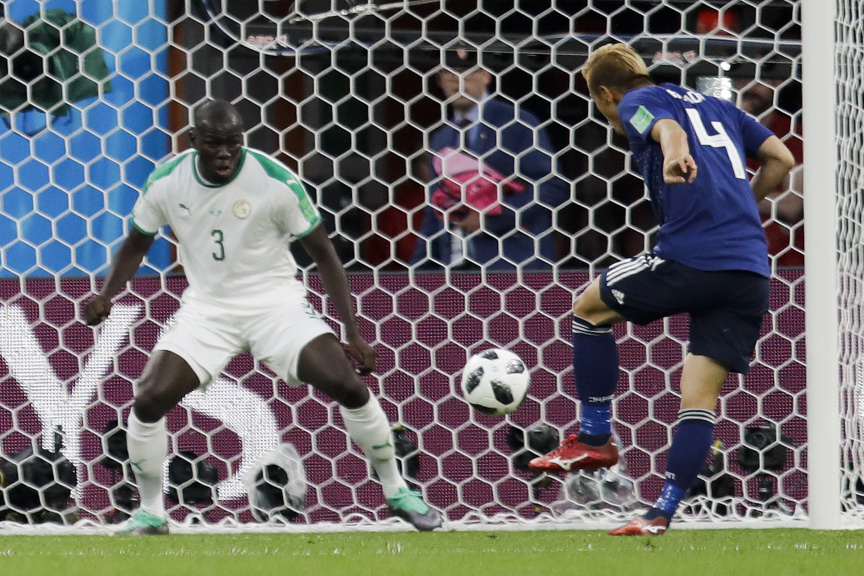 Colombia's Radamel Falcao, right, celebrates after scoring the second side goal past Poland goalkeeper Wojciech Szczesny during the group H match between Poland and Colombia at the 2018 soccer World Cup at the Kazan Arena in Kazan, Russia, Sunday, June 24, 2018. (AP Photo/Frank Augstein)

Falcao missed the tournament in Brazil with a knee injury and had to wait until arriving in Russia to score his first World Cup goal. It came in Colombia's 3-0 victory over Poland on Sunday.

"It's a dream goal," Falcao said. "I'm happy for the victory, for the team's performance and the goal that I scored, which I've been waiting for for many years."

The victory kept Colombia in the running for a spot in the round of 16 and knocked out Poland, the first European country to be eliminated.

Falcao, Colombia's all-time leading scorer with 30 goals, made sure he would stay healthy for this year's World Cup by sitting out several matches with his Monaco club this season.

"We always hope that he can score and hope that he can be fit as he was today, and we want to help him," Colombia coach Jose Pekerman said. "I think the fact that he scored was very important, not just for today but for the matches to come.

Playing some scintillating soccer in Kazan, Falcao scored with the outside of his foot in the 70th minute after a superb pass from playmaker Juan Quintero in the back of the defense.

Yerry Mina scored the first goal in the 40th and Juan Cuadrado completed the win in the 75th.

Both teams lost their Group H openers and knew another loss would end their hopes of advancing. Colombia will next face Senegal on Thursday in Samara with a chance to win the group, while Poland will play Japan in Volgograd.

Senegal and Japan drew 2-2 earlier Sunday and lead the group with four points each.

Mina out-jumped the Poland defense to head in the opening goal from James Rodriguez's cross, rewarding a spell of domination by the Colombians.

Rodriguez's through ball after Poland lost possession in midfield led to the final goal. Cuadrado collected the pass and rushed toward the box, timing his shot perfectly to beat goalkeeper Wojciech Szczesny.

Poland got off to an aggressive start in the hot and humid Tatarstan capital, pressing high and winning most of the duels in the opening minutes.

Colombia gradually settled in, though, with Quintero providing attacking width and Cuadrado proving dangerous with his subtle moves on the edge of the box.

Colombia slowed the pace in the second half, showing good counterattacking qualities. Quintero came close in the 56th minute on the break, but his goal-bound shot took a deflection.

Cut off from the rest of his teammates, Robert Lewandowski had a few attempts but could not convert his rare chances.

Colombia is still alive ahead of its final match against Senegal and can still win the group, while Poland can only hurt Japan's chances of advancement.

Given his first start after fully recovering from a calf injury, Rodriguez lived up to expectations. He pressed relentlessly, tracked back and delivered an assist for Mina.

Rodriguez has now been directly involved in nine goals in seven World Cup appearances for Colombia, scoring six and assisting on three. He formed an excellent partnership with Quintero to create some beautiful play for Colombia.

Besides scoring, Mina was also excellent in containing Lewandowski throughout the match.

Poland played well for 15 minutes but then faded.

The team was overwhelmed in midfield and looked clueless in attack in another error-ridden display that resulted in an early exit.

Poland has now failed to keep a clean sheet in its last 10 World Cup matches, since beating Portugal 1-0 in 1986.

"The Colombian team was a much better team," Poland coach Adam Nawalka said.