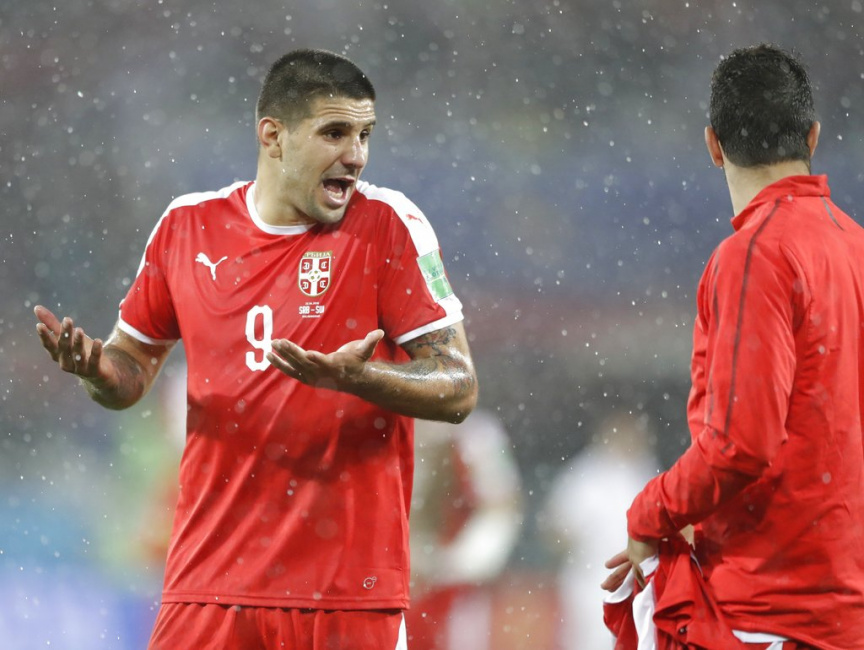 Serbia's Aleksandar Mitrovic reacts in dejection at the end of the group E match between Switzerland and Serbia at the 2018 soccer World Cup in the Kaliningrad Stadium in Kaliningrad, Russia, Friday, June 22, 2018. (AP Photo/Matthias Schrader)

KALININGRAD, Russia (AP) — A day after being put under investigation by FIFA for complaining about the refereeing of their 2-1 World Cup defeat by Switzerland and misbehavior by fans, Serbia's football association has filed an official complaint with the sport's governing body alleging "biased officiating" by referee Feliz Brych.

In a statement posted on its website Sunday, the Football Association of Serbia said it submitted to FIFA "seven videos that clearly showed tendency in officiating of the referee Brych to the detriment of our national team."

Serbian officials have complained vociferously since Friday's match in Kaliningrad that their team was not awarded a penalty for a second-half challenge by two Swiss defenders on Aleksandar Mitrovic and that Brych did not consult the Video Assistant Referee about the incident.

They also have complained that Brych showed four Serbia players yellow cards but only one Swiss player was booked. That complaint was repeated in its official communication to FIFA.

Serbia escalated the dispute by questioning not just Brych's performance, but the fact that he was appointed to handle the match at all.

"We are not clear how the German referee could have been appointed for the match between Switzerland and Serbia, when it is well known that one of Swiss confederation cantons is a German canton," Serbia said in its statement.

The game already has generated controversy centered on nationalist hand gestures made by Switzerland players Granit Xhaka and Xherdan Shaqiri following their goals. Both players also are under FIFA investigation after celebrating with a hand signal of the double-headed eagle on the Albanian flag.

Both goal scorers have ethnic Albanian Kosovo families. Kosovo is a former Serbian province whose 2008 declaration of independence is not recognized by Serbia, leading to ongoing friction between the Balkan neighbors.

But potential anger at the provocative hand gestures was far outweighed by Serb indignation at Brych's failure to consult the VAR system.

"At this World Cup, VAR has been used in all matches and its advantages have been applied to numerous disputable situations," the Serbia FA statement said. "We are wondering why Serbia is the only team at the World Cup with the referee who would not even check the replay of the disputable situations, and all to the detriment of our team."