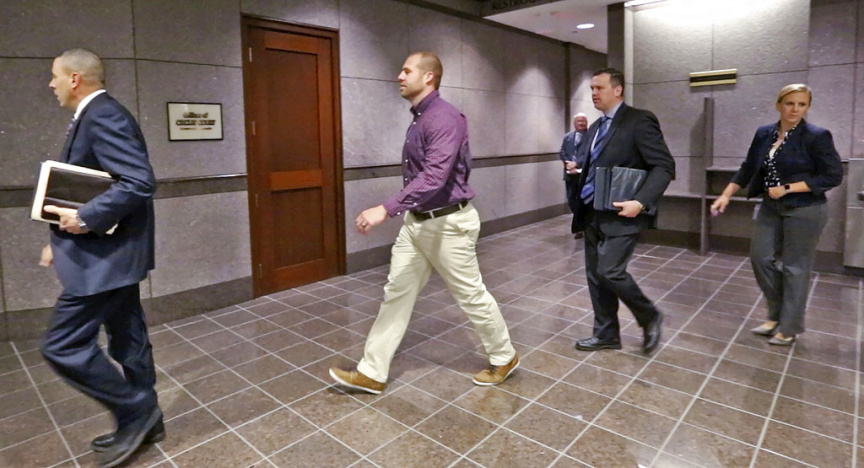 Hamilton County Prosecutor Lee Buckingham, from left, leads others including Noblesville West Middle School teacher Jason Seaman to the courtroom to attend the initial hearing for the accused school shooter, at Hamilton County Government and Judicial Center, Monday, June 11, 2018, in Noblesville, Ind. Seaman was shot in the incident as was a student, Ella Whistler. Seaman is credited for stopping the shooter. (Kelly Wilkinson/The Indianapolis Star via AP)

NOBLESVILLE, Ind. (AP) — A judge has delayed the fact-finding hearing of a 13-year-old boy accused of shooting another student and a teacher at a suburban Indianapolis school.

The Indianapolis Star reports that the boy's attorney asked Hamilton Circuit Court Judge Paul Felix to delay the hearing, which is similar to a trial. It had been scheduled to begin Monday and last four days. It hasn't been rescheduled yet.

The 11 charges the boy faces include two counts of attempted murder for the May 25 attack at Noblesville West Middle School. He's accused of shooting teacher Jason Seaman and 13-year-old Ella Whistler. Authorities have said Seaman tackled the boy to stop the shooting.

The Associated Press isn't using the boy's name because he's charged as a juvenile.

Information from: The Indianapolis Star, http://www.indystar.com

'Black teen killed by police more than a hashtag'