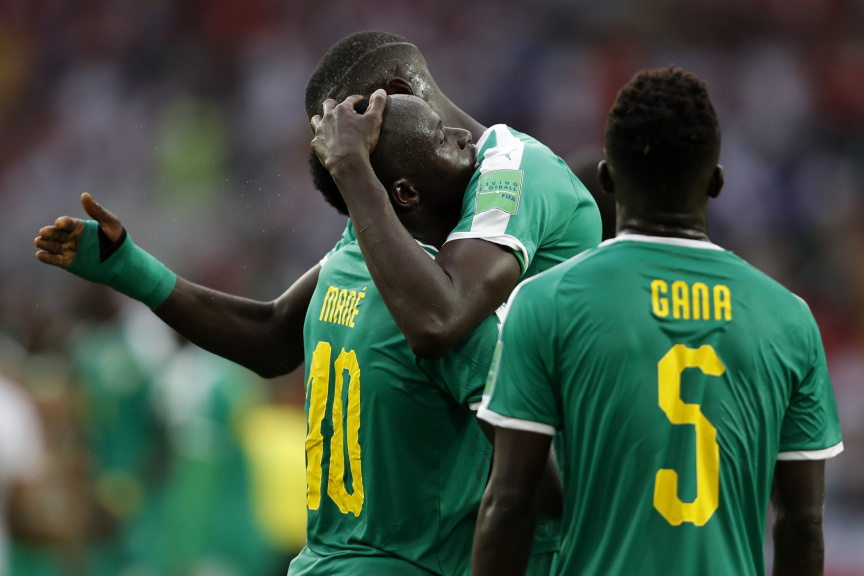 MOSCOW (AP) — Senegal midfielder Mbaye Niang saw the signal from the referee to re-enter following treatment for an injury and jogged along the center line. Then Niang noticed Poland's Grzegorz Krychowiak loft a backpass to Jan Bednarek, who hadn't realized Niang was back on the field.

Niang outsprinted goalkeeper Wojciech Szczesny to reach the ball about 40 yards from the net, knocked the ball forward and tapped it in for Senegal's second fluky goal of the night. The Lions of Teranga held on for a 2-1 win over Poland and opened the World Cup with a surprising victory — just like in 2002.

"You have to deserve your luck," Niang said. "We were rewarded today for our work. You have to seize your chances when they are given to you."

Senegal became the first African team to win at this year's World Cup after Egypt, Morocco, Nigeria and Tunisia were outscored 6-1 in losses.

It went ahead in the 37th minute when Thiago Cionek's attempted block of Idrissa Gueye's shot deflected and wrong-footed Szczesny, who was picked to start over fellow Arsenal castoff Lukasz Fabianski.

After Niang doubled the lead in the 60th, Krychowiak headed in Kamil Grosicki's free kick in the 86th minute, ending a streak of five straight scoreless openers for Poland.

"Two goals following our mistakes was something that we were very unhappy with," Poland coach Adam Nawalka said.

Senegal is tied for the group lead with Japan, which upset Colombia 2-1. Senegal will play Japan on Sunday, when Poland meets Colombia.

This win set off joy in the streets of Dakar.

"We are not too euphoric because we do know there is going to be a difficult match against Japan," Senegal coach Aliou Cisse said.

Senegal President Macky Sall was in the stands to watch the world's 27th-ranked team upset the eighth-ranked nation — and bring up memories of the 1-0 win over defending champion France 16 years ago.

"France and Senegal have a history," said Cisse, who captained the 2002 team. "France was the country that colonized Senegal."

Poland fans in red and white were about three-quarters of the crowd of 44,190 as their nation returned to the World Cup for the first time since 2006. Poland kept up its dismal streak of World Cup starts — it has four losses and three draws since beating Argentina in 1974.

Senegal took the lead when Niang went around Lukasz Piszczek on a flank following a restart and centered to Sadio Mane. The star midfielder passed to Gueye, whose right-footed shot from the arc headed toward Szczesny's far post. Cionek, near the penalty spot, lifted his right leg and deflected the ball past Szczesny's other side for the fourth own-goal of the tournament.

Poland shifted to a three-man backline at the start of the second half, and Niang had been off the field after Jan Bednarek stomped on a foot. Referee Nawaf Shukralla of Bahrain, a veteran of two World Cup matches in 2014, waved Niang to come back on the field just as Krychowiak lofted a backpass from the center circle to Szczesny. Niang let it bounce twice, knocked the ball past the goalkeeper and then sprinted to catch up as the ball bounced three more times. He tapped it into the open net from about 8 yards.

"Real unlucky situation," Szczesny said. "Usually they keep him on the sideline for a little bit longer."

Still, he didn't fault the referee.

"That's looking for an alibi for us," he said. "It was a silly goal from our point."

Nawalka attributed the goal to confusion, saying players thought a substitute was coming on.

"We simply lacked quality in the first half," he said. "There were lots of unnecessary mistakes and lack of accuracy, and simply we didn't play a very fluid football."

Senegal's Mane and Poland's Robert Lewandowski rarely threatened in quiet World Cup debuts. Lewandowski topped the Bundesliga in scoring in three of the last five seasons and while he had 16 of Poland's 28 goals in qualifying, he managed only one goal at the 2012 European Championship and one at Euro 2016.

Six of the top eight teams in the FIFA rankings failed to win their openers. Belgium and France are the exceptions.

The match was played at red-and-white Otkritie Arena, the 4-year-old home of Spartak Moscow, where Alexander Rukavishnikov's 80-foot (25-meter) bronze statue of Spartacus rises high. The Russian club is named after the Thracian gladiator who led a slave rebellion against the Romans.

Poland: Midfielder Jakub Blaszczykowski started limping midway through the first half, and his right calf was treated just before the restart that led to the goal. He was replaced by Bednarek at the start of the second half.