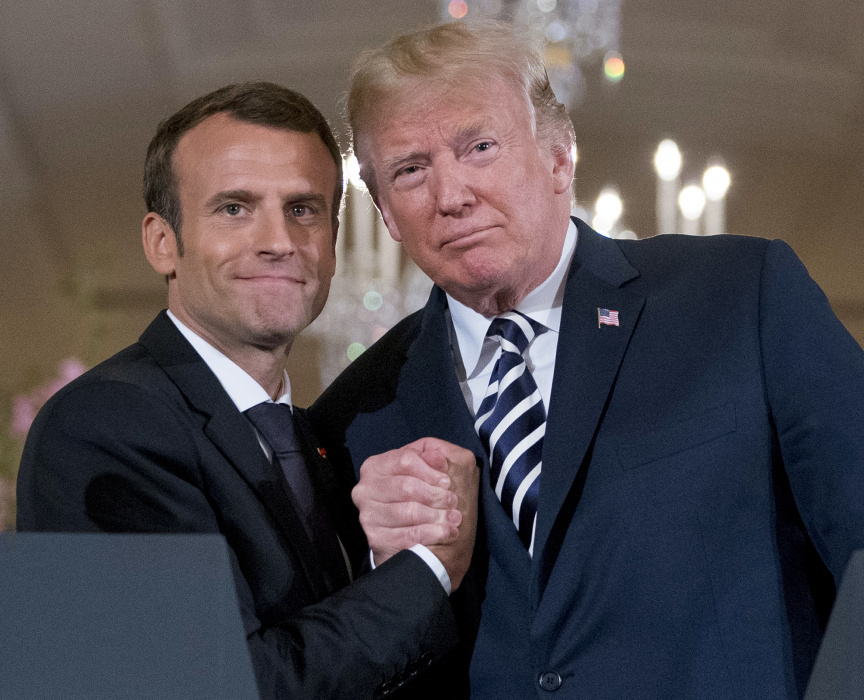 In this Tuesday, April 24, 2018 file picture President Donald Trump and French President Emmanuel Macron embrace at the conclusion of a news conference in the East Room of the White House in Washington. (AP Photo/Andrew Harnik, File)

PARIS (AP) — French President Emmanuel Macron is seeking to take the lead of the European brigade against U.S. President Donald Trump at the summit of the Group of Seven wealthy countries in Canada.

He told reporters the United States' attitude must lead other nations to "reforge the European front."

European leaders criticize the U.S. decision to impose protectionist tariffs on steel and aluminum and to exit the Iran nuclear deal and the Paris climate agreement.

Tweeting in English, Macron stressed: "No leader is eternal. We inherit commitments which are beyond us. We take them on. That is the life of nations."

Adopting an unusually sharp tone about one of France's closest allies, Macron rejected the idea of an American "hegemony".

European Council President Donald Tusk, who will attend the meeting of EU leaders, said in the New York Times this week "Europe must now do everything in its power to protect the trans-Atlantic bond, in spite of today's mood. But at the same time we must be prepared for scenarios in which we will have to act on our own."

Macron's initiative comes six weeks after Macron and Trump exhibited their friendship at a state visit in Washington — with exaggerated handshakes and a pair of kisses.

The two leaders talked on the phone last week after Trump announced U.S. tariffs on European goods. Macron declined to disclose details of the discussion after an unnamed source told CNN television it went badly.

He instead repeated the famous line attributed to 19th-century German statesman Otto von Bismarck about laws and sausages: "It's best not to see them being made."

And he promised a "frank and direct discussion" with Trump in Canada.

Macron tries to arrange a meeting with Trump and Iran

Suspect in girl's killing returned to Germany from Iraq