Manafort accused of trying to tamper with witnesses in cases 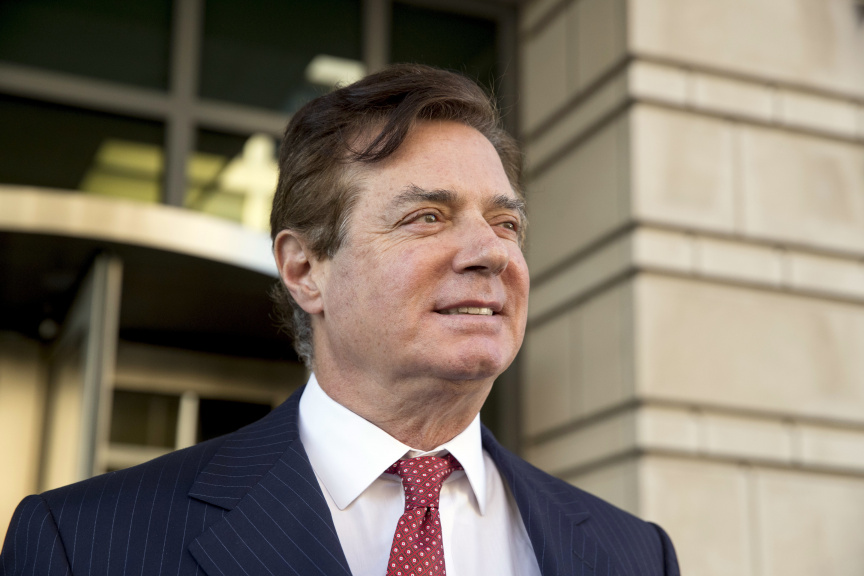 WASHINGTON (AP) — Former Trump campaign chairman Paul Manafort made several attempts to tamper with witnesses in his ongoing criminal case, prosecutors said as they asked a federal judge to consider jailing him while he awaits trial.

In a court filing Monday, prosecutors working for special counsel Robert Mueller wrote that Manafort and one of his associates "repeatedly" contacted two witnesses in an effort to influence their testimony. The contacts occurred earlier this year, shortly after a grand jury returned a new indictment against Manafort and while he was confined to his home.

The filing marks the second time that Mueller's team has accused Manafort of violating a judge's order in the case. Late last year, federal agents discovered that Manafort was attempting to ghostwrite an opinion piece in Ukraine even though he was under a gag order in the case.

The allegations of attempted witness tampering relate to Manafort's criminal case in Washington where he faces charges of money-laundering conspiracy, false statements and acting as an unregistered foreign agent for Ukrainian interests. He also faces bank fraud and tax evasion charges in Virginia.

The charges — they involve tens of millions of dollars routed through offshore accounts — do not relate to his work on the Trump campaign or involve allegations of Russian election interference.

In the latest court documents, prosecutors say that while he was under house arrest, Manafort and his associate attempted to get two witnesses to lie about the nature of lobbying and public relations work they carried out at Manafort's direction on behalf of Ukraine.

The court documents do not name Manafort's associate, but they refer to him as "Person A" and note the pseudonym is consistent with previous filings in the case. In earlier filings, Person A has referred to Konstantin Kilimnik, a longtime Manafort associate who prosecutors have said has ties to Russian intelligence.

Kilimnik, who has denied having connections to Russian intelligence agencies, was also involved in the ghostwritten op-ed matter, which prosecutors also connect to Person A in the latest filing.

The two witnesses were also not named in court filings. But prosecutors say they were principals in a public relations firm that worked with Manafort in organizing a group of former European officials, known as the Hapsburg group, who promoted Ukrainian interests in Europe as well as the U.S.

The group's work factors into an indictment against Manafort that accuses him of acting as an unregistered foreign agent by lobbying in the U.S. on behalf of Ukrainian interests. Prosecutors say Manafort directed the group's work and secretly funneled more than $2 million to it to take positions favorable to Ukraine including by lobbying in the U.S. without disclosing that they were being paid to favorably represent the country.

Manafort has denied any wrongdoing and pleaded not guilty. Several members of the Hapsburg group have previously denied the allegations.

According to the court filing, Manafort began messaging and calling one of the witnesses in February shortly the unsealing of the indictment that included the allegations of unregistered lobbying related to the Hapsburg group. Around that same time, Manafort's co-defendant and longtime business associate, Rick Gates, pleaded guilty and agreed to cooperate with prosecutors.

The day after Gates' plea, Manafort messaged and called one of the witnesses and continued reaching out over the next several days, according to a sworn affidavit filed by an FBI agent in the case.

In one call, the agent wrote, Manafort said he wanted to give the witness a "heads-up about Hapsburg." The individual immediately ended the call "because he was concerned about the outreach," according to the affidavit.

On Feb. 26, Manafort sent the person a series of messages through an encrypted application, including a link to a Business Insider story with the headline: "Former European leaders struggle to explain themselves after Mueller claims Paul Manafort paid them to lobby for Ukraine." Another message said, "We should talk. I have made clear that they worked in Europe."

The witness told investigators that he interpreted Manafort's efforts to reach him as a way to influence his potential statements. The person believed from his experience that the Hapsburg group lobbied in the United States and knew that Manafort knew that as well, the agent wrote.

Court papers also accuse Person A of making several attempts to influence the witnesses' testimony in February and later in April. That month, Person A wrote to one of the witnesses, "My friend P is looking for ways to connect to you to pass you several messages." He then asked if that could be arranged.

The witness told federal agents that Manafort and Person A were also trying to get the witnesses to tell members of the Hapsburg group that if they were contacted by anyone, they should say the group only performed lobbying and public relations work in Europe. Both witnesses said that wasn't true.

Trump lashes out at scientists for contradictions

Man who met Trump has virus; no plans to test Trump

Trump says he spoke to a Taliban leader

Trump: getting rid of ''bad'' people made me successful

US President Trump apparently not a fan of ‘Parasite’

Guatemala volcano death toll up to 69, expected to rise